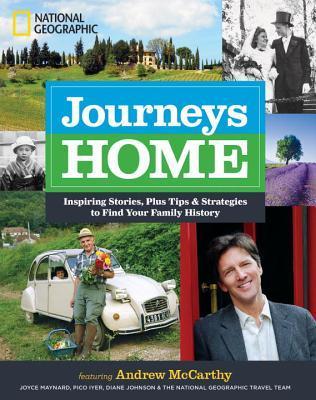 Journeys Home: Inspiring Stories, Plus Tips and Strategies to Find Your Family History

3.72
85 ratings16 reviews
Rate this book
Addressing the explosive growth in ancestral travel, this compelling narrative combines intriguing tales of discovery with tips on how to begin your own explorations. Actor and award-winning travel writer Andrew McCarthy’s featured story recounts his recent quest to uncover his family’s Irish history, while twenty-five other prominent writers tell their own heartfelt stories of connection. Spanning the globe, these stories offer personal takes on journeying home, whether the authors are actively seeking long-lost relatives, meeting up with seldom-seen family members, or perhaps just visiting the old country to get a feel for their roots. Sidebars and a hefty resource section provide tips and recommendations on how to go about your own research, and a foreword by the Genographic Project’s Spencer Wells sets the scene. Stunning images, along with family heirlooms, old photos, recipes, and more, round out this unique take on the genealogical research craze.

37 books460 followers
Andrew McCarthy is a director, an award winning travel writer, and—of course—an actor. He made his professional début at 19 in Class, and has appeared in dozens of films, including such iconic movies as Pretty in Pink, St. Elmo’s Fire, Less Then Zero, and cult favorites Weekend At Bernie’s and Mannequin.

He has starred on Broadway and on television, most recently appearing in The Family, on ABC. McCarthy is also a highly regarded television director; having helmed Orange is the New Black, The Blacklist, Grace and Frankie, and many others.

Simultaneously, McCarthy is an award winning travel writer. He is an editor-at-large at National Geographic Traveler, and has written for The New York Times, The Wall Street Journal, The Los Angeles Times, The Atlantic, Travel+Leisure, AFAR, Men’s Journal, Bon Appetit, and many others. He has received six Lowell Thomas awards, and been named Travel Journalist of the Year by The Society of American Travel Writers.

His travel memoir, THE LONGEST WAY HOME, became a New York Times Best Seller, and the Financial Times of London named it one of the Best Books of the year. He served as guest editor for the prestigious Best American Travel series in 2015.

His debut novel, JUST FLY AWAY, will be published by Algonquin in the spring of 2017.

3.72
85 ratings16 reviews
5 stars
19 (22%)
4 stars
30 (35%)
3 stars
30 (35%)
2 stars
5 (5%)
1 star
1 (1%)
Displaying 1 - 16 of 16 reviews
Lori
1,164 reviews32 followers
June 1, 2021
National Geographic brings us this book, published in 2015, on heritage tourism. Using journalists' stories about their family history, each takes a trip to an ancestral home. Some authors followed better genealogical practices than others did. Some simply relied on family stories which may or may not be correct. A few made their journey based on National Geographic's now-defunct DNA test. I was disappointed the well-documented stories of well-regarded genealogists who also know how to write were not included. Most stories contain a "Connections" sidebar which often includes restaurants or recipes and a "Get to Know" sidebar providing information about the country. A brief "Genealogy 101" section and country-specific research tips are included after the stories. The country-specific information is often too brief to be all that helpful, but it often points to the FamilySearch wiki which remains useful and updated as more and more microfilm and records are digitized around the world. Some information, of course, is dated. For example, National Geographic no longer offers their DNA test. There are a couple of new players in the field and a glaring omission of 23andMe as a DNA testing company. The best books on genetic genealogy have been written since the book's publication, making that section dated. Some major digital repositories for some countries seem to be missing, but some of these may have come online since the book's publication. The book appeals more to a recreational genealogist than addicted ones.
Lauriann
404 reviews4 followers
August 26, 2015
EVERYBODY HAS A STORY. In this book, twenty-six writers shared their ancestral stories by journeying to a country that unlocked their family history. Some of the writers had a strong spoken or written trail to that special spot and some had very little to go on. But each one persisted and connected in a very special way. I was most touched by Juan's story. As a small, frightened child he was put on a plane, alone, in Cuba to land in the United States with a passport stamped "Indefinite voluntary departure," which was another way of saying his parents wanted him to have a better life. He took his most precious toy with him, a small train engine. Lost in the Miami airport, he realized he no longer had his train with him and efforts to find it failed. HIS journey fifty years later took him back to Cuba and in a miraculous moment, that little train was placed in his hands. And this is only one of the stories. This book is history, geography, memoir and heart, all between two book-ends. This Fall I will be traveling to Italy to be present when a "birthplace plaque" is affixed to the home of my great-grandfather (a musician), who could fish in the Mediterranean from his window. Reading this book was an impetus to saying "yes" to this opportunity and sharing in his life journey which ultimately became my story, too.
Deb Ruth
25 reviews
April 1, 2015
Could not put this one down! Wonderful tales of family history and amazing glimpses of spots around the globe. Some stories made me laugh some shed a few tears. Strongly recommend for the family historian and folks wondering about their heritage.

J. Tayler Smith
84 reviews
August 24, 2020
It’s a nice, light, and easy read. The stories are fairly intriguing and inspiring, especially for the person wanting to learn more about their family history. I’m this book won’t offer any life-changing, or thought-provoking ideas, but it’s good for a more casual reading experience!
Denise Kruse
1,004 reviews11 followers
March 18, 2017
Great personal stories (although some of the readers were rather stilted). There is indeed something about discovering from whence we came. The genealogy tips at the end are spot-on.
RHPL Adult Reference
84 reviews4 followers
Read
June 8, 2015
This book is half travel and half genealogy. There are 26 chapters, each written by a different author and each one covers the author’s personal journey to discover their family’s history. Most of the essays have a personal ring to them as your learn about each family’s problems and reasons for leaving their native land.

The book is a good introduction to genealogy-oriented travel and would make a good read for anyone intending to make such a journey. The book has two possible audiences: 1) anyone who’s interested in genealogy; 2) those who like good memoir and travel writing.

This is a one-of-a-kind book without much in the way of actual read-a-likes. Similar, but much broader in scope, are historical memoirs that span generations, such as the “Roots,” by Alex Haley.

Linda
1,149 reviews
June 24, 2016
Published by National Geographic, twenty-six writers tell of their journeys to other countries in search of family ties. The book can be read as a travelogue, but I read it because of my interest in genealogy. Beautiful photographs help tell the stories, of the countries as well as the people. Some of the places visited are Croatia, Cuba, England, Germany, India, Japan, Laos, and Tanzania. My only complaint with the book is the very small print but I suppose that the print size made room for more pictures! 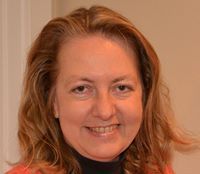 Carolyn Schott
Author 15 books3 followers
April 9, 2015
It's always great to read a book and think, "I wish I'd written this one!" A fabulous collection of stories from people traveling to the ancestral home and discovering (or re-discovering) their roots. Every writer had some sort of "ah ha" moment in their travels that made them feel closer to their family roots.
Mike Niebrzydowski
99 reviews2 followers
December 11, 2015
I always want more, but it was interesting to read some of the stories. I think the first story, which was the longest (by far) spoiled me for the rest. They also end the book with some general genealogy tips and specific tips on the featured places.

Jeanine
274 reviews
October 20, 2015
Really fun book with about 20 articles written by people who were going to their respective homelands to explore their roots. The end of the book has a "how to" chapter for everyone. The stories were poignant and lovely. Am very glad that I read this book.
Jim Blessing
1,092 reviews8 followers
May 17, 2015
This national geographic book was a decent read.

May
476 reviews8 followers
August 12, 2015
A collection of personal stories of returns to ancestral lands. Made me wistful for a trip of my own.
Pat Lampe
1,258 reviews1 follower
February 5, 2016
Good collection of stories about the home countries of a number of people including Andrew McCarthy himself. Beautiful photos and interesting to read an essay or two at a time.
Anita
Author 15 books9 followers
August 29, 2016
Wonderful tales of personal journeys in ancestral footsteps

Tanya
284 reviews26 followers
March 13, 2015
A really fantastic compilation of stories from people who have searched out their family history.
Dlmrose
1,358 reviews62 followers
April 3, 2017
3.5