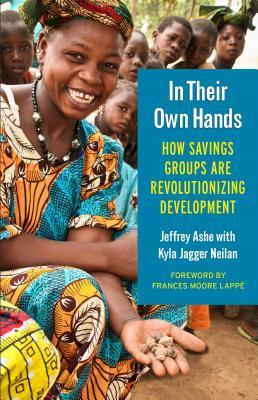 In Their Own Hands: How Savings Groups Are Revolutionizing Development

4.22
23 ratings5 reviews
Rate this book
Two and a half billion people worldwide, most of them desperately poor villagers, need a better way to save and to borrow. Even the most innovative banking institutions can't reach them; savings groups can. In savings groups, members save what they can in a communal pot and loan their growing fund to each other for their short-term needs. Jeffrey Ashe and Kyla Neilan illustrate how these savings groups form and function and how little "outside" support is actually required for their success. Drawing on decades of Ashe's personal experience, this book describes how he developed Saving for Change, which leveraged the wisdom and strength of group members to train and establish new groups. This model has impacted the lives of 680,000 people across five countries. Savings groups are a "catalytic innovation" that bypasses subsidies, dependency, and high costs while effectively reducing chronic hunger, building assets, and empowering the community. Today, saving groups have 9 million members around the globe -- with minimal support, membership could grow to ten times this number.

In an even reasonably rational world, In Their Own Hands would serve as the Bible for development professionals and the basic textbook for students, philanthropists, faith-based activists, and business executives who aspire to improve the lives of poor people. Though this book advocates a particular methodology to promote financial inclusion, it’s the best overall introduction I’ve ever read to working with poor people in the Global South. If you have any interest in this topic, whatever your background or perspective, you owe it to yourself to read this brutally honest book.

author of "In Their Own Hands," about working with poor people
Jeffrey Ashe
In Their Own Hands represents the distilled wisdom Jeffrey Ashe has acquired over half a century of work with poor people across the globe. Ashe’s experience in fighting poverty began in his mid-twenties as a Peace Corps Volunteer in rural Ecuador and has continued seamlessly through the ensuing decades. During most of that time, he was one of the world’s leading practitioners of microfinance, with a career that began working for Accion International in Latin America several years before Muhammad Yunus’ rediscovery of the concept in Bangladesh. Then one fateful evening thirteen years ago at Brandeis University, where Ashe is now a faculty member, he attended a lecture by a woman named Marcia Odell, director of the Women’s Empowerment Program at Pact, who had introduced a novel approach to financial inclusion in rural Nepal.

The method she described, village savings groups, had originally been developed by CARE in 1971 in Niger, but it was Odell’s presentation that brought it to the center of Ashe’s attention. Savings groups struck him as a brilliant answer to the shortcomings he had witnessed in microfinance. Ashe finagled a contract to evaluate her program in the field, and soon afterwards he began designing a similar effort to introduce into the desperately poor West African nation of Mali. Now, little more than a decade later, due in no small part to Ashe’s influence, “there are savings groups with ten million members in at least a hundred thousand villages in sixty-five countries.” The leading NGOs that have spearheaded the effort — Oxfam America, Freedom from Hunger, CARE, Catholic Relief Services, Plan International, the Aga Khan Foundation, and Pact — have recently dedicated themselves to a collaborative effort to reach fifty million people by 2020.

The key to understanding savings groups is that they do NOT represent a method to end poverty, as some of their more extravagant boosters have suggested. As Ashe explains, “Joining a savings group will not lift many out of poverty — no development initiative can deliver on that promise — but regular savings and a reserve of cash can help reduce life’s uncertainties.” To those of us who enjoy privileged lives in the Global North, that benefit may seem trivial. However, to the global poor, it can seem a lifesaver — which is why savings groups have spread so readily and persisted for so long in so many countries. “In Mali,” Ashe notes, “despite a coup, an insurgency in the north, a severe drought, an influx of refugees, skyrocketing food prices, limited opportunities for work outside the village, and faltering institutions, few Saving for Change groups have disbanded while many new groups have been trained by volunteers. Similarly, groups in Zimbabwe survived hyper-inflation, and groups in Nepal thrived after the withdrawal of outside support and a Maoist takeover of the region.”

Ashe cites “nine principles needed for success” that can be applied to any economic development effort, not just village savings groups:

Start small to learn, but plan for scale.
Simple is better than complex.
Build on what is already in place and already widely understood.
Design for change that persists long after outside agents leave and that spreads from village to village without outside staff.
Keep costs low.
Give nothing away.
Insist on local control.
Establish high performance standards and insist on meeting them.
Build learning and innovation into program design.

Somebody should carve these precepts onto thousands of granite tablets and erect one set above the doorway of every NGO, every development agency, every university, every multilateral institution, and every business that seeks to improve the lot of poor people around the world.

For the record, Jeff Ashe and I have been friends for nearly fifty years, since we met in a Philadelphia hotel room for Peace Corps orientation. We worked together closely in Peace Corps training in Puerto Rico and, after a year in-country in Ecuador, we teamed up with several fellow Volunteers on a project Jeff inspired to help implement that country’s new agrarian reform law. There are few people anywhere in the world for whom I have more respect than Jeff — or longer experience to justify it.

Kelly Stenhoff
1 review
Read
July 6, 2015
I’ve heard it said that purest and most sustaining form of community development is when an impulse to do service comes to you as an implementer/outside agent and you serve as nothing more than conduit for this energy. Ego or strong self-identification with the project does not enter the picture. When the ribbon is cut, the ululations ring out, and the dancing begins your name is not mentioned. The community takes full credit and full responsibility. You may be present at the ceremony but at some point the planned project reached a stage in which it took on a life of its own. No one knows you had anything to do with it in the beginning.

It is in this spirit that Jeffrey Ashe approaches his life’s work. Through patient observation, protracted learning, humility and sensitive light-handed intervention, Mr. Ashe has contributed to the design of a powerful savings group approach that is community-led, replicable, and scalable by virtue of participants who believe in it so greatly that they take it up on themselves to spread it. In “In Their Own Hands,” Mr. Ashe takes us takes us on a journey from his initial spark of interest in the power of savings groups on to discovery and inquiry of active savings group initiatives and then his own leading of Saving for Change for Oxfam and Freedom from Hunger initiatives. He shows us through case studies and anecdote how the guiding principles of Savings for Change create success and he demonstrates us how the project evaluation was structured to gauge impact according to the participants’ own definition of wealth.

This is an excellent book for those interested in community-led, strengths-based development as a counterpoint to more conventional models and microfinance. “In Their Own Hands” is written with humility and a refreshing honesty. More than once it is stated that the sole act of joining savings groups will not lift many out of poverty. While this is true, the financial function is only a small part of the equation. The savings groups are in fact foundational. Therein lies their power and the true extent of their impact. They provide a pre-existing, strong, inclusive network of people who share a bond of trust and deep commitment to their communities that can serve as a basis for other development initiatives to latch onto for increased effectiveness. The approach carries many intangible benefits that extend beyond financial transactions such as social cohesion, political action, raising the profile of women’s voices, nurturing leaders and building trusting relationships. I find this heartening and compelling.
Kris
301 reviews41 followers
October 5, 2014
GOODREADS WINNER

I am not sure what I expected when I received this book. I suppose I was thinking of lots of great narrative stories of how the idea of a savings group that starts from actual savings rather than debt can change lives. I did get that, which is awesome. But this book is more than just stories - it is action. How these lives have been changed, and what steps can be enacted to follow in Mr. Ashe's footsteps. It is a how-to for those in development who specialize in microfinance and for those interested in ways of elevating the poor into a higher economic sphere.

For the rest of us out there not focusing on microfinance in developing countries it is still an important and moving book but... a little less for the masses. This is a treatise that is for the informed international worker, student, activist that want to enact a change in the world from the bottom up. It is a great resource for teaching material but fell a bit flat for me, someone with a more casual interest in the subject. I fear I am not quite the right audience for this book for all that I do, in fact, work in the non-profit sphere. I appreciate the sentiment and I definitely am glad that I can view the world in a slightly different manner by picking this book up but unless I was planning on working in development in a more campaign-related way it is more informative than action-related for me. I am not in the position to be out in the field in a developing country but if I were - or if I felt the call of Peace Corp - then I would definitely want to bring this book with me.

This is a rather hard review to write as I wanted to give this book a 5-star review but to me this book is definitely a "like" rather than "it was amazing". I think that falls more to me and where I currently am in my life than to this book. It is a good solid book with good solid ideas that would become amazing in the right hands. I'm sorry to say that those hands are not mine.

Naomi
1,379 reviews265 followers
December 25, 2014
Sharing principles for one great strategy that helps poor people save and mobilize money, recommended for those interested in community development.

Penny
65 reviews5 followers
January 18, 2017
Interesting and intriguing for great ideas to help other countries raise money for themselves in practical ways
Displaying 1 - 5 of 5 reviews