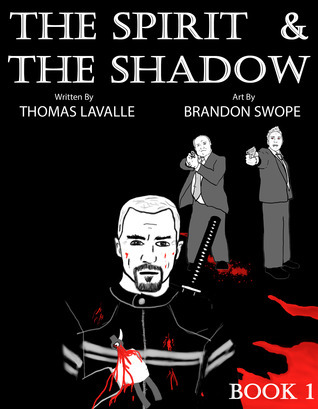 The Spirit and The Shadow

4.50
10 ratings5 reviews
Rate this book
A fast-paced, paranormal suspense thriller from a new creative team that keeps you on the edge of your seat as you are pulled into the chase for a vampire by those who want his secret, others who are out for justice, and one man seeking revenge.

In a world where vampires and humans coexist, Detectives Aiden Lawson and Robert Garrison are after a vampire wanted for murder. This accused vampire is also hunted by the murder victim's brother, an assassin gone rogue from his clandestine agency. What these men will learn, is that this vampire has a secret – a secret that very powerful men and vampire alike will go to great lengths to acquire. The story follows the paths of these individuals as they uncover the truth. THE SPIRIT AND THE SHADOW is a mash-up of conspiracy and paranormal genres with suspense, vengeance, and BLOOD!

1 book1 follower
I am a first time writer. I also surf, read comics, and I’m a dedicated father and husband. If you’re interested in paranormal suspense - take a chance and check out my book!

To learn more about me, my collaborators, our work, and/or to contact us... check out our website:

4.50
10 ratings5 reviews
5 stars
5 (50%)
4 stars
5 (50%)
3 stars
0 (0%)
2 stars
0 (0%)
1 star
0 (0%)
Displaying 1 - 5 of 5 reviews
Vin Varvara
Author 3 books3 followers
October 17, 2014
The Spirit & The Shadow by author Thomas Lavalle and illustrator Brandon Swope is an ambitious project that features the vampire detective Aiden Lawson and his human partner Robert Garrison as they traverse the seedy Los Angeles underground in search of a killer. Unknown to both detectives Lawson and Garrison a simple homicide investigation soon turns into a much larger plot of revenge, covert organizations, and a plot by a secret society--- once implemented can leave the vampire and human worlds in desolation.

This story is reminiscent , to this reader, of the old Forever Knight television series where vampire Nick Knight was a detective and solved homicide crimes. But what author Lavalle did in this story was modify the concept adding new layers to the legend of the vampire and what it means for someone who has been chosen to become a vampire. The story itself was a gripping page turner where there was a twist on almost every page leaving the reader wondering what was going to happen next. Especially with the final plot twist at the end of the story.

Pros: I greatly enjoyed reading The Spirit & The Shadow for many reasons; one being that Lavalle is telling a hard boiled true detective story. Another pro is just the adding of layers to the mythology of the vampire, making the vampires more interesting than what we have seen lately in film and television. Lastly, as I said at the beginning of my review The Spirit & The Shadow is an ambitious project because the format of the book is neither prose novel nor a sequential comic book story. The story itself is formatted as a play with illustrations by Brandon Swope. I find this format to be unique as I usually see stories of this magnitude as either a prose novel or comic book graphic novel. This was a refreshing take on story telling.

Cons: My only criticism of this story is the art work by Brandon Swope. All art is subjective but in this reviewer's opinion if the illustrator can put more detail into his work and work on mastering anatomy this story would have reached the five star mark.


But please don't let this minor criticism prevent you from picking this story up. This is a must read for anyone who is into hard boiled detective stories, vampires, conspiracy stories, or anyone who wants to read a really well written and thought out story!
Caffee K.
Author 5 books33 followers
October 18, 2014
I was given this book in exchange for an honest review.

With the legalese out of the way, I honestly was stunned when I finished this book.
My first though when I came to the "to be continued" line was: What?!? There's got to be more!
My second thought was: Oh, my WORD! I was literally left speechless when I finished.
My third thought was: Where is the next? I want to know what happens, and will willingly get it once it becomes available.

Though this was my first encounter with a graphic novel, I cannot say I was left disappointed at the end. The characters are well developed, the plot has plenty of depth, along with many twists and turns, and the artwork does a wonderful job filling in for the missing volumes of prose.

In skimming through the other reviews before posting my own, I noticed several mentioned the art work - some good, some not so happy - but I think the simplistic style selected for the book was well chosen. Simplistic, if you consider the art work in both "Kill Bill" or "Sin City" simplistic. Sketches of the scene with just enough detail to carry the important parts into the next bit of text. It felt like a wonderful blend between the two.

I also enjoyed the different take on vampires. These are not your typical "genteel evil" or down right "Evil monster" vampires much of the vampire writers have gravitated towards. In this story, the vampires are honest folk who have to earn a living, just like everyone else. They just have a slight time constraint for what hours they work.

And, I also found it enjoyable? Funny? Who the ultimate villain is. I won't tell, that would spoil the fun, but I definitely did not see this one coming, even with the hints that emerge just before the big "reveal" at the end.

Wonderfully done, and I hope others find it as enjoyable as I did!

Sharon
389 reviews17 followers
June 13, 2014
Lavalle and Swope have created a new kind of graphic novel experience that they call a “hybrid” and will satisfy the graphic novel reader and the prose reader. It reads like a screenplay with artwork throughout. I really enjoyed this medium. It took a little getting used to at first, but soon I was reading along quickly.

The Spirit and the Shadow is an urban fantasy crime story in a world where vampires and humans co-exist. Detectives Aiden Lawson, a vampire, and Robert Garrison, a human, start investigating a murder case involving a vampire. There are many twists and turns as more characters are brought into the story and they are all intertwined. It had me turning pages to find out what happened next.

My only problem was with the artwork. The use of the artwork to compliment the prose, where it was placed throughout the story the content of each panel and the use of only grayscale and red was excellent. But the artwork looks like it was lifted from a high schooler’s notebook cover. Not a lot of depth to them.

I will give two ratings for the graphic novel.

Story and concept: 4 1/2 Sheep
Artwork: 2.5 Sheep
http://www.ismellsheep.com/2014/06/co...
Michael Cairns
Author 39 books157 followers
June 29, 2014
I thoroughly enjoyed this book for a number of reasons. I liked the mix of comic and prose, I engaged with the characters and I thought the concept of the vampire division of the police force, with its 'mixed' pairings of detectives, was excellent.
The concept follows two detectives, one vampire and the other human, as they become embroiled in a conspiracy far larger than they originally thought. It also involved a classic mysterious hard man who is both entertaining and interesting and comes complete with sassy assistant, and a whole host of vampires and mystery, behind-the-scenes nutjobs.
The art style is not to everyone's taste, but is well done and supremely suitable for the text. All done in black and white save for the liberal splashes of red, the art works well with the night time setting and the atmosphere of film noir that permeates the detectives' business.
The story itself is nicely built as the book progresses and had me guessing as I went along, which is rare for me. The ending is also terrific and I'll say no more than that. :)
As far as I'm concerned, any book that involves vampires being defanged through the use of pliers is going to be a good read and I'm looking forward to the second in the series.

Andretta Schellinger
Author 3 books42 followers
September 28, 2014
I really liked this book/graphic novel/play almost. Here is the deal, it is written almost like a play with each character having their name preceding what they say. The only thing missing is the "exit stage right" although this could be a really good play. It is designed like a graphic novel in that it has images but the words go around the images not on them like most graphic novels. It is like a book, but there are a lot of pictures and fore-mentioned method of conversation.

This is the first book of a series and I would enjoy reading the rest, I mean the first page was kinda blah, but once you get into the story it is good. The graphics are cartoonish versus super realistic in facial reactions and eye color of the vampires. Although knowing that they have red eyes makes it a lot easier to discern who is a vamp and who isn't.