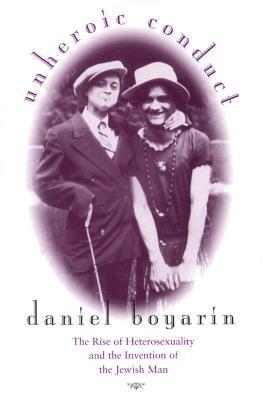 Unheroic Conduct: The Rise of Heterosexuality and the Invention of the Jewish Man

4.21
70 ratings11 reviews
Rate this book
In a book that will both enlighten and provoke, Daniel Boyarin offers an alternative to the prevailing Euroamerican warrior/patriarch model of masculinity and recovers the Jewish ideal of the gentle, receptive male. The Western notion of the aggressive, sexually dominant male and the passive female reaches back through Freud to Roman times, but as Boyarin makes clear, such gender roles are not universal. Analyzing ancient and modern texts, he reveals early rabbis—studious, family-oriented—as exemplars of manhood and the prime objects of female desire in traditional Jewish society.

Challenging those who view the "feminized Jew" as a pathological product of the Diaspora or a figment of anti-Semitic imagination, Boyarin argues that the Diaspora produced valuable alternatives to the dominant cultures' overriding gender norms. He finds the origins of the rabbinic model of masculinity in the Talmud, and though unrelentingly critical of rabbinic society's oppressive aspects, he shows how it could provide greater happiness for women than the passive gentility required by bourgeois European standards.

Boyarin also analyzes the self-transformation of three iconic Viennese modern Jews: Sigmund Freud, the father of psychoanalysis; Theodor Herzl, the founder of Zionism; and Bertha Pappenheim (Anna O.), the first psychoanalytic patient and founder of Jewish feminism in Germany. Pappenheim is Boyarin's hero: it is she who provides him with a model for a militant feminist, anti-homophobic transformation of Orthodox Jewish society today.

Like his groundbreaking Carnal Israel, this book is talmudic scholarship in a whole new light, with a vitality that will command attention from readers in feminist studies, history of sexuality, Jewish culture, and the history of psychoanalysis.

33 books52 followers
Daniel Boyarin, Taubman Professor of Talmudic Culture and rhetoric at the University of California, Berkeley, is the recipient of numerous awards and fellowships. His books include A Radical Jew, Border Lines, and Socrates and the Fat Rabbis. He lives in Berkeley, California.

4.21
70 ratings11 reviews
5 stars
30 (42%)
4 stars
28 (40%)
3 stars
10 (14%)
2 stars
1 (1%)
1 star
1 (1%)
Displaying 1 - 11 of 11 reviews
Dasha
254 reviews5 followers
April 15, 2022
This book, while long, provides a new perspective on how ethno-religious groups constructed gender norms, particularly in relation to dominant cultures. While certainly more context for Freud and Herzl, especially on the broader culture of which they lived in, may have been helpful for readers the book does an excellent job showing how Judaism contracted its own idealized male that opposed western gender norms, only to assimilate that male into western culture in the nineteenth century. His writing is easy to read despite the complexity of his arguments. Writing on Freud and Herzl’s hope for Zionism to represent a fulfilment of assimilation he states, “It was a return to Phallustine, not to Palestine” is both witty and poignant and demonstrates Boyarin’s unique way of writing (p. 222).
I enjoyed Boyarin’s section on women’s subordination under Judaism through their exclusion from Talmudic studies, which mirrored how Christianity subordinated women through their economic isolation in the domestic sphere. Boyarin does an excellent job demonstrating how the patriarchy developed within Rabbinic Judaism was not necessarily beneficial to women, despite appearing to be a “gentler” patriarchy. As well, Boyarin’s analysis of Freudian theory was intriguing. However, one can only read so many paragraphs analyzing Freud’s “anal fertility” before they forget how this relates to the construction of the “New Jewish man” (p. 203-205).
Jack Raslich
5 reviews
April 16, 2022
Phallustine was enough for the 5er
Jo
87 reviews29 followers
September 17, 2016
I’m not a fan of Freud, to put it mildly ... so I'm reluctant to give the book 5 stars because of the lengthy chapters on psychoanalysis and Freud’s odd theories. A point in Boyarin’s favour is that he, while not exactly pulling Freud’s work to pieces, points to his - partly hidden - misogyny, homophobia and internalised antisemitism. And most importantly, he dismantles the Oedipus complex. (No, I just can't take this theory seriously.)

Apart from this "Freudian overdose", it’s quite an insightful book - in more ways than one. Boyarins remarks on Herzl's internalised stereotyping of the Ostjuden and his comments on Zionism (especially his claiming that "Zionism in its discursive forms and practices is very similar to colonialism") may be controversial, but they do make you think.

However, the chapters on the ideal of the „rabbinic, counter-manly male ideal“ were the ones that I enjoyed reading the most. The passages from the Talmud that Boyarin, by his own definition a "male feminist Orthodox Jew", chose were rather eye-opening in the light of his conjecture that "some kind of gender-crossed identification" might be "constitutive of Jewishness".

I don't particularly like reading academic texts, but this book was quite a treat.

Elliot
85 reviews32 followers
February 21, 2021
Some incredibly productive theses that, if they were the foundation of a new Jewishness, would end up being something really special. But, the book is a bit mired in its obsession with Freud and Freudian discourses — I get why examining this stuff is helpful in making the book’s principle argument, but it’s just not as engaging as the stuff on Herzl and the Talmud. (The chapters on the Talmud are a particular treat, showing how much gets erased and how Westernized modern conceptions of Jewish faith are.)

Read for thesis
mark
132 reviews1 follower
April 15, 2019
The principal thesis of the book is that the social and gender roles and ideals of Jewish Europeans differed from those of Christian Europeans, with male gender roles in Jewish society less idealizing of strength and power and more idealizing of intellectual activity. This led to the rejection of the latter by some modernizing fin-de-siècle Jews and their movements, e.g., Herzl and Zionism, and Freud and psychoanalysis. Boyarin takes as his hero, Bertha Papenheim, otherwise known as Anna O., Breuer's patient, who, according to Boyarin's reconstruction, cured herself of her "hysteria" by rebelling against the passive role required of women by bourgeois society, and becoming one of the founders of the feminist movement in Germany in the early 20th century - while remaining an observant Jew. Boyarin, himself querr and also an observant Talmudist, sees her story as showing one way out of the oppressive components of traditional orthodox Judaism.

Liz
1,410 reviews33 followers
Read
July 12, 2020
There's a reason that, from academia's perspective, there's a certain amount of question about what Boyarin IS, in terms of discipline, because he's somehow always exceeding the boundaries of what one would think a field is.
It's not a critique, by any means, but it is an invitation to think about his writing as straddling the Talmudic, historical, literary, and confessional.
Which is appealing (you mean you can DO that? Yeah, when you're Daniel Boyarin.)
In terms of content - his reading of edelkayt is deeply compelling, his overall project of constructing historical complexity and archeology of viewpoints is hard not to appreciate even as his consistent pulling back of what the project CAN be often ends up - inevitably and paradoxically - increasing its power.
But it's Boyarin as the figure at the center of the text - responding to his own history and conclusions and the part of Judaism that have shaped him - that pull the whole thing together and create a narrative whole.

Jasper
187 reviews
March 5, 2020
An incredible and enlightening book with so much insight into Judaism, sexuality, gender, and the ways in which they overlap. Boyarin articulates a reality that has frustrated me for quite some time — the unfortunate dismissal and erasure of Judaism in conversations about gender and queerness in the "secular" world paired with the blatant sexism and homophobia rampant in much of the Jewish community. While Boyarin spectacularly frames these incredibly nuanced conversations, I must say I am disappointed to see so much of his rhetoric framed around cisnormative standards, and I was struck by his use of the exclusionary term "lesbigay" as well. Going out of his way to cut the "T" from LGBT when his entire work revolves around subverting and transforming gender norms serves no purpose other than to ensure these conversations remain in cis hands, effectively gatekeeping and removing trans people from the equation. Doing so strikes me as incredibly narrow-minded and counterproductive, especially when Boyarin dedicates several pages to Jewish men being perceived as "fake women," or "castrated," or "men who menstruate" because of their circumcision! Overall, Unheroic Conduct remains a very informative and transformative read — I just wish Boyarin had taken his argument farther.

Nate Merrill
45 reviews2 followers
January 5, 2019
I didn't get any of the Freud stuff, but some of it was made clear through the comparison to Herzl, which was very good. Boyarin balances the self hating aspects of zionism with the ostensibly liberatory aspects of it is a way that seems very applicable today, especially as he tries to balance the current state of Judaism with what he wishes it could be (feminist, non-patriarchal, etc). Can this model of Jewish masculinity be rebuilt after centuries of assimilation - not just into non traditional ideas of gender, but also into whiteness in the US? Plus, today, where mainstream Judaism is not orthodox in the US, what connection do people really feel 200 year old ideas from Eastern Europe? Is (re) building this culture possible without also upending tons of other oppressive systems? I don't think so!
Zak
29 reviews3 followers
June 30, 2017
There are some brilliant readings in here, but at times I was a bit confused on the relevance of certain sections to his main point, though I suppose that everything was at least somewhat connected. I think as well that a failing of the book is to bring in the perspectives of modern biology and psychology. To read the symptoms of Bertha Pappenheimer's "hysteria" as a result of her feminist feelings seem slightly implausible to me. Though I do take some comfort in that Boyarin, like myself, seems to find more meaning and strength in Jewish diasporized life than in contemporary Zionism.

Shulamith Farhi
252 reviews46 followers
November 14, 2022
The Talmudic readings are good. The main argument, that Jewish men are masochistic, is probably true. In case you want to argue against sexism, this is a useful example, since it suggests that gentiles have a different understanding of rape fantasies than Jews. The readings of French feminism went over my head a bit, but I think the gist, that phallic mythology corresponds to Christianity, is correct. The defense of the idea of nobility (Edelkayt) is compelling. I will probably read it again eventually.
Daniel Burstyn
18 reviews1 follower
October 24, 2022
This is one of the most important books I have read. Oddly, the topics examined in it are coming up again now, nearly 30 years later. Boyarin examines Jewish models of masculinity as acts of resistance to the increasing oppression that Jews experienced in European and western modernism in the 20th century.
Displaying 1 - 11 of 11 reviews