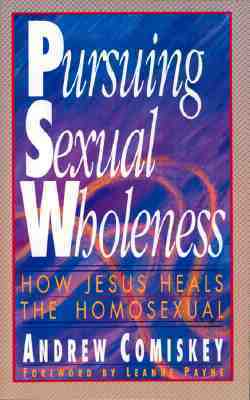 3.92
25 ratings4 reviews
Rate this book
Real help for Christians who struggle with homosexuality and for those who minister to them. "This book is a product of author Andrew Comiskey's Living Waters program...Pursuing Sexual Wholeness and its companion guidebook present Comiskey's teaching to the church at large."

3.92
25 ratings4 reviews
5 stars
13 (52%)
4 stars
5 (20%)
3 stars
2 (8%)
2 stars
2 (8%)
1 star
3 (12%)
Displaying 1 - 4 of 4 reviews
Andrew
7 reviews
September 12, 2007
This book sows hope and victory and freedom for anyone who desperately wants to follow Jesus, but finds themselves encumbered by their flesh, specifically by sexuality. In today's sex-charged culture, this is so important. This book was instrumental in my finding how to approach God with this very-human part of myself, and I know MANY others with a similar testimony.
Aronkai
57 reviews
April 25, 2008
I read this for one of my my classes. Below some quotes:

1. Although Adam and Eve had clear access to God, He realized they needed something more. So He provided for each a gift of the other. And He graced them with an inspired recognition of the limitations of self and a yearning for something greater in union with the other. (page 37)
2. Thus, the Genesis creation account reveals several key themes. First, God races us with His image. We don’t attain to the image; it’s a gift of God. Second, the molding of the male and female reveals God’s image. The complementarity of the two sexes reflects a fullness of being that same-sex union cannot reflect. Within that complementarily, sexual yarning can be blessed. (page 41)
3. The realignment of desire is fundamental to the healing process. Perhaps this explains the relative lack of success achieved by traditional psychotherapy in “curing” homosexuals. A person wrestling with a life-dominating network of desires and distorted self-perceptions cannot be healed by mere analysis of the soul. That soul needs to be encountered by its Creator and bathed in His love, according to His original intention. Romans 1:18-32 makes a strong case for this. The apostle Paul explained the powerful role of the Creator in maintaining sexual order and described the sexual chaos that results when individuals shift their focus from the Lord to the creature. (pages 52-53)
4. Jesus is God’s agent of freedom for the person whose divine image is marred by homosexuality. He created us to reflect Himself, and where Satan and sin have defamed that image, He prepares the way for its repair. He also realizes how utterly helpless we are to restore that image ourselves. He knows our tendency to disobey Him.
5. That fundamental willingness to seek first the kingdom rather than illicit pursuits is a key to healing. For strugglers and helpers alike, the degree of willingness must be ascertained. Otherwise, the motivation of those seeking help may remain veiled. They may be wasting their time and the helpers’ time also in pursuing sexual resolve when they still want the immediate returns of homosexual pleasures. In spite of everyone else’s agenda fro them, they may not be ready to get free. (page 74)
6. The paradox here is that God’s strength is realized upon the admission of weakness. In other words, the homosexual tendency becomes a channel of God’s strength once submitted to Him. This is similar to Paul’s boasting about the thorn in his flesh in 2 Corinthians 12:9-10. Here the apostle described why the Lord did not remove his thorn, or weakness: “He said to me; ‘My grace is sufficient for you, for my power is made perfect in weakness.’ Therefore I will boast all the more gladly about my weaknesses, so that Christ’s power may rest on me. That is why, for Christ’s sake, I delight in weaknesses, in insults, in hardships, in difficulties. For when I am weak, then I am strong.” (page 95)
7. But obviously, it is not enough to be aware of one’s neediness. Strugglers need a place to go with their vulnerability. That’s where confession of one’s sexually addictive tendencies to God and trusted others is essential. Addiction creates a kind of moral blindness. Having conceded time and again to the false object of desire, the heart becomes deceitful, unwilling and almost unable to disengage from its own destructive cycles. That’s when strugglers must cast themselves upon the care and “sight” of others. Sexual addicts must admit, “I can’t really trust myself in this area.” (page 150)
8. Two keys can be drawn from this realization. First, since Jesus is the goal, personal wholeness is not. Our priorities must bee ordered correctly. When strugglers make perfect heterosexual responsiveness the mark, they subordinate Christ’s call to discipleship to a static psychological ideal. They become increasingly whole as they will to follow Him; sexual reorientation occurs out of spiritual conversion. A much greater calling lies before us all than mere heterosexuality. (page 188)
Bec
478 reviews1 follower
April 4, 2021
Really, this book looks at addiction and brokenness with a focus on same sex attraction. It's a good book, doesn't do the hellfire and brimstone BS commonly used to attempt to scare people into "not misbehaving", but talks about healing, uncovering trauma or early inappropriate relationships and how they impact on the now adults ability to form and keep healthy relationships, and of course, the role of God and Jesus in the healing process coming from a place of love, not condemnation.

If you're dealing with any sort of sexual sin (premarital sex, adultery, pornography addiction, etc) I could see this book being helpful.
Debbie
56 reviews
June 29, 2009
the only thing better than reading this book is hearing andy teach live. i recommend this book to everyone.
Displaying 1 - 4 of 4 reviews