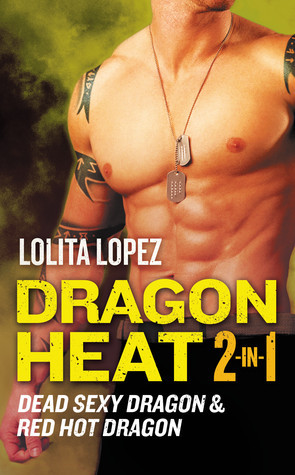 DEAD SEXY DRAGON
The last thing dragon shifter Stig Wyvern needs is his dead friend's kid sister showing up on his doorstep, especially since he's just minutes away from entering a mating phase. But Cora Cardenas has nowhere else to go. She's in deep trouble with some really nasty people and Stig is the only one who can protect her. Cora quickly realizes Stig is hiding something from her. To make matters worse, she's plagued with breathtakingly naughty dreams starring a shadowed lover who bears a startling resemblance to her host. And what the hell is going on in the basement at night? Stig needs to get Cora out of his house but his inner beast has other ideas. He's found his mate and she's not going anywhere.

RED HOT DRAGON
Griffin Cadogan is surprised when Avani Monroe, the sworn enemy of his dragon family, walks into his gym. With his mating phase approaching, the dragon shifter wonders why she risks coming into enemy territory. Yet the dark-eyed temptress shocks him even more with an outrageous demand: She wants him to help her have a baby. After her mother's dragon line was annihilated by the Knights, Avani vows to continue her unique dragon breed and Stig is perfect for the job. When they spar over the terms of her proposal, Griffin and Avani can't deny the intense, primal attraction they feel for each other. Soon lovers, the two discover the dragon slayers are coming . . .and they're gunning for Griffin, Avani, and the entire dragon race.

As a co-ed studying biochemistry and genetics at Texas A&M University, Lo dabbled in creating naughty tales to entertain her friends. Study for a midterm or pen a deliciously dirty story to delight her small band of fans? Not surprisingly, Lo is now on an extended sabbatical from college.

Lo lives in Texas with her family and beloved Great Dane, Bosley.

The characters had great chemistry due in large to their history/connection. There wasn't exactly a gradual progression of discovering feelings, but rather Stig was the only obstacle because of his secret. Cora was outgoing and brazen enough to make the first move (something I admire in heroines). If you want it, go for it. There's no use being timid and constantly wondering "what if?" I wouldn't say I connected with Cora, but I felt her reactions to each pivotal moment in the story was realistic, both the good and the bad. Stig had a lot more layers to him: his part in the Brotherhood, the duties he fulfilled in the Marines, his very close friendship to a human (Cora's brother), and the vow to keep an eye on her if anything ever happened to her brother. He was a man of honor and a beast with a hint of vulnerability.

I liked the plot too which was interesting in terms of the code of honor among the Brotherhood of the Green Hide. Aside from the secret Stig was keeping from Cora was the added burden that a Brother couldn't stray across species lines. The Brotherhood's duty was to protect other dragons from the Knights (of St. George), a band of dragon slayers. The sex was hot, but I preferred seeing the hero vulnerable to heartache and having the heroine come to an important fork in the road. I wish the hero and heroine had had a little more time to come to terms with the drastic changes in their budding relationship. It just seemed like the bubble burst a bit too soon. Other than that, the rest of the story kept a decent pace and was easy to follow.

A fun, sexy read and if you love dragon shifters, you'll enjoy this.

I enjoyed this second book in the series more than the first. It had a lot to do with the maturity of the characters and how they communicated with one another. When the blood feud between their families was mentioned, I worried at first that that would be the main obstacle or source of drama that would overshadow what they were trying to accomplish. Thankfully it wasn't really an issue. Since they had to spend their mating cycle in seclusion, they got to know one another in more ways than the biblical sense. Once they realized that feelings for one another were beginning to surface, I loved that they voiced those feelings instead of trying to hide them or talk themselves out of wanting more out of their arrangement. It may have been a little predictable that something would force Avani to embrace and use her serpent form, but it was nice to see her fight alongside her man rather than be one of those females who had to stay behind for her own safety. I love confident heroines and heroes who support them rather than coddle them. The sub plot involving Ian Maddoc hinted at something more dangerous than sneak attacks from the Knights so I am really looking forward to his story.

Disclaimer: I received an ARC from the publisher for the purpose of an honest review. The views and opinions expressed in this review are my own, and in no way represent the views or opinions of the publisher/distributor.

Red Hot Dragon
I liked Griff. He doesn't let others dictate what he does, he's caring, sweet and passionate. I was impressed that Avani goes after what she wants and when she opens herself up to Griff we get to see what a truly loving and loyal woman she is. I'm looking forward to more of the series.
Adult read
Kimberly Walter
1,636 reviews15 followers
March 16, 2014
Dragon Heat was really entertaining to read. It was hot and sexy. I love shifter books and dragons are one of my favorites. I am looking forward to the next one.
Mira Stanley
Author 12 books45 followers
March 25, 2015
This world of dragons and hunters is super fun. I enjoyed the two books in this set and will look for more in the series.