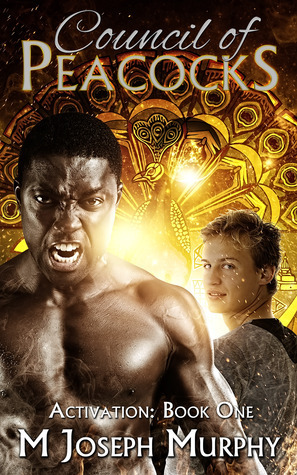 4.00
40 ratings17 reviews
Rate this book
There is a dark world, hidden in plain sight, filled with vengeful djinn and shadowy demons. The Council of Peacocks, a group of ruthless wizards, has plans for the human race.

For centuries they have plotted and schemed. Now, the moment of Activation draws near.

Wisdom, an immortal sorcerer, has gathered a band of hybrid youths with extraordinary powers. They are trained to stop the Council. But there’s something that Wisdom doesn’t know.

The Council is no longer working alone.

If Wisdom and his students cannot stop The Council, the world as they know it will cease to exist.

Council of Peacocks, a paranormal thriller, is the first installment of the Activation Series. Grab your copy now!

10 books54 followers
Joseph Murphy was born and raised in Ontario, Canada. He earned his geekdom at an early age. He read X-Men comics from at the age of 8 and it only went downhill from there.

As a teenager he wrote short stories and wanted to be the next Stephen King. Instead of horror, however, he kept writing fantasy stories. After surviving high school as a goth with a purple mohawk, he studied English and Creative Writing at the University of Windsor.

When not writing, Joseph works as Lead Accounting instructor at Everest College. He also lectures to other businesses on outside-the-box marketing. He lives in Windsor, ON (right across the stream from Detroit, Michigan) with his husband, two cats, and shy-but-friendly ghost.