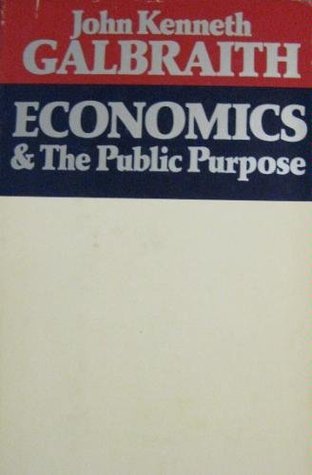 Economics and the Public Purpose

4.00
73 ratings5 reviews
Rate this book
Economics and the Public Purpose is a 1973 book by Harvard economist John Kenneth Galbraith. Galbraith advocates a "new socialism" as the solution, nationalising military production & public services such as health care. He also advocates introducing disciplined wage, salary, profit & price controls on the economy to reduce inequality & restrain the power of giant corporations. Socialisation of the "unduly weak industries & unduly strong ones" together with planning for the remainder would allow the public interest to be accorded its rightful preference over private interests. He adds that this can only be achieved when there is a new belief system that rejects the orthodoxy of economics in the past. The new socialism needs to be achieved thru gradual democratic political change.

150 books398 followers
John Kenneth Galbraith was a Canadian-American economist. He was a Keynesian and an institutionalist, a leading proponent of 20th-century American liberalism and democratic socialism. His books on economic topics were bestsellers in the 1950s and 1960s. A prolific author, he produced four dozen books & over a 1000 articles on many subjects. Among his most famous works was his economics trilogy: American Capitalism (1952), The Affluent Society (1958) & The New Industrial State (1967). He taught at Harvard University for many years. He was active in politics, serving in the administrations of Franklin Roosevelt, Harry Truman, John Kennedy, and Lyndon Johnson. He served as US Ambassador to India under John F. Kennedy.

He received the Presidential Medal of Freedom twice: one in 1946 from President Truman, and another in 2000 from President Clinton. He was also awarded the Order of Canada in 1997, and in 2001, the Padma Vibhushan, India's second highest civilian award, for strengthening ties between India and the USA.

Jalen Sowell
24 reviews
August 24, 2022
I bought this book on a whim in a used bookstore out of curiosity.

It took me about 10 pages to see where the author was going to end up. By the language he was using and the arguments he was already making, I could tell he was going to be advocating for some form of Socialism.

A large premise of the book is this idea that corporations have power that they used to manipulate the market and thus capitalism is ineffective Because it is always going to lead to just someone else manipulating the market for their own gain as opposed to the public good.

It all sounds good in a vacuum and if you are just a student of this and not thinking it through yourself it sounds easy to understand, but the problem is he completely ignores the fact that even when a large corporation has control over a specific market, the consumer still has freedom of choice to not use that same product or company. He talked a lot about GM. No one is making anyone buy GM vehicles. Just because they are large does it mean they are too powerful. They are powerful because people buy their stuff. His argument is that people only buy their stuff because they are powerful, but it is the consumer still that makes people powerful in a free market. Shifting power to the government is rarely ever the answer.
Paul W
172 reviews6 followers
May 15, 2016
There have been a number of books recently about the failures of market economics. You could be forgiven for thinking this is a recent concern following the global financial crisis (what the US calls the Great Recession). But this debate has been raging for decades, with one of the key contributors being John Kenneth Galbraith. Galbraith’s core conclusion in this book is that "left to themselves, economic forces do not work out for the best except perhaps for the powerful.’ (p ix)

Galbraith notes that much public policy is based on the assumptions of classical economics where market prices are established in competitive markets with many buyers and sellers. However in practice, the majority of economic activity falls outside the market system and occur in the ‘planning system’ where markets are determined by few sellers (what economists refer to as oligopolies). Neo-classical model denies the existence of corporate power whereas the accumulation and exercise of power over consumers and the states are key characteristics of entities operating in the planning system. This is more than evident to day in the concentration of players in certain industries (eg aviation, automotives, supermarkets, pharmaceuticals), the extent of corporate lobbying, and the size of government activity in the economy.
The relationship between the planning and the market systems, their unequal rate of development, and the exploitation of market forces by oligopolies and the resulting inequality in returns, are the central concern of this book.’ (p128) In the planning system power passes from the consumer to the producer. This results in: irrationally excessive production; distortions to income distribution; threats to the environment; and exploitation of consumers.
By their nature, oligopolistic entities operating in the planning system have two fundamental purposes:
1. protect their earnings; and
2. growth.
As organisations increase in size, they have increasing power in the markets, over community attitudes and in relation to the state which helps to protect their earnings.
Above a certain size, ‘members of the technostructure’ are rewarded by growth and scale rather than profits. This also results in a focus on acquisitions rather than organic growth. Galbraith argues that this explains the rise of the conglomerates, driven not by scale economies but simply by scale itself - propelled by CEO salaries determined by organisational size not shareholder returns.
One of the consequences of the level of activity occurring in the planning system is the increased role for the state. In neo-classical economics the state had a small subsidiary role. In oligopolistic markets the state is a large purchaser of products and services and has the potential to be decisive for the development of particular industries. The distribution of public resources reflects the power of the planning systems over the state. Locking in contracts, often with the state, becomes a core activity to protect an oligopolies profits, rather than production of sales.

Galbraith’s cogent arguments were being advanced during a period where the debate was between the free-market economists of the Chicago School (most notably Milton Friedman and Friedrich Hayek) and the neo-Keynesians (including Galbriath and Joan Robinson). Ultimately, Galbraith implicitly, and correctly, argues that the absence of true market economies means that there is a role for government regulation and public policy to address the

However he prescribes the wrong intervention. Galbraith concludes that because of the difference in economic powers the structure of the planning systems requires general wage and price control. These were adopted by Nixon in the US in the 1970s, but soon abandoned because they didn’t work.

With his focus on oligopolies, Galbraith ignores other free-market assumptions which in some ways offer an even more compelling argument for intervention: market failure (eg imperfect information) , externalities (such as pollution and environmental damage), and behavioural economics. These are much richer areas to outline why we need to temper free market economics and provide a guide to effective public policy.

Although written in the 1970s the arguments in this book as are important for people to understand now as they were almost half a century ago.

Nada
6 reviews
August 1, 2007
I'm not sure exactly which audience this book was intended for, but right now, in 2007, it's not especially worth reading. He often speaks as if a number of well-known economic theories did not exist, and makes very obvious oversimplifications. Maybe this book was intended to be a clarion call to the semi-educated? Economics without math for the politico?

Zachary
36 reviews6 followers
Want to read
November 24, 2010
My copy of this book literally fell apart so I'm putting it on hold for a while.
Displaying 1 - 5 of 5 reviews