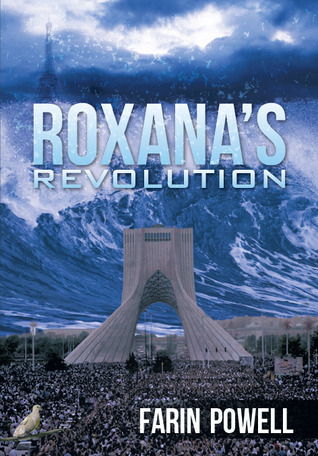 4.00
36 ratings8 reviews
Rate this book
“An ambitious novel of an Iranian woman’s personal and professional struggles during a time of war and unrest…Powell does a good job of capturing the intense emotions of a very dramatic time…a captivating plot with a well-developed protagonist.”

“I thoroughly enjoyed reading Roxana’s Revolution, a gripping story of individuals caught in events both inexplicable and out of control. We see the characters pulled between desire for something better for their beloved homeland and the growing knowledge that even worse is waiting for them, their friends, and their families. Eventually reality overwhelms, as it always does, even the most fervent hopes.

When the media frenzy over the hostage crisis of 1979 worsens and anti-Iranian sentiment surges all over the United States, Roxana, a Wall Street attorney has no choice but to return to Iran. During a stop in Paris, she meets Steve Radcliff, an American reporter with a tenacious attraction to her. Back in Tehran, where circumstances are nothing less than volatile, Roxana learns that revolutions while exciting and historic on pages of a book are painful to endure. As one crisis after other spins out of control, the government imposes wearing of a mandatory veil. This harsh revolutionary rule and Saddam Hussein’s invasion of Iran diminish Roxana’s hope to have a normal life. She rejects Steve’s marriage proposal and refuses to leave Iran with him. But a near- death experience and loss of her freedom in a border- sealed Iran propel her to enter a marriage doomed from its inception.

In this novel, an Iranian woman’s life comes full circle as she takes a journey through Europe, and back to the United States. A dire situation takes Roxana back to Paris where a life-altering surprise is waiting for her.

8 books10 followers
Farin Powell practices law in Washington, DC. In addition to many legal publications, she has published short stories and poems in various literary magazines and poetry anthologies. She is the author of the book of poetry A Piece of Heaven and the novel Two Weddings.

4.00
36 ratings8 reviews
5 stars
15 (41%)
4 stars
13 (36%)
3 stars
3 (8%)
2 stars
3 (8%)
1 star
2 (5%)
Displaying 1 - 8 of 8 reviews
Sally Wolf
Author 1 book25 followers
October 6, 2013
In 1979, Iranian students supporting the Iranian Revolution took fifty-two Americans hostage at the American embassy in Tehran. After the US embassy's seizure in Tehran, President Carter took drastic measures against Iran He boycotted the importation of Iranian oil, froze about $12 billion of Iranian assets in the United States, and demanded the deportation of all Iranian students whose visas had expired or who were not enrolled in school.
This book is about a woman who, even though she was a successful lawyer in New York, was deported back to her home in Tehran. What she found there was a place she hardly recognized.  Her beloved home no longer sparkled, the schools, shops, and people were drowning under harsh revolutionary conditions and war.  Despite all of this, Roxana found a good job and worked hard. She lived her life one day at a time through tragedy, hardship, and the unjust law forcing woman to wear a Hijab. This is a great book and I would highly recommend it to any woman out there who is trapped or is struggling to find herself. You should add this book to your library today and let the coo of Roxana's morning dove tell you the story about one woman's fight to be free.
Lis Ann - The Indigo Quill
216 reviews26 followers
May 9, 2015
Read full post @ The Indigo Quill: http://theindigoquill.blogspot.com/20...

This particular book struck a chord with me as my brother and sister are half Iranian, my brother being born in 1979. Although it didn't affect us directly (well, especially not me since I wasn't here for another 8 years), we do have many ties to their side of the family over there to this day. Since I wasn't here until later, and although this book is technically fiction, it really educated me on the historical (and present) aspects of the Iranian (or Islamic) Revolution. I think this is a useful read for everyone.

Roxana's Revolution is the journey of a woman caught up in the American hostage crisis in Iran. A lawyer in the United States, Roxana chooses to return to Iran where she isn't viewed as the 'enemy' during the international crisis. We are taken through a journey of life, loss, and strength as she discovers what it is to be in the middle of the war. It is thrilling, epic, and I think there is something we could all learn from it.

I, personally, love history. I love education. I just like knowing stuff. I will spout out a slew of information even if it pertains to absolutely nothing just because it's an interesting thing to know. Not that this is useless information, because it definitely applies to us all more than we may think it does. This is why I got engrossed within the pages of Roxana's Revolution. Although the story is meant to be fiction, I knew I was learning something as the story was unfolding. It was gripping and I feel more educated on the matters of what I see on the news every day than I did before. Farin Powell did a beautiful job painting the picture of the Iranian Revolution with grace and eloquence. She shows us how it has influenced the changes that Iran has faced since.

Like I said, my siblings are part Iranian. So at least second-hand I can understand how it feels for them to be put in a certain grouping for something they really have no connection with other than their immediate family (who actually spend a lot of time over here anyway). They will get phone calls or letters in the mail although they've never put on any paperwork what their ethnicity is. They have been American ever since the day they were born. I can imagine how it would be for someone living here being caught up in the whirlwind of prejudice without any control over it.

I would recommend this book for everyone, for the sake of understanding. Although it's explaining history, that very history has much influenced the things we see on the news today. Fantastic book. This is one I would read again.

Gigi Frost
Author 3 books11 followers
August 9, 2013
The book commences on a tumultuous situation for Roxana, an attorney who receives a letter that could threaten the very fabric of her existence.

It becomes clearly evident during the initial chapters that this book carries a huge weight of political and emotional turmoil. The frightful events that become a national struggle are well delineated throughout the story.

Roxana makes a complicated decision that ultimately throws her smack dab in the middle of an entirely different war. This book gives a new perspective to certain old prejudices and sheds light on an international incident that changed course of history in both Iran and America.

Powell has developed a bold, unusually rich tale based mainly on historical fact, her expansive research and knowledge is apparent throughout this novel. The narration carries the reader through several lives, showing a backdrop of cultural significance that has often gone missing. Sensitive issues are given a voice and displayed without hesitation.

The reader will follow a mesmerizing tale of love, identity, and circumstance.

I have had this book in my possession for over a year and a half so I apologise to the author for not getting to it sooner.

This is not an easy review to do. I could talk about the inequality in both Iranian and American judicial processes when women are involved. It actually would be topical for me to do so.

The fact is that I found this book as one of the most thought provoking reads I have had in a long time. It raises issues about the Iranian Revolution and the Iran/Iraq war that many westerners are unaware of. It deals with the before, during and aftermath of these things expertly. It deals with the hatred some Americans have for other races and how some religions and cultures have been excluded from the USA before.

There are a lot of reasons to read this book. I would recommend that as many people as possible do. A definite 5 star read and a huge recommendation.

Angie ~aka Reading Machine~
3,148 reviews130 followers
November 13, 2013
I wasn't sure what to expect when I started reading this book. I vaguely remember Hostage Crisis in Iran as child but that's about all I remember. Reading this book was an eye opening experience for me personally. Every culture has their own unique issues, traditions, and taboos. Experiencing Roxana's life and witnessing it has given me a better understanding into my own life. Roxana's Revolution is thought provoking book that explores every aspect of female life thru oppression, abuse, subtle slights, racial profiling, and many more issues. I hope to apply what I learned about myself in this book to my life as soon as possible.

Sara Ramezani
26 reviews
May 28, 2014
I loved this book and enjoyed the smooth and reach legal arguments in it. All so real and true which you could say the author has done a great research on the subjects and/or perhaps experienced some of the events herself! I just could not relate to the French/ Italian Singer!
Pat
55 reviews1 follower
May 17, 2015
the story really resonated with me; thanks goodreads!