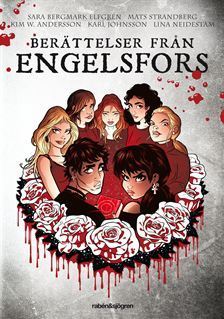 24 books599 followers
Mats Strandberg is an award-winning novelist and journalist. He is a regular columnist for Sweden's biggest evening newspaper, has been named Columnist of the Year by Sweden's Newspapers and Magazines organization, and had published three previous novels, with rights sold in numerous countries.

Melker Ljung
23 reviews
November 9, 2021
As a fan of the first two novels in the Engelsfors series, I looked forward to this visual novel. Well, it pleases me well enough to refresh my memory of the town and characters from the main novels, though the narrative doesn't seem to move onwards from repetition of familiar stories. There are a few new glimpses, things mentioned in passing in the books were expanded upon, and most interesting I think, we get among the other characters' stories, a brief story about Elias.

The "Chosen Ones" (pardon, I don't know what their name is in the English translation) all figure in the stories told here, plus some stories about other characters, all kept brief, sadly rushing some stories along too fast. There's a reason why it's all told in segments, and one that I like.

In the end, I don't see what the "hints at the future" shown here is getting at, and I thought them quite dull. I will say though that if you heard this comic book was a suitable introduction to Engelsfors, start with The Circle. This comic has lots of big spoilers and isn't as good as the main novels (and hey, check 'em out if you haven't, they are magnificent!!).

Also, comics aren't what I usually read but I was fairly disappointed in the art here. I was looking forward to the depictions of things, I wanted to see Engelsfors and the rad girls. I find the cartoony artstyle most irritating, it's jarring to me with the mature themes of the Engelsfors series.
Xantippa Amaya
85 reviews2 followers
June 15, 2019
This graphic novel was average to me. I really love the books in the trilogy however this was just OK.

Firstly, the art style is not my cup of tea. It looked and felt off. It is mainly the faces and how they are painted that I didn’t enjoy. The colors were good however!

The stories were OK as well. We found out about things that happened at the spring prom in 9th grade and how they tie in with the future. We learned a little more about Elias and Rebecka. We learned about Adriana and Simon, well we learned more about it. We got to read about Linnéa and Vanessa in present time. Finally, Minoo gave us a look at the future.

The stories itself were just OK, nothing too great. I think we could’ve done without it but as a fan of the book series I can still appreciate this.

Emelie
159 reviews50 followers
December 10, 2016
I enjoyed visiting the world of the witches of Engelfors. I found it pleasantly surprising that the illustrators had managed to capture the essence of the characters and their looks matching to how I had pictured them while reading the original books.

It was a beautiful drawing style and it was fun to get glimpses of the background stories and snippets of stuff from other people's POV.

Fredrik Strömberg
Author 14 books53 followers
March 13, 2014
This is an interesting, and strange little book. Interesting because it's been created by two very successful Swedish novelists together with three very accomplished Swedish comics artist, drawing several of the shorts stories each that makes up this book. Reading the stories it becomes evident that this whole graphic novel has been created not as a job for hire for the cartoonists, but that the process has been much more inclusive, as each comic reflect their respective strong sides as artists. And the art is beautiful, showing skill and dedication above and beyond duty. All three cartoonists are on a high international level in this difficult to master, realistic style.

The book is strange, though, since it's not really a freestanding volume, but presupposes having read the famous trilogy that the novelists have written. I have not done so and even though I can mostly grasp what's going on, it's quite evident that I would have gotten much more out of it if I had.

So, the writing is fine, the art is excellent, but this just isn't my cup of tea.
TheHornedSkull
41 reviews
February 1, 2020
I made the mistake of picking this up and reading through it twice before even realizing that not only was it based on a book series, but a book series readily available to me just a few shelves away.

But it did make me want to jump head-first into that series, so mission accomplished!

The art style varies a lot, as there are different cartoonists working a couple of chapters each, or just a single one. Meaning that you'll probably find an art style that will appeal to you personally. I know I found several pages I couldn't stop looking at.

The stories give some much needed fleshing out of motivations for a lot of characters. Many of the stories even feel like they were parts of the books that were forgotten, and the author duo panicked and had this thrown together!
And I'm not complaining. Beautiful visuals and good story telling make this a worthy addition to my book shelf!
Displaying 1 - 30 of 77 reviews
More reviews and ratings