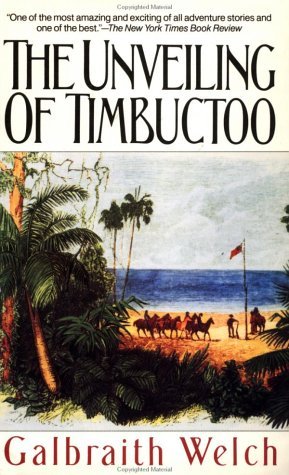 The Unveiling of Timbuctoo

3.87
15 ratings2 reviews
Rate this book
This is the remarkable story of Rene Caillie, a young Frenchman, who in 1828 became the first European to reach the unknown, sacred city of Timbuctoo and escape alive. His is one of the most extraordinary adventures ever undertaken. But his journey was so impossibly dangerous that for years his account was dismissed as a fabrication. In 1934-35 Galbraith Welch set out to prove the truth of Caille's incredible journey. To do so she retraced his path and here recounts the fact of his thrilling travels.

3.87
15 ratings2 reviews
5 stars
6 (40%)
4 stars
5 (33%)
3 stars
1 (6%)
2 stars
2 (13%)
1 star
1 (6%)
Displaying 1 - 2 of 2 reviews
Sheffner
94 reviews2 followers
August 25, 2020
Remarkable. Ms Welch retells Frenchman Caillie’s story, based on his notes and diary, which he made and kept secretly on pieces of paper he hid in his Koran. She did this because, she wrote, that Caillie’s own style was so deadpan and low-key that readers would not get the flavour of the immensity, danger and excitement of his incredible journey. Ms Welch has added to Caillie’s story by using notes she took during her own voyage to replicate the Frenchman’s route in the early part of the 20th century, but has also made good use of other observers, some contemporary with Caillie’s, some later, some earlier, in order to give the reader a more rounded picture.

For example, at one point she uses other sources to describe the reign of terror of a particularly ferocious local leader who ruled and rampaged in an area that Caillie traveled through some decades earlier. While this of course does not form part of Caillie’s own journey, it gives a certain flavour and hints at the kind of dangers that existed in that part of the world at that time.

I have not read Caillie’s own version, but I did notice one point where Ms. Welch strayed perhaps too far from her task: she mentions as fact that Caillie met a certain man in an African town. A couple of pages later she admits that Caillie makes no mention of meeting this man in his account but that it impossible that they did not meet! Oops, careful. Towards the end story, she refers to Caillie and an English explorer being in the same coastal town at the same time, but notes that neither of them mention a meeting, and surmises that although they were aware of each other, they simply did not move in the same social circles (Caillie was an impecunious French middle-to-lower-class youth, unsponsored by any government, university, society or military, while the Englishman, like many English explorers, was a military man with funds, so this supposition is reasonable).

Ms Welch uses other sources to tell the reader what happened to other explorers trying to get to (or out of!) Timbuctoo, knowledge not available to Caillie at the time.

An excellent book overall, and a gripping tale once it gets going, after a rather slow start.
Siffy Torkildson
Author 2 books1 follower
March 7, 2018
What an amazing story of the first European to reach Timbuctoo and tell about it, René Caillié takes several years of studying the Muslim ways and living with the people to be about to disguise himself as a Muslim and make his way to Timbuctoo, and out alive. He braves starvation, fear of discovery and death, illness and more. A remarkable journey of survival.
Displaying 1 - 2 of 2 reviews