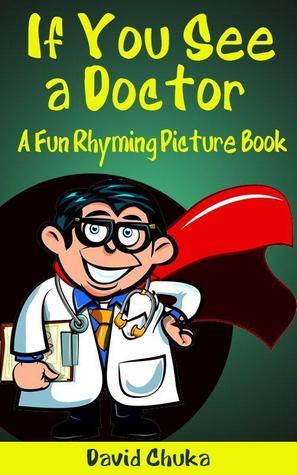 If You See a Doctor: A Fun Rhyming Picture Book

3.56
18 ratings8 reviews
Rate this book
This book is perfect for bedtime and also for your loved ones who are learning to read.

In If You See a Doctor, children will learn about different professions accompanied with beautiful color illustrations.

Young children will be encouraged to think about what they want to become when they grow up and parents can expand upon what each profession entails.

18 books278 followers
David Chuka lives in London with his lovely wife and two adorable children. His family are usually the first people to hear his funny and quirky tales. While he has written non-fiction material previously, he is absolutely proud to be called a children's book author. He loves writing stories that educate and entertain.

As a father himself, he has parents at heart when he writes. Bedtime has to be one of the best parts of the day for him as it gives him the opportunity to bond with his little ones. He believes you'll enjoy sharing his stories with your loved ones.

He would like to keep you updated on what he's working on and any giveaways he has on offer. Please subscribe to his newsletter at www.davidchuka.com

He has so many stories to tell and can't wait to share them with the world.

Sandra Stiles
Author 1 book68 followers
February 11, 2013
The story starts off with a young boy explaining his mom had just had a baby and he wondered what baby animals were called in the animal kingdom. You have a page with an illustrated picture of an animal. When you turn the page you get a realistic picture of the real animal, what they are called and an animal fact. For example a baby lion is called a cub and lion cubs are born helpless and blind. Haylee read the first two pages and exclaimed, “No Way! This is a non-fiction book, cool!” She read a page and then said the name of the animal and tried to get her brother to repeat the name. It was wonderful watching them interact together with a book.

Steph
501 reviews53 followers
July 23, 2013
This is a very appropriate book for small children whose minds are wanting to be filled with knowledge. At an age where children ask numerous questions, this book will do well to help children learn about different careers and illustrates something that has to do with each respective career. I also think that the illustrations will help children to identify visually with each career.
Dani Moore
308 reviews2 followers
May 25, 2013
This fun little book combines illustration, photographs and rhyme into a "what do you want to be when you grow up?" book. Simple, good for early school age or some preschoolers. I think my 4 year old Granddaughter would really enjoy it.
Maurice David
19 reviews2 followers
December 30, 2012
Great book for bedtime and for children who are learning how to read. Some fun rhyming also included helping kids discover different professions.
Doreen
15 reviews2 followers
July 10, 2017
If You See a Doctor is not worth it

This was the worst thing I have ever bought . Don't waste your time or money. It's not worth it . It's like five pages with the sentence on each page .
Grampy
871 reviews49 followers
February 9, 2013
This book was Reviewed by Lee Ashford for Readers' Favorite.

"If You See a Doctor" by David Chuka, is a valiant effort to expose kids to a variety of potential careers. As it is intended for pre-school aged children, it is obviously not an intensive dissertation on various potential careers. Rather, it simply names a career, then follows that by naming one basic thing that particular career may do. It may even give kids a quick response to that universal question: "What do you want to be when you grow up?"

As with Chuka's other works, the illustrations consist of an even pairing of drawings and photographs. My one concern is some inconsistency in the rhyming convention. Some paired lines end in similar words that do not rhyme. Examples include pairing "Diver" with "River", "Doctor" with "Sore", and "Waiter" with "Platter". In other cases, instead of trying to make two consecutive lines rhyme, the second line in a pair rhymes with the second line in the next or previous pair. This may confuse young children. Or, they may not even notice.

The manner in which this book introduces pre-schoolers to various careers follows a familiar format. Above a drawing of a doctor will be the line: "If you see a Doctor". On the following page will be a photograph of a doctor, with the line: "Tell him where it feels sore" and so on. Not only does this introduce a career, it also helps children learn that the drawing and the photograph represent the same thing. This book is not going to finalize your pre-schooler's future career selection, but it will help him/her to recognize that there are many, many things they can become when they grow up. It is important for kids to realize they have the potential to be whatever they want to be, if they are willing to work for it.
Nancy Silk
Author 5 books70 followers
July 2, 2013
A Really Cute Children's Book

This simply presented children's book, suitable for very, very young children, is ideal. The artwork and pictures are fun and present positive ideals to children. It's a book that a child will want to see and hear you read over and over again. It is very refreshing.
Jessica Peterson
Author 32 books17 followers
July 27, 2013
I liked the pictures and the fact that each profession was well illustrated, however I felt like I was set up expecting rhymes. Therefore, I found myself stopping when something didn't rhyme.
Displaying 1 - 8 of 8 reviews