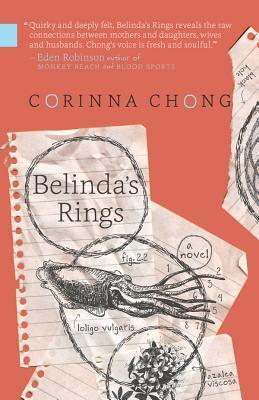 3.68
47 ratings9 reviews
Rate this book
Half-Asian teenager Grace (but she’d prefer it if you called her “Gray” instead) is dead set on becoming a marine biologist rather than being anything like her mother, Belinda. She’d leave that role to her sister Jess instead, who’s a supermom-in-the-making.

Belinda herself is somewhat obsessed as well, by crop circle books and imagery, and abruptly runs out on her family, flying across the Atlantic in order to study the real thing in the English countryside. Grace and her sister are left alone to take care of the house, their rapidly-deteriorating stepfather, and their peculiar little brother, Squid.

Belinda’s Rings weaves together the coming-of-age of a young biracial woman with the mid-life crisis of her mother. With warmth, kindness and a boisterous sense of humour reminiscent of Miriam Toews' A Complicated Kindness and Peter Hedges' What's Eating Gilbert Grape?, author Corinna Chong introduces us to two loveable and thoroughly original female protagonists: persnickety, precocious Grace, and her impractical, impulsive mother, Belinda—-very different women who nevertheless persistently circle back into each other’s hearts.

3 books13 followers
I am a writer and avid reader based in Kelowna, BC. My first novel, Belinda's Rings, was published in March of 2013. Visit my website here.

Kat Duncombe
31 reviews
May 31, 2013
Belinda's Rings was really easy to get into and hard to put down. I especially liked the voice of Gray and Belinda's obsession with crop circles. However, it was hard to like any of the characters. I liked Gray some of the time, but she and the other characters were so selfish and dysfunctional, that sometimes I thought "What is wrong with these people!?" I especially didn't like Jess. The fact that the characters were so flawed, however, makes the book very realistic.

There were times when I simply had to keep reading, because the chapter before had great tension. Chong is a great author, and I'd definitely pick up another book of hers.
Sarah
1 review1 follower
May 26, 2013
This book made me laugh, cry and wince in embarrassment. Very powerful imagery!

Also, as someone who grew up in Calgary during this time period... so many funny memories surfaced. Oh how I hated "Mad Minute" tests in math class... haha.
B. Mantler
Author 30 books11 followers
December 31, 2017
I kept waiting for something to happen and nothing did. The ending seemed more like the author wasn't sure how to continue it than having a climax. I wanted to like it, but this is not my kind of book as I prefer action and plot in the stories I read.
Kendra
324 reviews21 followers
August 8, 2013
For a complete rendition please go to:

I was skeptical to read this. Not based on what it was about. I actually probably would have been drawn to it based on the cover alone. I was skeptical because first off I never even heard about it until my mom started ranting and raving about it. And why she was raving about it? My childhood friends sister (who used to live on the same street) wrote it. You know what that means? I actually know a published author! I mean, thats pretty cool. (and yes I use the term very loosely) Secondly, I felt like I had this huge obligation to like it based on the fact that I 'know' the author. So when it came time to read it for book club I was hesitant but still excited, I mean look at that cover!

Now that that is out of the way. What did I think? I liked it. It wasn't the best book I've read this yer but for a first time novel. Corrina did a fantastic job. Her writing style is the type I like, being that she writes how she would talk. It is very believable and you get an understanding of what life is like for Gray.

The novel focuses on Gray. She is a typical intorvert Calgarian teenager. Gray is trying to fit in at school, help raise her step-brother Squid, and trying to get along with her older sister who thinks she is the second coming.

Side note: this book is based in Calgary, and being a Calgarian/Canadian I understood a lot of the geography and terms (LRT for example). I can see that if you aren't from around here you may get lost in it and push aside a lot of the descriptions. Side Side Note: I loved the Len T. Wong part. Len T. Wong is a real estate person, and his adds are everywhere. I also have countless times seen this graffiti.

The other part of the story is focused on Belinda. The mother. She decided to take a break from her family and travel to England (her mother land) to study crop circles. While some may see this as selfish, I think its great. Just because you have kids doesn't mean that you should give up on your hobbies and interest. Yes she failed big time in the fact that she left them without much guidance or knowing how long she would be gone for.

Belinda's Ring is a great first novel for Corrina. I do recommend it. Its not a newfound plot nor does it have a huge climatic ending, but it was honest.

Page 24-25
I try not to look in the mirror too much, because I feel like I never see what I actually look like. I see what my brain thinks I look like, but it's different than what I actually look like. You know when you see yourself on video or in a picture and you think, Ew, is that really what I look like? I sometimes use Mum's bathroom mirror because it has two panels on the side that are medicine cabinets, and if you open the panels so that they sort of face each other, you can see yourself from a whole bunch of different angles. And if you face the panels in just the right way, you can reflect your reflection, so that what you're seeing isn't backwards anymore, but the way that people looking at you see you. It come in handy when I'm not sure if my hair looks funny. It might look great from straight on, but then when I see it from the reflection of the reflection, I realize it's totally lopsided. Or there could be a lumpy patch at the back. The first time I figured out how I could look at my hair from the back, I noticed that I seriously needed to dye my hair again, because the bun at the back looked like an orange flower stuck onto the dark brown parts smoothed against my scalp. I couldn't believe I'd been walking around like that.

Grace is a teenage young woman who is set in becoming a marine biologist - the complete opposite of her mother. But she is perpetually stuck in making sure the household runs properly while her mother, Belinda, takes an unexpected trip to Britain.

my complete review on my blog

Sydney
83 reviews
February 22, 2014
Belinda’s Rings was a great read with a lot of heart. I really enjoyed it from beginning to end, particularly Gray’s voice – honest and gregarious and earnest. I loved the wordy chaos of it. As Gray delves further and further into the problems of her family, and of her mother’s own selfishness (although simultaneous selflessness for committing herself to house-wife drudgery), we discover the fragility of family. And the wonders that any of it can work out.

What do I take away from Belinda’s Rings? I am someone who likes to believe I am completely independent, but novels like this one remind me that our lives are always linked with the actions of others. Gray’s obsession with marine life, in particular the squid (also the nickname of her younger brother), isn’t so different from Belinda’s obsession with crop circles. The connections of these independent women in this family and their desire to be free to pursue their interests ultimately complicate the lives of their family members. The culture that I see myself surrounded by does so much to elevate independence as a characteristic of women – the independent woman, not the “clingy girlfriend’ is the woman most 21st century men want to be with, but yet she is still a woman that society craves to tie down. What happens when that woman is tied down? What happens when she believes she can be the wife or sister everyone wants her to be? And what happens when she realizes she isn’t? Where or with whom then does the failure lie?

Tan
295 reviews8 followers
March 25, 2013
This was a great little novel. Told from the points of view of Gray and her mother Belinda, who has just left her family in Canada to research crop circles. No one, not even Belinda, knows whether she intends to return. While I wouldn't say this is a "YA" novel, Gray is only 17, and her mother has some growing up to do as well, so this will definitely appeal to readers who like contemp YA stories.

Reminded me a bit of Magnified World, and The Indigo Notebook.

Alexis
Author 6 books129 followers
May 14, 2013
I really enjoyed this book by first time novelist Corinna Chong. I liked the voices of the two main characters; one of whom was Eurasian. I also thought the relationship between mother/daughter was well described and liked the reoccurring images of crop circles and marine life. I'm going to write a column about this book.