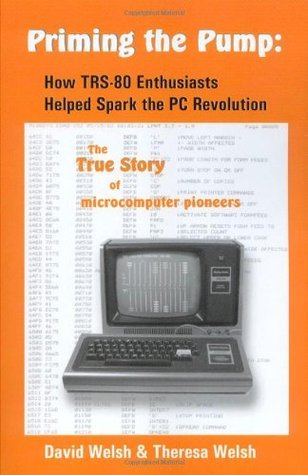 3.51
51 ratings5 reviews
Rate this book
Priming the Pump: How TRS-80 Microcomputer Enthusiasts Helped Spark the PC Revolution by David Welsh and Theresa Welsh takes you back to the largely unknown origins of personal computing. Personal computers grew out of a hobbyist movement in the 1970s, as some began experimenting with the new microchips, building their own computers. Kit computers appeared, available from small mail order companies, but the computer that brought a wider audience to personal computing was the TRS-80 Model I, introduced by Tandy Corporation in August 1977. It was the first complete mass market, off-the-shelf microcomputer that anyone could buy for $599.95. And it was available at 3500 Radio Shack stores nationwide.

Introduction of the TRS-80 meant, for the first time, anyone could experiment with software and affordably use word processing, spreadsheets, accounting, database and other applications... except for one thing: there weren't any programs. So, of necessity, new computer owners became programmers, and enterprising individuals working in basements and garages created the software everyone wanted. Many of them had never done any programming before.

The authors were part of a community of entrepreneurs who sold software for the TRS-80. Besides telling their own story, they also collected stories from key innovators from that era, including some who had never been interviewed before about their contributions to computing. The technology that originated with these amazing microcomputer pioneers went on to change life in fundamental ways and their stories are the heart of this book.There were programmers who created fabulous games like Dancing Demon, Microchess, Oregon Trail and the Scott Adams Adventures; there were rivals who created five different Disk Operating Systems for the TRS-80 and one man's fight with Tandy over who owned the code; there were scam artists who offered products that were too good to be true, and brilliant visionaries who were first with software features later "invented" by big companies with more money but not more talent.

The authors relate how Don French, a computer hobbyist who worked for Radio Shack at the time, suggested to his bosses that they capitalize on the latest craze, home-built computers. Radio Shack took a chance and hired young Steve Leininger away from Silicon Valley and told him to build a machine they could sell cheap. Working alone in an old saddle factory in Fort Worth, he built the first TRS-80; its total development costs were less than $150,000.

Author David Welsh was one of those self-taught computer-buyer/programmers. He created a word processor, Lazy Writer, and, working with his wife Theresa, sold copies worldwide to enthusiastic fans who were eager to ditch their typewriters. This was before Microsoft was a household word, when software was new and exciting and everyone was learning. Software generally had only one author, and programmers were proud of their work; some became stars. David and Thesesa Welsh, who lived through it all, have captured the defining moments and excitement of this era, with the untold stories from the microcomputer pioneers whose efforts and love for their "trash-80" helped spark the PC revolution that followed.

It’s useful to remember that there was a time when it was all new and wonderful.

This is not a book about a bunch of cool events tied together to form a history—though it certainly has its cool anecdotes. Priming the Pump is about the gestalt of its time, a time when programmers were designers, and writers and artists moved into programming as equals. When people selling software out of their trunk weren’t selling knock-offs, they were selling their own original programming. And a time when the powers-that-be didn’t recognize what was happening.

If you are interested in the history of personal computing, you have to read this. It made me drag out some of my old 80-Micros just to take a look at some of those old ads and BASIC listings.

John Sheppard
10 reviews
August 17, 2016
Fantastic read simply because it brought me back to a time ... a time seemingly filled with wonder … a time when the WORLD was changing and I was part of it and knew it! Something that is still ongoing and daily makes me overly glad to be here!!!

If you were there having fun with a Trash 80 then read this book! You will love it.

Mark Eichin
30 reviews3 followers
May 10, 2013
This book was written for me and my high-school "computer friends", who grew up on the TRS-80 computers; the authors dug up (or simply *remembered*) a great wealth of industry gossip about what was, in the end, a groundbreaking dead-end of computing. If you actually had a model I/III/4/4p, subscribed to 80 micro, and knew what LDOS was (even if you didn't get to actually *buy* it) then this book is aimed at you, pretty directly - and really, noone else. I don't actually think it will be of interest to anyone with a later entry to computing; we're talking about a period when "proportional spacing" was a *heavily bragged about feature* in a word processor - running on hardware that couldn't actually display lower case letters. (To be fair, the authors do get across some of these ideas in modern terms; it's just that if you don't have the touchstone of experience with that era, you can wonder, not unreasonably, why we even bothered :-)

(In particular, Bruce B and Jon L may find this book interesting. I don't think I'd recommend it to *anyone* else - it's well done for what it is, but it's *very* narrow.)

If you still think you might want to read about this period as an outsider - watch https://www.youtube.com/watch?v=Prl6D... instead - @eevblog's Model 100 teardown, where he just *adores* the extent to which such a useful and novel machine is built with actual *chips* and not custom parts. That's going to be more satisfying anyway...

Eric
19 reviews
February 21, 2009
It was a decent book, but it was more about the Model I/III computers. I had a TRS-80 Color Computer, so there wasn't as much stuff of interest too me. It was an interesting computer history read.
John
5 reviews
September 4, 2015
Great read--if you fondly remember hacking away on TRS-80s.
Displaying 1 - 5 of 5 reviews