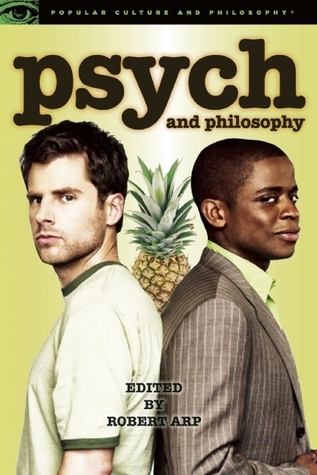 Psych and Philosophy: Some Dark Juju-Magumbo

3.89
38 ratings3 reviews
Rate this book
“I’m getting something,” says Shawn, assuming a look of intense concentration and pressing his fingertips to the sides of his head. Shawn Spencer uses lies, pretense, and distraction to get at the truth. But can pseudoscience and fakery really be so helpful? And if they can be, is it ethical to employ them?
Psych and Philosophy takes an entertaining tour through the philosophical issues raised by a fake psychic. Can faulty logic get to the truth quicker than good logic? Are other people to blame for Shawn’s deceptions, because they’re more ready to credit him with supernatural powers than with superior natural powers? Is instinct more important than smart thinking—in police work and in life? Is it ethical to tell lies to promote the truth (and protect the public from criminals)?
Almost every episode of Psych revolves around a grisly death, treated humorously by the repartee between Shawn and Gus. The show has much to tell us about human ways of coping with death, as well as about the problem of justified knowledge, the ethics of law enforcement, and the interaction of love, friendship, loyalty, and professionalism.

64 books14 followers
Robert Arp, Ph.D. (Saint Louis University, 2005), has taught Philosophy at Southwest Minnesota State University, Florida State University, and many schools in Missouri, before doing postdoctoral research in ontology through the National Center for Biomedical Ontology with Mark Musen and Barry Smith at the University at Buffalo.

3.89
38 ratings3 reviews
5 stars
11 (28%)
4 stars
13 (34%)
3 stars
13 (34%)
2 stars
1 (2%)
1 star
0 (0%)
Displaying 1 - 3 of 3 reviews
elle buss
351 reviews66 followers
March 3, 2018
as possibly the biggest psych fan to grace the planet, i HAD to read this, and it was FASCINATING. it took such a deep dive into the motivations and feelings of the characters and explaining the philosophy behind it all. my only problems were that it got a little off-topic at times and since it was written by multiple authors, a lot of the information was repeated (seriously, i think i was retold the premise of the pilot at least twelve times.) but i would recommend this to any hardcore psych fans!!!

Skyler
12 reviews
July 10, 2013
This book is a fascinating and exhilarating combination of humor and wit on par with Shawn and Gus's antics in every episode of Psych as well as mind-bending and enlightening philosophical discussions. If you like Psych, or if you enjoy philosophy in general, then you will both love and be astounded by this book.

Michael
Author 2 books2 followers
July 30, 2015
I highly recommend this book...not because I wrote a chapter in it (Chapter 2: "What's the Story"), but because it provides unique insights into some of the more fascinating subjects within philosophy through the context of an amazing TV show.
Displaying 1 - 3 of 3 reviews