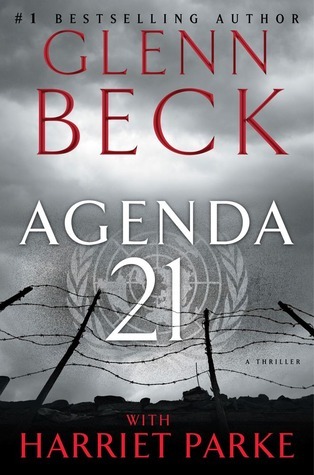 3.84
7,460 ratings1,032 reviews
Rate this book
“I was just a baby when we were relocated and I don’t remember much. Everybody has that black hole at the beginning of their life. That time you can’t remember. Your first step. Your first taste of table food. My real memories begin in our assigned living area in Compound 14.”

Just a generation ago, this place was called America. Now, after the worldwide implementation of a UN-led program called Agenda 21, it’s simply known as “the Republic.” There is no president. No Congress. No Supreme Court. No freedom.

There are only the Authorities.

Citizens have two primary goals in the new Republic: to create clean energy and to create new human life. Those who cannot do either are of no use to society. This bleak and barren existence is all that eighteen-year-old Emmeline has ever known. She dutifully walks her energy board daily and accepts all male pairings assigned to her by the Authorities. Like most citizens, she keeps her head down and her eyes closed.

Until the day they come for her mother.

“You save what you think you’re going to lose.”

Woken up to the harsh reality of her life and her family’s future inside the Republic, Emmeline begins to search for the truth. Why are all citizens confined to ubiquitous concrete living spaces? Why are Compounds guarded by Gatekeepers who track all movements? Why are food, water and energy rationed so strictly? And, most important, why are babies taken from their mothers at birth? As Emmeline begins to understand the true objectives of Agenda 21 she realizes that she is up against far more than she ever thought. With the Authorities closing in, and nowhere to run, Emmeline embarks on an audacious plan to save her family and expose the Republic—but is she already too late?

53 books958 followers
Glenn Edward Lee Beck is one of America's leading radio and television personalities. His quick wit, candid opinions and engaging personality have made The Glenn Beck Program the third highest rated radio program in America and Glenn Beck, one of the most successful new shows on the Fox News Channel. His unique blend of modern-day storytelling and insightful views on current events allowed him to achieve the extraordinary feat of having #1 New York Times bestsellers in both fiction and non-fiction. Beck also stars in a live stage show and is the publisher of Fusion magazine.

Online, he is the editor of GlennBeck.com and the publisher of TheBlaze.com.

Beck is the author of six consecutive #1 New York Times Bestsellers including his latest book, the thriller The Overton Window. When The Christmas Sweater, his first novel, debuted at #1 on the fiction list, Beck became one of a handful of authors to write books that reached #1 on both the fiction and non-fiction NYT lists.