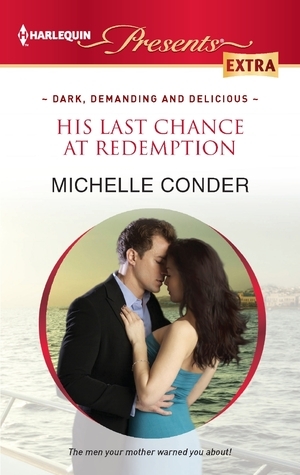 His Last Chance at Redemption

3.54
167 ratings18 reviews
Rate this book
His final undoing…Leo Aleksandrov is used to being obeyed—a perk of his coldhearted ruthlessness. Having to explain to an enticingly pure day-care owner exactly why he's never met his own son? Not how he likes to operate. There are some secrets so dark they should never be told….

Employing Lexi Somers as a stand-in nanny pushes this merciless tycoon to the edge. Her warm innocence could never even start to atone for the sins of his past, but if giving in to temptation is inevitable, blazing pleasure is the only thing he'll allow himself to feel in her arms….

142 books81 followers
After graduating from the University of Melbourne, Michelle Conder took a variety of jobs before packing her bags and traveling and working overseas. When none of the career opportunities she encountered grabbed her she returned to Australia and after more study decided to follow her lifelong dream of becoming a writer.

Michelle now lives in Melbourne with her husband and three children and when she isn’t writing loves to visit faraway places and spend time with her family and friends.

Heroine is a London day care owner. Hero is a Russian Gazillionaire who doesn't do love or emotions of any kind. The story opens with the hero being bored by his booty call date and then getting a frantic call that his baby mama has left their child at the day care and isn't coming back.

Hero has never met his three year-old son, but nevertheless he shows up to take him to his flat. Heroine's thoughts of sexual inadequacy are interrupted by the unauthorized hero trying to take his son away. (This was beyond boring - if I wanted to read about entitled people breaking rules and self-righteous people enforcing rules - I could just hang out at the customer service desk at WallMart.)

The upshot of all of this, is that the hero convinces the heroine to come to his flat with him since his son knows her. After a tedious argument, the heroine agrees and then once there, proceeds to give lots of unsolicited advice, wakes the hero up from a nightmare, and tries to probe his every thought.

The hero has business in Greece, so he takes the heroine and his son along. They stay on the hero's yacht. There are a bunch of other guests and one who put the moves on the heroine. The hero is jealous and distracted at his meetings. He sees the heroine without a life jacket riding a jet ski with the OM. (Who would ride a jet ski without a life jacket?) She falls off, but the hero rescues her. From then on the heroine has a great time considering she's supposed to be watching the hero's son. Some other flunky gets roped into the actual babysitting.

The H/h eventually have the best sex ever. The hero leaves the next morning before the heroine awakes. Heroine is angry at this treatment, and the hero wants sex again, so he sets out to woo her. Heroine's idea of romance is to conduct an interrogation/psychological profile. From her really annoying questions we learn the hero's sad backstory and why he's standoffish with his son.

This story was about the hero's childhood interspersed with either sexy thoughts or sexy times. It was a little jarring, to say the least. The heroine's hang ups after being rejected by her first boyfriend were easily dismissed and seemed ludicrous in the light of all the inner monologues by the hero at how gorgeous she was and how sensual, etc. . . The hero's son barely got any page time even though he was the catalyst to their romance.

I can only take so much of these kind of wounded alphas. Yes, it's right in the title so I should have known better. The heroine was an alpha whisperer and a toddler whisperer - in the end they did what ever she told them. Now that's a fantasy right there.

Booklover
646 reviews1 follower
August 7, 2012
This was an okay read for me.I completely understand that H was trapped by this model who used a tampered condom,so completely understand not giving in with wedding ring and name but not being there for your child & H never acknowledged the existence of his child for 3 years that i cannot forgive.Yes H was trapped but what was the child's fault in all this:(

The model and H both are worse parents,the model she is not even eligible to be called a woman using a child to trap a man and then when her purpose was not fruitful she did not even take care of the child properly and the way H ignored his own child so he is also same as that model.Both for their own selfish reasons ignored their child:(Least H later on almost at the end does develops feelings for his child and gets his sense back.

The reason that was given for his abandonment of his child-it is not good enough for me,IMO no matter what nothing can justify "Never acknowledging and ignoring your child".

This entire review has been hidden because of spoilers.

Dalia
357 reviews58 followers
January 30, 2013
I enjoyed reading Michelle Conder's second book. I like her writing style, how she builds the tension. I like the back and forth between Leo and Lexi, the witty banter sprinkled with humour. And I like the characters development.
Leo is a fascinating hero. He has a dark past and loads of secrets. He lives with an ever present guilt and shuts himself down emotionally. For fear of being like his abusive father, he refuses to have anything to do with his son Ty - a son conceived on purpose by a one-night stand gold digger - opting only for financial support. But when the mother abandons Ty, Leo reluctantly steps in to take care of the 3 y son he has never seen.
Lexi is the manager of the childcare center Ty attends, and saying she is not very impressed by Leo is an understatement. Needless to say that the chemistry between them sizzles from the first fiery encounter and gets hotter the more they spend time together.
Lexi is a lovable heroine. she is sweet yet strong. She challenges Leo all the way and makes this man “ who had turned short term relationships into an art form” yearn for more. Maybe she is the "angel" who will unravel Leo's secrets and help him find his redemption.
Tia
Author 6 books129 followers
July 23, 2012
Way better than the newer ones I've read today. I like that the hero was such a stick in the mud because it was beautiful watching him change for the heroine. The heroine was such a rich and funny blend, she was the exact opposite of the hero and it made the story work really well. Especially her sass.
Jen - Reviews
323 reviews22 followers
September 17, 2012
Well, this is Michelle Conder's second book and it is fabulous. Really great characters, great storyline, really enjoyable.
Lexi, the heroine is simply wonderful. Leo the hero, is a hunk of a man with many secrets. Slowly, Lexi unravels them one by one.
The chemistry between H/h is great and the lovin' is even better !! Five stars for me!
Tracey
Author 5 books34 followers
September 15, 2012
Wow! If you like a sexy ruthless Russian hero, then this is for you. A fantastic read from Michelle Conder.
Leo and Lexi have to battle their pasts and the sizzling tension between them before they can even think about the future. And Leo doesn't do future. Can Lexi tame the bad boy Russian?
Loved finding out.
Kace | The Booknerd
1,238 reviews56 followers
May 6, 2017

Enjoyed this book so much!

Leo Aleksandrov is used to being obeyed—a perk of his coldhearted ruthlessness. Having to explain to an enticingly pure day-care owner exactly why he's never met his own son? Not how he likes to operate. There are some secrets so dark they should never be told….

Employing Lexi Somers as a stand-in nanny pushes this merciless tycoon to the edge. Her warm innocence could never even start to atone for the sins of his past, but if giving in to temptation is inevitable, blazing pleasure is the only thing he'll allow himself to feel in her arms…

Yazmin
523 reviews15 followers
December 12, 2012
His Last Chance At Redemption by Michelle Conder is a very passionate and emotional story.

Lexi Somers is the co-owner of the day-care center where Ty Weston has been taken care of since he was 1 year old. She has a big connection to Ty, even though she knows that she should not have favorites in the center.

Leo Aleksandrov is used to always getting his way in everything.Read More...
Toni Davids
52 reviews
August 6, 2013
I wanted to like this one more but the hero was a struggle for me. Michelle Conders writing style saved it from being difficult to finish, she has an extremely engaging way of telling a story. She's certainly one of my favourite Presents voices so I hope the next one clicks a little better for me. On the whole this was a decent read though and readers should not be swayed by my personal tastes.
Diah Didi
688 reviews138 followers
September 25, 2012
I actually really loved the story, and the hero. But there were some points I got annoyed by the heroine. Aaaargh...
3.5 stars.
Harlequin Books
16.3k reviews2,774 followers
Read
December 27, 2014
Miniseries: Dark, Demanding and Delicious
Category: Classic Romance

Gege86
142 reviews3 followers
January 28, 2013
I didn't loved this one so much, the writing style was perfect for a new author, and it was done perfectly, but all in all was an ok novel.
Alison
654 reviews
October 14, 2013
I do love Russian heroes and this was no exception. Really enjoyable and satisfying read.
Kay
199 reviews
April 13, 2013
Brilliant