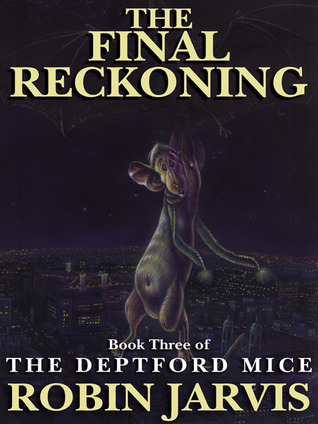 4.11
1,158 ratings27 reviews
Rate this book
The ghostly spirit of Jupiter has returned, more terrifying than before. Bent on revenge, he smothers the world in an eternal winter of snow and ice. The Deptford Mice are worried: the mystical bats have fled from the attic, and a new rat army is gathering strength. With food short and no sign of spring, the mice know there's a desperate struggle ahead. Who knows how many will survive and at what cost?

You may remember that one of my favourite things about Robin Jarvis’ writing is that he isn’t afraid to be dark even though he is writing for a younger age group, and this book was no exception. Often in children’s fiction, the forces of evil (whatever form they may take) are distant, incompetent or impotent or a combination of all three. Evil is usually active in a far off land to which the protagonist must journey to fight it, its plans fail fairly easily before they can be put into practice, and if a character is important and liked then Evil will frequently content itself with capturing rather than killing them. All in all, Evil often isn’t terribly threatening. However, the forces of evil in Jarvis’ books are immediate, powerful, bloodthirsty and indiscriminate in who they attack. Just because a character has a name and has been well developed does not mean that they are safe. I love that I can read a book for younger readers entitled The Final Reckoning with a final chapter also called ‘The Final Reckoning’ and do so with apprehension because I don’t know which, if any, of the characters will make it through to the end alive. There is real tension and anxiety in these books which I’ve not often found in children’s fantasy. Of course, this might be far more common in children’s literature now, I don’t know, but I still think Jarvis should be applauded for what he has done, particularly considering The Deptford Mice Trilogy is more than twenty years old.

Qt
501 reviews
December 27, 2008
Dark and violent, this was a fitting end to the trilogy. A few things seemed like they needed more explaining, but I guess that's why there is a prequel trilogy!

Jeremy
81 reviews
May 31, 2020
Dark yet exciting and delightful. This series was highly original. May be written simply enough for children, but it has plenty of adult level disaster, death, and gore. If you like animal fantasies, then this series will please. (Book one is the slowest, with events in book two really getting interesting.)
Sharon
174 reviews17 followers
November 28, 2014
The third and final book of the trilogy and the most scary and gory of them all I think. The thing about Jarvis is he is not afraid to kill off any of the characters - something fairly unique to children's writing - so you really don't know what is going to happen and who is going to survive. It will be up to individual parents if they think it is suitable for their child but I give the whole series four stars for story telling and vivid character and scene setting. They lost the last star just because I am on the fence as to whether they are a little violent and scary for their target audience. Don't be put off as an adult though, these really are fun reads - and perhaps read them before your child to see if you think they are suitable as I can assure you, you will enjoy them if nothing else.
Joanne
138 reviews
May 13, 2020
I can't help but give it five stars. This book (the whole series!) was a childhood favourite and is probably responsible for how my tastes developed into adulthood.

But - and I can't stress this enough - I had forgotten just how much Robin Jarvis wanted to hurt these mice! This isn't your usual kids story, it's violent and cruel and downright graphic (for a kids book).

Vivian
299 reviews1 follower
April 22, 2019
I am glad I took the time to finish this series. The trilogy was exciting, surprisingly violent, and gave me characters I could root for. But this last book felt a bit tired and thrown together, using played out villains from the earlier books and trying to pass them off as fantastic, god-like creatures. Some of the loose ends were tied up but not as neatly as could be hoped for, such as the Star Wife, Jupiter’s finale, the whole bat society thing. The first book was the best. The second book too stereotypical religious mania-flavored. And this third installment was the weak link.
Ty
103 reviews4 followers
July 28, 2022
This ending really fizzled out. I just didn't buy the stakes, nor did I care. They upped the stakes, but if the fate of the world really is at risk because of some sinister cat spirit, at least show me how all of the actions are impacting humanity and not just the mice who are standing close by. There is a deeper mythology that is teased at that I would have liked to see fully realized. Maybe he dives into this in his Deptford Histories trilogy? I may visit that in the future.
Adrianne Rosal
1,007 reviews9 followers
November 15, 2019
The final story in this trilogy and Im sad to see it end. All three books were amazing!
Daisy May Johnson
Author 2 books164 followers
April 15, 2022
Review : here.
(Spoiler: I cried).
(Spoiler: I LOVED IT).

Mary
239 reviews9 followers
November 25, 2022
4.5 stars ⭐️
This was a great ending to the trilogy, action packed from the beginning and kept up right to the last few pages. Really want to read the prequel books, this is a great world.
Kate
61 reviews1 follower
September 16, 2017
Ahh, my heart! A brilliant but tragic end to the series. Can't wait to move onto the prequels.

Edda
172 reviews15 followers
January 22, 2014
I had my reservations about reading this series because it's been a while since I read books with animal protagonists. But these characters are so interesting and likeable (or hateful) that you forget they're little mice and rats (and squirrels and bats too). It's really a great story about good vs. evil, friendship, loyalty, and hope (sound familiar? HP, anyone?). I highly recommend it if you enjoy fantasy with a dark and supernatural twist.
Logan Mcguire
8 reviews1 follower
May 28, 2014
What a perfect ending to a wonderful trilogy. This book is probably the best book in this series as it sends all the other books out of the park. One bad thing about the book though is that so many wonderful characters had to die off, but I guess it makes a bit of sense considering that the end of the world is pretty much happening. An endless winter is some way to end it all, and it definitely puts everyone in danger. Great. Loved it. Deserves five stars. You should read. It's wonderful.
Matthew Hodge
593 reviews21 followers
June 21, 2020
Well, that was just the mother of all finales. Villains come back from the dead, half our favourite characters are killed off, you get halfway through and have no idea how everything is going to sort itself out.

In short, it's Robin Jarvis at the top of his game and it's awesome. Don't read this unless you've read the first two because the long arc of the three books is brilliant. Still remains one of my favourite YA series of all times.

Jailynn
148 reviews8 followers
January 22, 2009
Not your cute, sweet Engilsh country forest creatures story. A more violent and grusome Rats of Nimh type book. No happy ending really but a realistic one, (that is if mice and rats and cats could talk to each other and form a real society and communities plus magic, yep, that's how it would be) Fun but dark book for pre-teens and up.
Dayna Smith
2,853 reviews9 followers
September 13, 2016
The final book in The Deptford Mice trilogy. The evil spirit of Jupiter has returned to encase the world in eternal winter. The Deptford mice feel his hatred. Then their allies are murdered, the bats flee, and the Starglass is stolen. Can Arthur, Audrey, Piccadilly, and Oswald save the world? Will any of them survive? A sad ending, but no battle against evil is won without cost. A great series!

Ariel
174 reviews1 follower
June 6, 2016
It was definitaly an ending book. Characters kept dropping like flies. It did go back to the way the first book was written with the various storylines, and that's probably why it was better, because the whole series should be like that, making for a better adventure.
Tim Jones
51 reviews1 follower
February 5, 2008
The concluding story of the Deptford Mice and their dealings with Jupiter.
Virginia
48 reviews
June 9, 2008
Conclusion was very well written - for the first time in this series had had several plot lines going at once which I thought added nicely to the adventure and plot anticipation.
Donna
524 reviews53 followers
December 9, 2008
A really fitting conclusion to the Deptford Mice trilogy. These books were really enjoyable.

Desu Chan
4 reviews
Read
January 21, 2011
I find this book boring...but i still don't know why I choose it. :P
harrie kd
89 reviews1 follower
April 8, 2011
ust got reminded of these by the fact they're doing a live version at wimbledon theatre. it was one of my favourites as a kid, i read all these deptford mice books multiple times. great stuff!
Nakena
16 reviews
October 20, 2011
I think the author was running out of ideas at this point. Final book in the trilogy was rushed and not that entertaining really. I really enjoyed the first two though.
Edward Davies
Author 3 books35 followers
June 19, 2015
The conclusion to this series sees things getting even darker, and those characters we've grown to love may not be safe from the writer's knife! A fantastic end to a fantastic series.