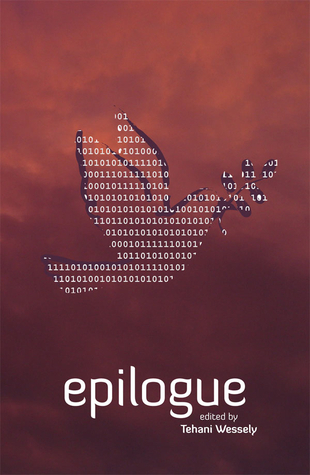 4.41
17 ratings9 reviews
Rate this book
ep·i·logue: an ending that serves as a comment on or conclusion to what has happened.

Climate change, natural disaster, war and disease threaten to destroy all we know. Predictions of the future are bleak. But does the apocalypse really mean the end of the world? Is there no hope for a future that follows?

Twelve writers take on the end of the world and go beyond, to what comes next.

Easy to visualise, so much world building and backstory with a few paragraphs, and then so much to think of for their future. Easily one of the best short stories I've ever read.

While interesting, I would have liked a little more detail - I didn't know what a lot of the things involved where, and it left me a little confused at times. Felt like this was a short taken from a larger piece of work?

Took a little time for me to get my head around it. Probably damn good, but just not my type of short. Or it could be that as I'm ill, I'm just a little too slow at the moment to fully appreciate.

Beautiful and emotive. A lovely journey that was set up well, and followed through wonderfully. I would love to see more in this world.

interesting and thoughtful, a quite enjoyable short with a strong ending. Two errors on page 88 (line 15 and 25) where there's a space between the " and first word of dialogue.

Captivating and sweetly ending, another short that poses an interesting glimpse into a dystopian world where I would be interested in reading more.

One of the creepiest so far. I was a little confused as to what the monsters exactly were, but in this, it wasn't really necessary to know, exactly.

Sadly there's generally one I just can't get into.

It starts off a little slow, lulling you almost into a false sense of security that it’ll be a short story of travelling and hardship but ultimately finding strength through everything – but no. The story continues into so much more.

Very Australian, decent and realistic, a journey that could almost happen now, let alone then.


‘Only the Books Survive’ by Tansy Rayner Roberts - Four stars.

It's always good to see books being important, and classics dependable and loved. This would be a very interesting novella.

A strong ending that was easy to visualise, and a little bit creepy.
This entire review has been hidden because of spoilers.

Guy Salvidge
Author 14 books35 followers
June 24, 2012
Epilogue is the latest offering from Fablecroft Publishing, an Australian small speculative fiction press that specialises in themed spec fic anthologies. For this volume, editor Tehani Wessely has chosen a strong cast of notable Australian writers as well as one stray Swede, Kaia Landelius. Originally titled “Apocalypse Hope”, Epilogue asks ‘what happens after the apocalypse?’ Many of the stories herein have an optimistic bent to uplift us from the all-too-dystopian world we live in. Epilogue is professionally presented and features commanding cover art from Amanda Rainey, whose work adorns plenty of Australian spec fic covers these days. With Epilogue, Fablecroft firmly establishes itself alongside Twelfth Planet Press and Ticonderoga Publications at the forefront of Australian speculative fiction publishing.

Thoraiya Dyer’s “Sleeping Beauty” opens proceedings, and it features an apocalypse in progress that our voracious protagonist can survive but not prevent. Rather enigmatic in style, Dyer’s brief tale is nevertheless atmospheric and exceedingly well written. Jo Anderton’s ”A Memory Trapped in Light” is rather different but equally impressive in an entirely different way. Isola and Ruby are sisters living in a nightmare future of Legate Drones, Pionic Flares, Shards, imprisoned children, ancient laser cannons and the Crust. Channelling SF films like The Matrix and Spielberg’s War of the Worlds, as well as the classic SF stories that underpin those works, Anderton has constructed an exuberant and positively traditional SF story with strong female central characters, something that rarely featured in the Golden Age imagination. There’s a paucity of genuine science fiction in the Australian spec fic scene currently, but the work of Jo Anderton would appear to be a significant exception.

Lyn Battersby’s “Time and Tide” is an elegant and endearing time travel narrative featuring three characters: a woman, Pauline; her teenage son, Sean; and the mysterious Michael. In a series of brief snapshots, we follow Pauline across different realities and varied occupations. In one she is a prostitute and in another a nun, but in the main narrative she’s a scientist. Something has gone wrong with time, of course, and setting things straight proves rather troublesome. “The Fletcher Test” by Dirk Flinthart pits computer whiz Anneke against a computer virus named Kali. Most of the story is a series of conversations between the simulacra and its would-be executioner, and things spin in an unexpected direction at the end.

Stephanie Gunn’s “Ghosts” is another impressive offering in a now-rarely seen SF subgenre: life in an underground shelter after the bomb. Nadya and Mater are teenagers who have the mixed blessing of being fertile in a world where women give birth to genetic monsters and there are no doctors. Nadya’s father insists that she produce an offspring with Mater, but she has a different goal in mind. Visceral and concrete, like the bunker featured herein, “Ghosts” is among my favourite stories in Epilogue. Lighter in tone but just as well constructed is Kaia Landelius’ “Sleepers”. Inhabiting some strange corner of the well-worn zombie subgenre, Landelius’ tale manages to do something slightly different with familiar material. Much bashing of the ‘sleepers’, with baseball bats and hockey sticks, ensues.

There’s something desolate about the rural Australian landscape that naturally lends itself to post-apocalyptic fiction. Jason Nahrung’s “The Mornington Ride” reminds me a little of the late Paul Haines’ novella “Wives”, and both are fine works. Here our unnamed protagonist is fleeing from his boss, the murderous Johnny Stroud, who insists on killing a family of ‘reffos’ who steal and eat a calf. Interspersed with this backstory is what happens next, as our protagonist trades his rifle and his nag for shelter, and then some medicine for passage to the aptly-named Hopetoun on the train of the story’s title. “The Mornington Ride” is my favourite story in Epilogue and I wouldn’t be at all surprised if it were to earn an award nomination or two in the year ahead.

In my view, Epilogue as a whole succeeds in achieving its stated aim of finding hope after the apocalypse. It’s a testament to the strength of the Australian speculative fiction field these days that’s there not one weak story in the anthology, even if there were a few I personally didn’t enjoy as much as those described above. The future of our civilisation might appear grim, but I daresay that the immediate future of independent speculative fiction writing and publishing in Australia looks significantly rosier.
Pete Aldin
Author 29 books52 followers
August 10, 2012
What a wonderful anthology. A real surprise, one of those impulse buys that really paid off. The range of variations on a theme demonstrated the brilliance of the book's subject matter as well as the wealth of talent out there at the moment. If you're expecting 12 Zombie stories, nothing could be further from what I discovered in here...

David McDonald's "Cold Comfort" took me back to the kinds of scifi adventure I read in my youth and my 20s; the kind of brave (and tough) new world tale that captured my imagination and got me hooked on scifi for life. It's an against-the-elements story in which our world has been completely reshaped (and reinvented) by cataclysm.

Dirk Flinthart's "The Fletcher Test" melds human angst, questions of existence (and what life actually is) and gripping projections of where AI tech might take us in the future. All of this creates a story which went where I least expected. Sheer brilliance.

"Sleeping Beauty" was one of the most original stories I've ever read, and a truly novel take on the apocalypse.

"Mornington Ride" had a pleasantly authentic Aussie flavour without reverting to Mad Max-isms. It's compelling if crude in many places (not to be read if you don't like bad language, for example), BUT it aptly captures the kind of dog-eat-dog world we can expect after the bombs have finished ruining our civilisations.

And the book closes with two stories that are entirely "left field" in terms of reimagining the apocalypse.

Wonderful wonderful collection that I will no doubt read again.

Maree Kimberley
Author 5 books25 followers
July 1, 2012
What a great short story collection this is! Expertly curated and edited by Tehani Wessely, Epilogue shines a light on a myriad of possibilities of 'and then what happened?' after a human apocolypse. The authors each approach this idea from a different angle, and it is the range of depth of ideas that gives this collection its strength.

Naturally, I had my own personal favourites. I really loved 'What Books Survive' by Tansy Rayner Roberts and 'Solitary' by Dave Luckett, as well as the fun take on time travel in Lyn Battersby's Time and Tide. The earthiness of Thoraiya Dyer's 'Sleeping Beauty' was also compelling. But no matter what your tastes in science and speculative fiction - from frontier themes to road stories to post-humanism - Epilogue has finely crafted stories that will appeal.

If you're looking for some quality speculative fiction in a range of styles, you'll love the stories in Epilogue. Highly recommended.
Rick Keuning
17 reviews
March 7, 2013
Epilogue is a great Anthology. It's only the second Australian made themed anthology that I've read and it teases me to read more. Every story left an impression on me.

A Memory Trapped in Light: The stories not finished, I want to know what happened next.

The Fletcher Test: There is hope after all.

Ghosts: Just to survive is not enough.

Solitary: How we are the same matters more than how we are different.

Cold Comfort: There is a larger world to be explored here, give me more.

The Mornington Ride: Almost the song.

What Books Survive: Who will read them.

The Last Good Town: What is good?

Thank you FableCroft, a wonderful book.
Natalie Hennessy
509 reviews20 followers
December 26, 2014
Took me long enough to finish, but I go there in the end. First of all, I loved that all of the authors were Australian since I personally don't read a lot of Australian authors.
The short stories were hit and miss for me. I especially liked Time and Tide, The Fletcher Test, Sleepers, What Books Survive. Really liked the theme of 'hope' at the end and throughout each and every story. All in all, a great book.

Nicole
272 reviews43 followers
February 28, 2014
If I could I'd go with 4 1/2 stars. I really enjoyed the theme hope after the apocalypse. Led to intriguing stories. Overall a lot of strong stories that linger with the reader after the book is closed.
Favourites in no particular order: A Memory Trapped in Light (Jo Anderton), What Books Survive (Tansy Rayner Roberts),Fireflies (Steve Cameron) and The Fletcher Test (Dirk Flinthart).

Liz
Author 13 books45 followers
January 19, 2013
There are some really stand-out stories in this anthology for me, such as Thoraiya Dyer's "Sleeping Beauty" and Tansy Rayner Roberts' "What Books Survive". It's wonderful to see some hopeful post-apocalypse tales!

Kaia Landelius
Author 3 books24 followers
Read
September 2, 2012
I can't rate a book I'm in but I need to add it or fail my books read challenge even more. I read it! I liked it! It still gets no grade. Sadface.