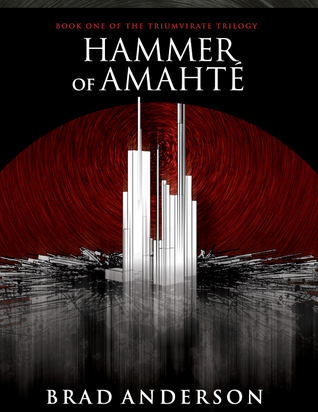 Hammer of Amahte: Book One of the Triumvirate Trilogy

4.43
7 ratings2 reviews
Rate this book
It is a dark time. For centuries after the first seedships spawned human civilizations on countless planets, three worlds - the Triumvirate - reigned supreme. But now the Triumvirate stands on the brink of collapse after a brutal decades-long war. As empires crumble, a small group of people make a discovery that could alter the course of the war and forever change humanity. Hammer of Amahte, first volume of the Triumvirate Trilogy, introduces a richly imagined universe on the cusp of change and shows the personal struggles of men and women trying to keep afloat as tides of history wash away all they have known.

6 books8 followers
Brad C. Anderson lives with his wife and puppy in Vancouver, Canada. He teaches undergraduate business courses at a local university and researches organizational wisdom in blithe defiance of the fact most people do not think you can put those two words in the same sentence without irony. Previously, he worked in the biotech sector where he made drugs for a living (legally!).

His stories have appeared in a variety of publications. His short story, Naïve Gods, was longlisted for a 2017 Sunburst Award for Excellence in Canadian Literature of the Fantastic. It was published in the anthology Lazarus Risen, which was itself nominated for an Aurora Award.

I had a few issues with some of the character's dialogue and actions - some things didn't always seem consistent with their characters - particularly Taura. I felt that as a woman coming from such a war-like culture, she would be a lot tougher than she was. The focus on her being overly concerned by the death of her crew seemed a little incongruent to me. I would think that to be a successful captain (and female at that), she would need to be harder than anyone else. (Also, although she is a female captain, all her crew seems to be male?) She is often described as having eyes like stones and appearing hard, yet her deep concern for her crew seems like it would make her vulnerable to her enemies. I don't know, I like that she's complex, I just found some things felt a little out of place concerning her.

Overall, I found the characters well-developed, and the main protagonist Marco quite likable. He might be a little stereotypical "charmer", but I'm a sucker for his type of character (*cough* Mat from Wheel of Time).

Though a little high-tech and star-treky for my tastes, I felt like the language wasn't too overdone. I liked the addition of the biological modifications in a lot of the, I guess races?, and planets. My one concern is the Kalbarians, who seem to be so advanced weapons-wise I'm not even sure how they are ever defeated. They seem to have some insurmountable advantages, I mean neural networks that connect their thinking, bullets that send back tactical information and move on their own to always find a target? How do you defeat that? Anyway, just my little peeve.

Sometimes novels are great all the way through and then blow the ending, but this one nailed it. It was a terrific setup for the next one and I can't wait to read more. I'm finding the activities taking place on the planets to be a lot more interesting than in space, so I can't wait to find out what happens next.

P.A. Wilson
Author 52 books35 followers
July 24, 2012
A rich world and lots of battles. Marco has a mission that should be easy enough. The problem is every time he gets closer to finishing his job, someone - or a lot of someones - gets in the way.
Displaying 1 - 2 of 2 reviews