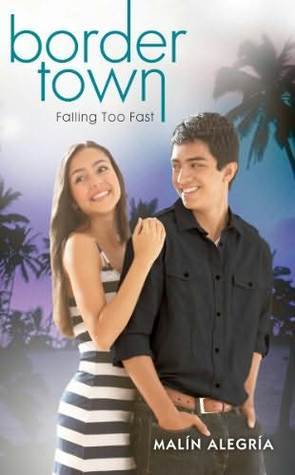 4.03
90 ratings13 reviews
Rate this book
In Dos Rios, Texas, things aren't always as they seem.
Alexis Garza has music in her blood. She's certain that one day, she'll be leaving the border town of Dos Rios, Texas behind for a glamorous life of singing stardom. Until then, however, she'll have to content herself with belting her heart out at voice classes, going to high school mariachi band practice, and helping out at the Graza family restaurant.
Alexis's ordinary life takes a turn for the extraordinary when she meets the swoon-worthy lead singer of a rival high school's mariachi band. His singing (and his smile) make Alexis melt. There's one small problem-- this suave singer doesn't seem to know that Alexis exists. She's determined to make herself heard-- no matter what the cost.

7 books62 followers
Malín Alegria was raised in San Francisco’s Mission District. She’s a graduate of UC Santa Barbara and received her MA in Education. She is a teacher, permaculture consultant, Aztec dancer, and performer. She’s preformed and wrote with Teatro Nopal & the WILL Collective. Malin’s is a member of SCBWI, TNAFA, and the ultra fabulous Nopalitas. “Estrella’s Quinceñera” was published by Simon & Schuster in 2006. Her second novel “Sofi Mendoza’s Guide to Getting Lost in Mexico” was released May 2007. Her short stories have appeared in the anthologies “Once Upon a Cuento,” and “15 Candles: 15 Tales of Taffeta, Hairspray, Drunk Uncles, and other Quinceañera Stories. Malin currently lives in California and New Mexico where she teaches,writes, and is hard at work on growing the perfect nopal.

4.03
90 ratings13 reviews
5 stars
39 (43%)
4 stars
19 (21%)
3 stars
28 (31%)
2 stars
4 (4%)
1 star
0 (0%)
Displaying 1 - 13 of 13 reviews
Erasmo Guerra
Author 10 books30 followers
December 30, 2012
While the first two books in the series were quick page-turners, this one was just okay and I struggled to get to the end. Maybe I shouldn't have read too many of these books in a row, but by the time I got to this third installment in the YA series, I was burnt out on Alexis Garza and her bratty self-absorption. She's my least favorite character. She's like bubblegum being popped in your face. The story itself is a good primer on high school mariachi groups, but it never really captured my interest like, say, an episode of Glee. Maybe, as someone who identified more with the older-sibling status of Alexis's sister Fabiola, I just wanted more of her. Still, there were a number of bittersweet moments about leaving the Rio Grande Valley, where the series is set, and how even upstate folks view the borderlands with prejudice and misinformation.
Liza
172 reviews9 followers
January 13, 2013
There were some disappointing factors to this book. It sort of reminded me of the Baby Sitters Club series way back in the 80s/90s that never stuck with one character and you learned the stories of several girls when all you really cared about was Claudia or Anne. (Sorry, little kid flashback here.) Instead of being treated to Fabiola's story we learn more about her silly younger sister Alexis. This to me was bad, because there were some issues from the last novel centering around Fabiola and Milo that needed to be resolved.

The story starts with the crazy girl, Alexis, at a brujería shop looking to buy something that will bring true love. There's a hint of foreshadowing and while some paranormal elements are brought into the short story they were never as obtrusive as in Quince Clash. You could easily dismiss them as Alexis' imagination running wild.

You just get the sense that Alexis doesn't have it together and it still very immature. Her big dream is to make it big as a musician, but she has nothing to really show for it. Yes, she does have some musical ability, but her school mariachi group before the seniors graduated last year, never gave her the opportunity to shine. You get the sense that Alexis just wants to be famous and music seems like the way to go.

Now the story begins after Alexis has a brief run in with a famous mariachi singer from another school; she falls hard for the boy. At the same time the mariachi group at her own school is a complete mess filled with misfits and of course her cousin Santiago who is now on the five year graduation plan.

The story stays light and fun as you see how the group helps Alexis win over the boy and the progress they makes as they evolve from being terrible to tolerable. Alegria also interweaves more of the social issues affecting that side of the border such as kids who are here illegally in the states, narco corridos, and prejudices faced by the people of the Valley.

I felt the end was rushed, because of a tragic event that occurred earlier in the story. The story line wasn't necessarily brushed away or cleaned up, but it was too raw of an event to focus simply on Alexis' pride in her accomplishments by the end of the book. I think the story could have been better if Alegria made the story just a little bit longer to flesh out the serious issues she drummed up.

Alexis has a cute little story, but with a rushed ending, a silly character who lacks the wits and intellect of her sister, and a story line that in no way continues the previous novel, it makes it difficult to fall in love with this story. You'll like the story as a stand alone, but all in all, Alexis probably shouldn't have been the star of this novel until Fabi's story line was finished.

Mary Louise Sanchez
Author 1 book20 followers
December 15, 2013
It's refreshing to find Latino kids on the cover of a book! Falling Too Fast, one book in the Border Town series, features the youngest Garza sister,15-year-old Alexis, a budding mariachi singer, who is looking for romance. She half-heartedly believes the old woman in the herb shop who predicts Alexis' cousin Santiago will help her meet a young man. The young man Alexis sees just so happens to be the lead singer in another high school mariachi group and Alexis uses her talents and convinces her mariachi group to help her introduce herself to the young man with an old cultural musical tradition.

Alexis is just an ordinary girls with big dreams. Alexis has a passion for music. She dreams to be a famous singer one day. Alexis is in the school's mariachi band and hopes she will be able to perform this year. Alexis meets the leader of their rival school's mariachi band. Alexis thinks he's super cute but she doesn't even know if he knows that she exists. Alexis will do whatever it takes to be noticed and heard.

This book was the 3rd book in the series and I don't think it was that great. The first 2 books made me keep wanting to read the series but now I don't know if I should read the last one after this book. Anyway, this book wasn't horrible, it just wasn't a book for me. There would be some parts were it was boring and I just wanted to stop reading, but I would keep reading to the better parts of the book. Border Town is a good series but the 3rd book might make you not want to read the last book like me. The author had a pretty good plot and some good discriptions of things but overall I think it was an ok book. I gave this book 3 stars, because the author did a nice job writing it but there were some parts that weren't the greatest things that I thought could have been a little better, then how she had it. Falling Too Fast was just a good, somewhat easy book to read.

Izabella Burzynski
3 reviews1 follower
Read
January 9, 2017
I really enjoyed this book for many reasons, I liked how the book was easy to relate to as a high school student and how the book was pretty easy to understand and comprehend. This book I feel like could have added a little more detail in understanding what is going on throughout the book. the story line of the book was good, and could be easily understand and related to. the author had done a good job on like I said making this book a friendly and easy book to read, also the idea of a high school setting helps students in high school understand the book easier because we ourselves are in high school. Trough out he book the main character goes through many conflicts and will make you want to read more. overall I had really enjoyed reading this book and suggest that you will to.
Diane Ferbrache
1,676 reviews20 followers
February 11, 2013
Teen romance set on the Texas/Mexico border. Several teens connected to each other by blood or friendship. Pretty predictable for adults, but interesting themes that should appeal to teens. Easy to read and believable.

Bea Elwood
917 reviews8 followers
January 29, 2017
Never judge a book by its cover, I was blown away with how much I liked this book. I have some students who want to read romance novels and I roll my eyes (on the inside of course) but this one I could recommend in a heart beat.

Diana
140 reviews
January 2, 2013
cute
Deena Samuel
8 reviews
May 19, 2013
This book was a real page turner, but I felt it was a bit too short for me.
Erica Dominguez
5 reviews
Read
April 28, 2014
It was a great book I enjoyed it and I didn't want to stop reading it.
Jadake P.
6 reviews
Read
October 27, 2016
it really entertain me and it is a good book
Jonas Perez
Author 6 books30 followers
February 21, 2018
This was a good quick read. I related to it personally because I am from the Rio Grande Valley, where the story takes place. Accurate, though not entirely, I enjoyed the fact that presentation of "Valley Culture" wasn't didactic but relative--this is both a strength and weakness of its presentation though. The Mestizo presentation was assumed and thereby enjoyable as relevant, but even in all its relativity it's adherence to Mexico is only nostalgic. The characters are Americans with Mexican names, remembering an old Mexican culture by default. It is an enjoyable yet. The prose are clean cut, and the story arc is innovative. I recommend to young adults, especially Mexican Americans.
Laura
1,838 reviews27 followers
November 25, 2018
I read the books out of order but it doesn't seem to have affected the storyline. I really do hope the author comes up with some new books.

This book featured my least favorite character. She wants to swallow life too quickly so we all know she's going to get burnt or burn out. She's selfish although she does begin to learn how to care about others in this book.