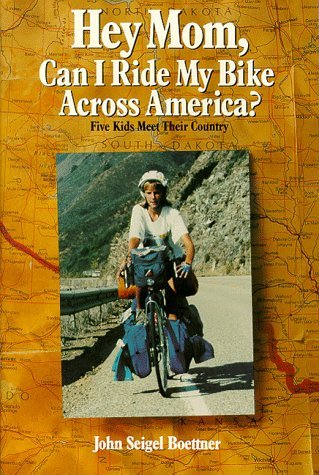 Hey, Mom, Can I Ride My Bike Across America?: Five Kids Meet Their Country

4.34
53 ratings3 reviews
Rate this book
Dead Poets Society meets Stand By Me as 5 real 12- and 13-yr.-olds ride their bicycles 5,000 miles across America. They want to see if their country is as wonderful as their teacher says it is.

4.34
53 ratings3 reviews
5 stars
27 (50%)
4 stars
19 (35%)
3 stars
5 (9%)
2 stars
2 (3%)
1 star
0 (0%)
Displaying 1 - 3 of 3 reviews
Stephen
1,501 reviews92 followers
December 4, 2015
The United States isn't a nation that makes touring it by bike easy: those who wish to do it must tackle mountain ranges, broad deserts, a cornucopia of potential natural disasters -- and that's not even including American drivers. Imagine trying to do it while simultaneously watching over five teenagers -- five kids, really, a group of three boys and two girls, all eleven between eleven and thirteen years old. That's what John Siegel Boettner, a middle-school teacher in California, did in the year of 1986. Beginning at the start of summer break, he and his wife toured with the kids from Washington, D.C. across the continent to Oregon, then down California to their home, a journey of nearly five thousand miles -- braving tornadoes, heat waves, snowstorms, and a string of mechanical problems, all in an effort to teach the kids about their country.

John Siegel Boettner isn't your usual teacher: the fact that's he willing to take care of five of his kids for four months across the nation and through a variety of disasters might already indicate that. An avid cyclist, as soon as he began teaching he organized a bicycle club and began taking his kids on extended trips called "Educational Safaris": in one, he and his wards biked through the northeast, exploring the sites of the American Revolution. Not only did the bike trips give the kids an opportunity to learn about themselves, of what they could achieve through their effort alone, but it made their history, their culture, come more alive...and such was their teacher's intention here, as after Mississippi they follow the Oregon Trail to the west coast. By day, John is their leader, captain, mechanic, and coach, helping them to organize and keep moving, and calling the shots when things get hairy...as they did, often. Unlike David Lamb's Over the Hills, Hey Mom is peppered with near-disasters, usually near the mountains. By night, he's a teacher, reading to them from the journals of an Oregon Trail pioneer whose path they follow and whose experiences are an eerie mirror of their own. The trip extends a month past summer vacation, but John feels no guilt about keeping the kids about of school. In his view, the experiences they are gaining on the road are worth far more than a month of memorization and regurgitation. This is the trip of a lifetime, the intimate details of which John accounts in the book, and when it was finished I felt sad, as though I'd been part of the experience and it was now over.

Before leaving on the trip, John read to his kids from Peter Jenkins' A Walk Across America; Jenkins, too, transversed the nation in an effort to learn about it, to spend time with its people. Like Jenkins before them, John, his wife, and the kids gain much from the kindness of strangers...and strangers across the continent are very kind indeed to a band of kids doing what most think impossible even for adults, crossing a land of three thousand miles by bicycle. Although this is the story of a journey, it's more about the people -- both the kids involved, like young Ethan who could barely ride a bike when the tale began, and the people who they meet, like the Amish folk in Tennessee. I find accounts of people walking or cycling the entire country to be fascinating by themselves, but Hey Mom is extraordinary for featuring kids, whose energy, idealism, and joy and make a work to revel in reading.

•The author giving a TEDx talk called "The Joy of Looking", in which he shares how one of his cycling students taught him the lesson of The Dead Poets' Society: gather rosebuds while ye may.. It's beautiful.
•A Walk Across America, Peter Jenkins

Jeff Rosendahl
231 reviews3 followers
October 31, 2015
Although dated, this is probably one of the best touring books I've read. I'm tempted to give it 5 stars, but I don't think it's quite _that_ good. It's a great story of 5 kids in middle school, their teacher and his wife who bike across the country east to west in 1986. Seigal Boettner does a great job capturing the kids interactions with all the different flavors of Americans, a great job capturing the trials and tribulations of their 4 month odyssey, and a great job describing his feelings and emotions. He doesn't do as well writing the dialogue...it sounds a little too bit like an episode of "Leave it to Beaver," or like we are stuck in Mayberry. It also seems like he devotes too much time to talking about his emotional state, especially as we near the end of the book. I'm guessing this is self-published, an editor could have improved the final product. But even with those complaints, still a great book overall, and highly recommended for enthusiasts of cross-country cycling adventures.

Stefan Sahlander
3 reviews
October 17, 2012
I could not join the trip originally since I'm too old and live on the other side of the world, but with this book it was a joy to, from my armchair many years later, follow this team of kids bike across America
Displaying 1 - 3 of 3 reviews