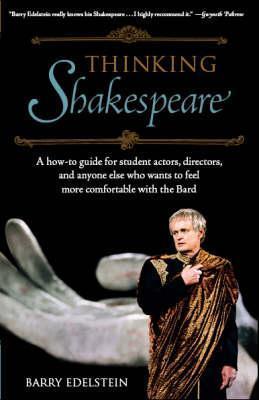 Thinking Shakespeare: A How-To Guide for Student Actors, Directors, and Anyone Else Who Wants to Feel More Comfortable with the Bard

4.64
122 ratings17 reviews
Rate this book
Thinking Shakespeare gives the actors practical advice about how to make Shakespeare's words feel spontaneous, passionate, and real. Based on Barry Edelstein's twenty-year career directing Shakespeare's plays, this book provides the tools that actors need to fully understand and express the power of Shakespeare's language.

If you're an actor, you've probably received that folio packet which I think is public domain. It's full of all kinds of folio rules about iambic pentameter, punctuation, spelling and more. However, at around 15 pages, it's crude to say the least. I received this from directors or teachers at least three times in my struggles to understand the meaning and the application of Shakespeare, and it just didn't help...at all.

I've been studying Shakespeare with a couple of amazing teachers who use this very book as their core curriculum, and my relationship with Shakespeare has completely transformed. I love it now. I can't get enough. I used to think it was boring and felt so scared whenever I had to do a monologue because I just didn't know what I was doing. I felt stupid. No more, sweet Hamlet. No more.

Edelstein fills what is essentially a text book with humor, extensive and relatable examples of all those tricky folio rules from Shakespeare's most well known plays and exercises that, with time and dedication, teach the actor literally how to think his/her way through the daunting text. Shakespeare is difficult because it's brilliant. An actor must be brilliant to tell the story. With this book as a tool, an actor has a fighting chance.

My suggestion is read this book at a comfortable pace and follow through on every single one of Edelstein's exercises. It may take a long time, but it will be so worth it.
Lisa McKenzie
277 reviews27 followers
October 20, 2011
The other night, I was helping my son to memorize the To Be or Not To Be soliloquy. The process was intense, because in order to speak Hamlet's words, my son had to think Hamlet's thoughts, and those are dark thoughts indeed. It was eerie to consider that these words, penned by one man hundreds of years ago, have been repeated somewhere on this planet perhaps every day since. Powerful stuff. Like a virus.
After witnessing this one manifestation of this one soliloquy, I was drawn to read, Thinking Shakespeare. Having read Thinking Shakespeare, well, I'm just eager to read more Shakespeare, and witness more manifestations of his work on the stage.
Niasaki
25 reviews1 follower
July 13, 2019
I thoroughly enjoyed this book, this brought to light so many interpretations and meanings in the Bards work that I had not seen before. I probably have to go over all the plays I've read again to check what I missed. It also gave tips and techniques to use during the acting process that I will surely us next time I preform in a productions. Also the writing felt more supportive than demeaning. It helped you through the methods with plenty of examples and explanations, instead of criticizing you for not understanding. I loved this book and expect to be referring to it many times in my exploration of Shakespeare's works. I recommend it to anyone interested in the Bard or if need further help with some of the literary or technical devices in his writing. (Also thanks to the podcast, No Holds Bard, who referred me to this book)

Cade Joirie
7 reviews
September 26, 2022
A wonderful, accessible book with plenty of useful insights into Shakespeare for virtually anyone with an interest in the Bard, but...there is no index. A book like this really should have one. My copy is the 1st edition. Whether the 2nd edition includes an index, I cannot say.

Jennifer
564 reviews15 followers
April 11, 2015
This book doesn't really fit any of the current shelves I use, but it sort of sneaks in on a couple because it deals with Shakespeare's plays, and it's pretty much a really long essay about how to read Shakespeare.

I would guess most of the people who come to this book have probably already read one or two (or a dozen) of Shakespeare's plays. If you're like me, and have to at least skim through (if not intensively read every word of) the forewords and prefaces, then you're probably already familiar with a lot of the material this book covers, because a lot of the basic information Edelstein covers and expands on is included as foreword material in any good, reputable edition of Shakespeare. I'm talking about the "Reading Shakespeare's Language/A Note on the Text" portions specifically--and I'm comparing Edelstein to the information in the single-volume editions from the Folger Shakespeare Library.

What the Folger editions do so wonderfully is provide context historically for the play, provide a brief summary that highlights a few of the more confusing or problematic themes that will appear in the play, and provide a resource for understanding the poetic phrasing and odd word choices and placement in Shakespeare. These three things seem to be the things that make most high school experiences reading Shakespeare unpleasant--we might be given one of these things, but we're never left to read the play as a cohesive unit, and we're rarely given all three. Edelstein doesn't touch too much on historical context, and he never focuses on a particular play for more than a chapter or two, so there isn't an in-depth analysis of themes and issues, but what Edelstein does is delve deep into the language of Shakespeare.

There were more than a few places where I found myself exclaiming to the book, "AHA, I was right! Take that, Mrs. Richards!" Edelstein's exhaustive study of how Shakespearean language works proved points I attempted to make to my high school English teacher but was shot down over, including that it doesn't make sense to pronounce the "ed" ending every time it occurs (remembered, followed, examined, etc.). However to make his points, Edelstein sometimes relies very heavily on scansion, meter, and understanding how poetry works. While I think that it's important for actors to understand how the poetic lines they may (or may not) have to speak work, there were a couple places where I felt like Edelstein's reliance solely on poetic scansion either marred the emotion or a line or scene, or suggested a different interpretation of a character than I had previously understood. The former is the more unforgivable of the two, in my opinion. New interpretations or understandings of characters is hardly ever a bad thing, but insisting on using line breaks as places to pick up a new thought--at least when I tried it while reading aloud--seemed to break up the emotive flow of a piece a little too much. In a lot of places, too, Shakespeare has punctuated line breaks, so it doesn't matter too much because there's a comma or a period or a semi-colon, but in cases where there was no punctuation I found his insistence on pauses, however miniscule, made the speeches choppy. However, this is a matter or personal preference, and I think Edelstein's point was that as actors we should think about what we're saying, and not just recite.

On the whole the book was very well put together, and I'd recommend it to pretty much anyone involved on any level with Shakespeare.

Juliet the Book Slayer
333 reviews
February 7, 2017
If you're serious about learning Shakespearian acting, this is THE book to read. (This comes from someone who's read quite a few!)

"Thinking Shakespeare" is currently out of print (??? I cannot for the life of me fathom why), so I ended up eBaying a precious copy for 125 bucks. I don't think I can give it more praise than to say that it was well worth it (and then some), and that it'll be an indispensable tool for the rest of my professional acting life.

"Thinking Shakespeare" made clear Shakespearian acting tools I have read books about previously, but not understood due to the usual, to be frank, snobbery of the author. There is none of that here - Barry Edelstein not only explains his stuff dazzlingly, he is also funny, warm, kind, patient and writes in a feministic manner. (It is always "actress" and "she" throughout the book. He even addresses "feminine endings" in verse. How kick-ass is that!?) By the end of it you'll truly feel as if he's a close friend, I can assure you. I was even a bit sad to part with him. What a profoundly gifted and articulate teacher! I really am in love with this work and will begin my re-read of it immediately.

Nikki Gatlin
6 reviews1 follower
January 14, 2014
This book is FABULOUS thus far. It gives such remarkable and candid insight into working on a Shakespearean play and the advice and exercises are so great that they transcend being just applicable to plays by the Bard.

I recommend this to any actor. Period. I ESPECIALLY recommend this to any actor looking to perform Shakespeare. It really is a wonderful tool that I think EVERY actor should have not just on their shelf, but on their nightstand, within reach to refer to all the time.
Shaina
Author 39 books5 followers
April 24, 2015
There were some wonderful points made by Edelstein in this book. However, sometimes he pounded the points out a little too much. I am an actress...some of the stuff he kept repeating I knew, and it made me feel like I was being treated like a child. However, I loved his examples and the concis ways he worded certain rules.

Magic
84 reviews
February 3, 2010
This book changed the way in which I approach acting Shakespeare. So amazingly useful, practical and well written. I must read for any actor working on Shakespeare
Denise
80 reviews1 follower
July 12, 2010
This book helped me to understand Shakespeare's ingenuity in a different way than I am used to doing:namely, through acting. This is a very useful well-written book.

Mary
23 reviews
August 23, 2010
I'm marking this "read" because I have consumed all of the pages. But I am not finished with this book--not by a long shot. I expect to refer to it All The Time. Love it.
Ben
77 reviews3 followers
August 1, 2012
This resource provides strong strategies for approaching and understanding Shakespeare.

Melissa
19 reviews
August 9, 2012
Full of useful stuff, but not a page turner..
Casey
8 reviews1 follower
February 20, 2015
Ugh. It took me waaay to long to read this. That being said, I did find this book to be well written and insightful. I actually do feel more comfortable with the Bard. Boom.
Tom Delise
59 reviews3 followers
October 13, 2011
The book is great for the actor and director.