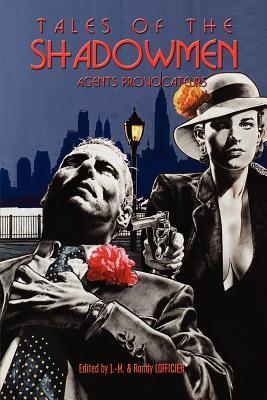 Tales of the Shadowmen 8: Agents Provocateurs

4.56
9 ratings2 reviews
Rate this book
The international anthology devoted to paying homage to the world's most fantastic heroes and villains returns in this eighth installment. This time, the stories focus on those who provoke or entice evil... Agents Provocateurs who thrive in the shadows and lurk on the periphery of our world...Gathered here in an all-new collection of amazing adventures are the terrifying Creature of Frankenstein and the monstrous Phantom of the Opera, the awesome Dracula and the Vampire Countess, the otherworldly Body Snatchers and the dead Necromancer of Averoigne, the deadly Madame Atomos and the merciless Countess Cagliostro, the Wandering Jew and the slithering Serpent-Men of Lemuria...With a special art portfolio by John Gallagher illustrating the Books of Shadows.

240 books20 followers
Jean-Marc Lofficier is a French author of books about films and television programs, as well as numerous comic books and translations of a number of animation screenplays. He usually collaborates with his wife, Randy Lofficier

4.56
9 ratings2 reviews
5 stars
6 (66%)
4 stars
2 (22%)
3 stars
1 (11%)
2 stars
0 (0%)
1 star
0 (0%)
Displaying 1 - 2 of 2 reviews
Anthony
Author 10 books49 followers
April 2, 2012
I get a real kick out of this type of anthology: great pulp-era (and earlier) characters interacting with each other, connections between characters being established. Not every story worked for me, but quite a few of them were enjoyable. My favorites in this volume were Nicholas Boving's "The Elphberg Red," in which Rudolf Rassendyl and John Watson foil the plots of Rupert of Hentzau and Josephine Balsamo; Martin Gately's "Leviathan Creek," which posits an interesting origin for the killer sharks of Jaws, among other connections; Matthew Dennion's "The Most Dreadful Monster," a quick but effective tale of Madame Atomos meeting a certain Dr. Banner; Win Scott Eckert's "Marguerite's Tears," which adds to his story sequence regarding what happened to those individuals irradiated by the Wold-Newton meteor strike; and J.M. and Randy Lofficier's "The Affair of the Necklace Revisited," one of two tales featuring The Avenger. One of these days, I'd love to have a story of my own appear in a "Shadowmen" anthology.

Perfect for any fans of turn of the century mystery and sci-fi or Alan Moore's League of Extraordinary Gentlemen.

Like with any anthology, there are great stories and not so good ones, but overall a fun read, full of brilliant ideas and clever team-ups.