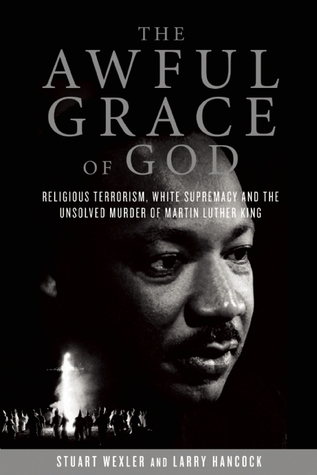 3.52
21 ratings5 reviews
Rate this book
The Awful Grace of God chronicles a multi-year effort to kill Martin Luther King Jr. by a group of the nation’s most violent right-wing extremists. Impeccably researched and thoroughly documented, this examines figures like Sam Bowers, head of the White Knights of the Ku Klux Klan of Mississippi, responsible for more than three hundred separate acts of violence in Mississippi alone; J.B. Stoner, who ran an organization that the California attorney general said was “more active and dangerous than any other ultra-right organization;” and Reverend Wesley Swift, a religious demagogue who inspired two generations of violent extremists.

United in a holy cause to kill King, this network of racist militants were the likely culprits behind James Earl Ray and King’s assassination in Memphis on April 4th, 1968.

King would be their ultimate prize—a symbolic figure whose assassination could foment an apocalypse that would usher in their Kingdom of God, a racially “pure” white world.

Hancock and Wexler have sifted through thousands of pages of declassified and never-before-released law enforcement files on the King murder, conducted dozens of interviews with figures of the period, and re-examined information from several recent cold case investigations. Their study reveals a terrorist network never before described in contemporary history. They have unearthed data that was unavailable to congressional investigators and used new data-mining techniques to extend the investigation begun by the House Select Committee on Assassinations.

The Awful Grace of God offers the most comprehensive and up-to-date study of the King assassination and presents a roadmap for future investigation.

3.52
21 ratings5 reviews
5 stars
6 (28%)
4 stars
5 (23%)
3 stars
6 (28%)
2 stars
2 (9%)
1 star
2 (9%)
Displaying 1 - 5 of 5 reviews
Pete daPixie
1,505 reviews3 followers
June 3, 2016
The assassination of Martin Luther King, over four decades after the event, remains a tragedy clouded in many facets of mystery. These dark clouds are what precipitated the H.S.C.A. to re-examine the case back in the 1970's and created further pursuit with the King family civil action against Lloyd Jowers in 1999.
King's murder has continually generated theories and revelations of conspiracy and cover-up, as well as the simplistic Ray/Bridgeman/Sneyd/Galt guilty accounts. Investigations by researchers have pointed fingers of suspicion at F.B.I.'COINTELPRO' stalking, military special forces involvement, C.I.A. agents, manipulation of security in Memphis. Everything from pro-conspiracy indictments from Dr.Philip H. Melanson in 1989 to the more recent lone-nut travelogue from Hampton Sides.
'The Awful Grace of God', published in 2012, is co-authored by Stuart Wexler and Larry Joe Hancock. Here is a book that poses some legitimate questions as opposed to bland answers. As Gerald K. McKnight states in his Foreword, "the authors do not pretend to fully resolve Ray's actual role, while considering arguments both for and against his possible act as Dr. King's killer." However, Wexler and Hancock have closely examined many of the charges of governmental involvement, and their investigations cast doubt on these theories.
Certainly this is a case to split the jury. The cut out character 'Raoul' points to Ray's obfuscation and guilt, yet the CB radio getaway broadcasts point to conspiracy, also the Birmingham gun purchase indicates 'patsy'.
Has the jury reached a unanimous verdict?

Ceeneye
1 review
March 7, 2012
Sadly enough, a pivotal moment of American History currently runs the risk of being self-servingly distorted. And I use the modifier “sadly” because, in the process, the general public suffers the potential to be misinformed, thus misled. However, I would like to stress that not all will be misled; rather, there are some who know precisely what is taking place . . . better yet, what already has taken place!

Specifically, I’m referring to the writing duo of Stuart Wexler and Larry Hancock and their collaborative hodge-podge of a book titled, The Awful Grace of God: Religious Terrorism, White Supremacy and the Unsolved Murder of Martin Luther King. Long a student of the MLK assassination and James Earl Ray’s alleged role, I heard through the “grapevine” that two Texas-based writers named Wexler & Hancock, with strong ties to COPA/Coalition on Political Assassinations, were coming out with a book on the MLK assassination and James Earl Ray’s purported involvement. Since I was familiar with COPA, some of its life-long members, and, more importantly, what COPA stood for—seeking the TRUTH, minus input from the mainstream, politically-correct media—I awaited Wexler & Hancock’s book, figuring it would be an objective, unbiased work . . . then my eyes were opened!

Surfing the Net, I happened to stumble upon an article by Jerry Mitchell, an investigative reporter for the Mississippi Clarion-Ledger newspaper. In an article titled “Justice,” and dated March 11, 2010, Mitchell wrote:

“On the back roads taken by James Earl Ray prior to killing Martin Luther King Jr., a number of calls were made from pay phones to Mississippi, FBI records show.

“Stuart Wexler and Larry Hancock, authors of a new book, Seeking Armageddon: The Effort to Kill Martin Luther King Jr., found the Documents in a search through FBI files.

“Records detail the FBI’s exhaustive investigation of every pay phone call made on the route that Ray and his pal, Charles Stein, took from Los Angeles to New Orleans in mid-December 1967.

“So far the authors haven’t been able to track down two phone calls made to Mississippi. Each number was unlisted.

“In those days, Laurel was the headquarters of the White Knights of the Ku Klux Klan in Mississippi and the home of Imperial Wizard Sam Bowers. The number here doesn’t match the one for Bowers’ business, Sambo Amusement.

“FBI records mention the White Knights’ offer of a $100,000 bounty to kill King—a bounty Ray may have believed he would get of he killed King.”

So, what we have, here, is this: When James Earl Ray and Charlie Stein made the roundtrip from L.A. to New Orleans in mid-December 1967, the FBI was able to track down the “exact route” they traveled?!?! I doubt either Ray or Stein could’ve retraced that exact same journey with precision. Still, the FBI was able to identify every pay phone call made on the many roads and highways of that trip?!?! Are they, the FBI, saying they went to every single pay phone on this extremely long roundtrip, all the way from the West Coast to the East Coast, and checked out every single call made from thousands of pay phones?!?! Remember, the FBI are mere human beings, not David Copperfields; nothing short of a Divinely-inspired magician could’ve identified the “exact” route Ray and Stein traveled and, also, have located ALL the pay phones on that same route, much less have tracked down ALL the calls made from ALL the pay phones! During this trip from L.A. to New Orleans by Ray and Stein in mid-December 1967, Wexler & Hancock report that one of the calls (as mentioned) was made to a-still- unidentified number in Laurel, Mississippi, which conveniently (for those who attempt to connect Ray to white supremacists, etc., at any cost, regardless the hard facts) was the home to Sam Bowers, Imperial Wizard of the KKK in Mississippi.

The harsh facts, as I assess them, are:
*There is NOT one single thread of credible evidence to support the theory that James Earl Ray ever made any call, at any time, from a pay phone to ANYONE in Laurel, Mississippi, much less to KKK Imperial Grand Wizard Sam Bowers. The mere implication of such—voiced by Wexler & Hancock, and, worrisomely, perpetuated by investigative journalist Jerry Mitchell—is so weak and lame that it hints of coming from someone who has been clinically diagnosed as “mentally challenged.” To say that Ray might have made a call from a pay phone (somewhere between L.A. and New Orleans) to Laurel, Mississippi, to the home of KKK Imperial Wizard—even though the number in Laurel was in no way directly connected to Bowers—and feebly imply that this “mystical” call could, somehow, some way, connect James Earl Ray to the KKK and a “supposed” $100,000 bounty on MLK’s life—which, by the way, never has been irrefutably established—is, in terms of basic human logic and sanity, comparable to the following scenario:
There is a serial killer on the loose in Seattle, Washington. You live in Jacksonville, Florida, and, over a period of time, you’ve made a few calls from your home in Jacksonville to several numbers in Seattle. Wexler and Hancock are researching for a book on this Seattle serial killer, and they conclude that since you made some calls to Seattle, you might be in cahoots with the serial killer. It is so lame that it should be downright insulting to anyone with a sane, objective, unbiased thought process.
*On page 246 p\of their book The Awful Grace of God . . ., Wexler and Hancock cite as a source author/attorney Gerald Posner’s book Killing the Dream (about the MLK assassination). What Wexler & Hancock fail to mention is this: Posner, long known as governmental mouthpiece who’ll write whatever about whomever for enough money, was fired in February 2010 for “plagiarism” from his job as “lead investigative reporter” for the Daily Beast, an online tabloid then-owned by the Miami New Times newspaper. Either Wexler & Hancock are naïve and didn’t conduct the research necessary to uncover that Posner is “not a reliable source” to cite, or, rather, they were fully aware of Posner’s plagiaristic legal problems and felt they could go ahead and slide it by the gullible public without ever being challenged. Well, it stands to reason, now, that the dynamic duo of Wexler and Hancock have been identified for what they are, pigeon-holed, and duefully challenged!
I did attempt to read Wexler & Hancock’s The Awful Grace of God, but it was so full of flimsy suppositions and so lacking in substance that it (reading the book) proved to be one of the more arduous tasks I’ve undertaken in a long time—an exhausting mental workout. However, regarding this book, I did find one aspect to be quite phenomenal: That Wexler & Hancock did manage to bamboozle a publishing house into buying off on this colossal miscarriage of historical justice and get into print such a disgusting book!

(NOTE: For those genuinely interested, cross reference what you’ve just read with the folks at COPA/Coalition on Political Assassinations. You can find their address—Facebook, website, etc.—by going to google and typing in “COPA.” See for youself if everything you’ve read here doesn’t check out.)

Everydayreader1
635 reviews32 followers
January 23, 2020
Whether or not you believe Dr. Martin Luther King, Jr. was murdered by James Earl Ray, acting alone, or was murdered by individuals conspiring to do so, this book is a fascinating and informative read. It details many of the hate groups active in the 1960s in the United States, their activities, and their interactions with one another.

One of the fascinating and totally abhorrent truisms expressed in this book is the number of Christian pastors who are openly segregationist, at best, and haters of African American people and others, at worst. It is disgusting. What this book did for me, among other things, is show me that hatred and racism is even more wide spread than I previously chose to believe. I am better informed for having read this book.

The real story of all that were involved in the assassination of MLK will probably never be known.
Displaying 1 - 5 of 5 reviews