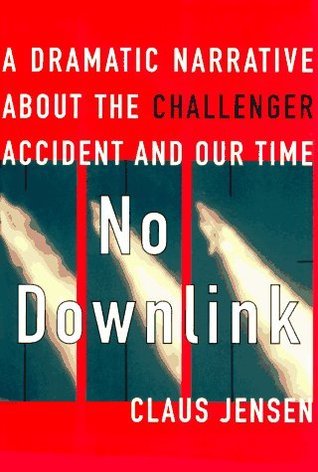 No Downlink: A Dramatic Narrative about the Challenger Accident and Our Time

4.24
17 ratings3 reviews
Rate this book
Sounding a warning about our dangerous reliance on technology and its complex infrastructure, this intriguing study of the Challenger tragedy argues that the disaster was inevitable because of the perilous interrelationship among politics, big business, and science.

The author, a huge fan of Richard Feynman, draws on Feynman's work to discuss the problems and events leading up to the Challenger accident. I remember being at we work when one of the other deans popped in to report the explosion. This was still when Shuttle launches were watched with great interest by the public and the presence of Christa Maculiife added especial interest. Her kids were watching in school. Just imagine...

The Rogers Commission was the result, and Feynman's famous demonstration with ice water and the O-rings made everyone's favorite list of stories. Reagan in his memoirs dismisses the accident in two sentences. We had a problem, identified it, and got on with things. The author explains the systemic flaws in this book that cannot be dismissed so easily.

NASA was symbolic of large systems that surround us today, all very complex, that often devolve into uncontrollable entities where individuals eschew responsibility and suffer from bitter internal politics. Jensen examines the role of management theories in the structure of these large scale systems and the rise of HR (now, as we all know, totally out of control.) He cites Weber’s book on management (it’s impossible to have a large system without a bureaucracy) and discusses the set of principles Weber regarded as key. Note that one of them communication, and how to sort out what’s important from the river of data, was to play a part in the Challenger disaster.

Jensen does a very nice job of the examining management change during the early 60's you have a cyst was on teamwork working together I'm not punishing people for failure and the way management changed over the years before the Challenger accident is instructive He draws heavily in this section on a book I think everyone should read: Normal Accidents. The substantial disadvantages of tightly coupled systems resulted in several problems for NASA and the Apollo and Gemini programs.

Another interesting facet of the book is his examination of the relationship between the industrial/military complex (as defined by Eisenhower) and how NASA was taken over by the military once the lustre of space exploration had waned. The defense department and contractors had so intertwined contracts with thousands of communities and businesses, that it became increasingly difficult for Congressmen to vote against military (and by extension NASA since the military was now often dictating NASA specs) expenditures.

Soon, as military companies merged large monoliths were created who, thanks to cost-plus contracts, could charge whatever they wanted. We had created a society of state capitalism. But it wasn’t just corporations who fed at government's teat. Universities fought to get grants at the expense of academic freedom. Soon an astonishing 88% of CalTech’s budget was from the government; 66% of MIT’s and even 25% of Harvard’s.

Even as the military denigrated the civilian NASA’s efforts, they were attempting behind the scenes to gain control over the program and the budget. Edward Teller was pushing Star Wars to a technologically ignorant president who loved the fantastical concept. (Never mind that cost estimates approached one trillion dollars -- the balance wouldn’t come due until he was out of office.) NASA meanwhile, had been taken over by true believers ever mindful of the need to keep the budget money flowing. Shuttles were often cobbled together from cannibalized parts from other shuttles to keep to the schedule. (The Air Force had estimated. there was a 1 in 35 chance of a disaster, making the program the most dangerous technological initiative ever.) NASA was not above telling its own version of everything. “Of all the organizations that I have dealt with … I have only seen one that lied. It was NASA. From the top to the bottom they lie … The reason they lie, of course, is because they arc wrapped up in a higher calling. In their eyes they arc white lies. They tell lies in order to do what has to be done. Because in the end the result will be for the betterment of the public. So they arc not lying from evil. But. nevertheless, they are lying.”
Can you imagine starting from scratch and putting a man on the moon in today’s contentious environment? We’d never make it to Boise.

And then they wanted to put non-test-pilots on the thing. The idea that an ordinary citizen could travel along was strongly resisted by the astronauts who understood the risks, but management wanted to show the public that space travel could be safe as commercial air travel. But no flight went without some difficulty. In one case a supplier had left out two pins from a spacesuit. Metal shavings were found blocking an oxygen release vent. Fortunately, the mission had to be cut short for other reasons. Had they tried to use the spacesuit it could have exploded, possibly smashing a hole in the orbiter. Problems with brakes were endemic. And the tiles (later linked to the Columbia disaster) were a constant problem.

The problems with the Columbia in the mission preceding that of the Challenger laid the foundation for its explosion. Delayed seven times, it was supposed to carry a Congressmen (who claimed God was instrumental in his going) into space. Each delay meant the countdown (some 2,000 pages) had to be restarted. Then there was a weather delay in getting the Columbia back, a problem because they needed parts off it for the Challenger. Reagan was feeling the pressure from Mondale to do something about education, so sending a teacher up on the shuttle was to afford him multiple opportunities to show off his emphasis on education and undercut Mondale. And the news media didn't help either with constant sarcasm about the delays. Peter Jennings reported that NASA was being challenged to get Challenger off on time. The NASA manual with regard to cold was changed several times to fit the circumstances. So the pressure to launch was immense. And we know the result.

Less a history of just the Challenger disaster, Jensen writes of the history of rocket development in the first section at some length, a distance some readers who prefer focus on the Challenger accident may not wish to travel. I thought it was excellent and provided a good background for some of the technical detail down the road. An excellent book.

Ticky Sowdenham
22 reviews1 follower
March 10, 2019
This book is very well-written and thoroughly explains the cultural shifts at NASA that led to the Challenger disaster.
Chad
21 reviews
May 9, 2012
I’ve had this book for ten years but had not read it until now. I shudder to think how many times I moved it, but I'm glad I rediscovered it. The Shuttle flyover two weeks ago reminded me that I owned it, and I was pleasantly surprised how good it was. It could be assigned as reading for college courses in psychology, management, engineering, and any number of other disciplines.

Challenger exploded when I was six years old. It is the first major world event that I remember. I have more detailed memories about the fall of the Berlin Wall and the first Gulf War, but the Challenger disaster is the first "where were you" moment of my life. I remembered that it was about O-rings, and I also remembered that it had been determined to be a preventable disaster, but I wasn’t old enough to have a real understanding at that point.

I would say it was not entirely what I expected, but in order for that to be true, I would have to have had some sort of real expectation. I did not. However, I was happy how broad the book was. The first 20 pages are about the Challenger disaster. That was predictable enough. However, the following 100 pages are a history of spaceflight from Newton's Laws of Motion through Apollo 11. I wasn't expecting this, but I completely geeked out on it. My only complaint is that there were not enough segues in parts. This historical section is nearly, but not entirely, in chronological order. It was so close to being in chronological order that it was a little bit disorienting when the author would jump back a few years to highlight a different point.

I suppose I thought there would have to be some limited history and background information, but this was exceptionally thorough and interesting. Jensen takes us in detail though the entire 20th century history of rocketry and unmanned, then manned space flight. Apollo 13 gets a lot of attention (and here I realized that I NEED to re-watch that movie, although based on what I've read in No Downlink, it gets excellent marks for accuracy).

It's not until almost halfway through the book that we come to the real history of the Space Shuttle itself: design, development, the fight for funding. Reading about the development history of Columbia - the first shuttle - was chilling because of the detailed description of the problems related to its thermal tiles, the same tiles that would be struck during launch in a fatal blow to that shuttle in 2003. Also going on the to-read list: a book about the Columbia disaster.

The second half of this book is absolutely riveting. I had long forgotten that it was a translation. Aside from one paragraph that didn't seem to fit where it ended up, everything flowed smoothly. Jensen’s recounting of the investigation of the Rogers Commission is as exciting as any thriller, and this book wound up being as much of a page-turner as anything I’ve read recently.
Displaying 1 - 3 of 3 reviews