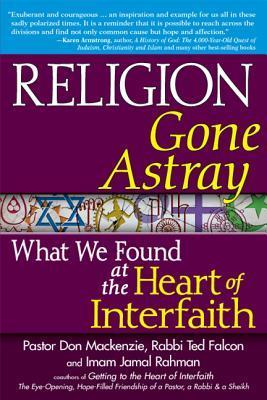 Religion Gone Astray: What We Found at the Heart of Interfaith

3.80
45 ratings10 reviews
Rate this book
Welcome to the deeper dimensions of interfaith dialogue--exploring that which divides us personally, spiritually and institutionally.

"We believe that interfaith dialogue holds the key to a healing that calls us back to purpose and to meaning. We have risked confronting aspects of our traditions usually hidden, and the consequences have been deeply life-affirming. We risk becoming vulnerable as we share awkward and even unacceptable texts and interpretations, but it is this very vulnerability that allows our dialogue to move forward."
--from the Introduction

Expanding on the conversation started with their very successful first book, the Interfaith Amigos--a pastor, a rabbi and an imam--probe more deeply into the problem aspects of our religious institutions to provide a profound understanding of the nature of what divides us. They identify four common problem areas in the Abrahamic faiths:

Exclusivity Staking Claim to a One and Only Truth

Violence Justifying Brutality in the Name of Faith

Inequality of Men and Women The Patriarchal Stranglehold on Power

Homophobia A Denial of Legitimacy
They explore the origins of these issues and the ways critics use these beliefs as divisive weapons. And they present ways we can use these vulnerabilities to open doors for the collaboration required to address our common issues, more profound personal relationships, and true interfaith healing.

3.80
45 ratings10 reviews
5 stars
15 (33%)
4 stars
14 (31%)
3 stars
9 (20%)
2 stars
6 (13%)
1 star
1 (2%)
Displaying 1 - 10 of 10 reviews
Aastha Mehta
62 reviews21 followers
October 30, 2021
The word "Religion" is thrown around very casually. Especially when there is polarisation amongst people at global scale, religion happens to be punching bag. This book makes an honest attempt to acknowledge that people and religious institutions have lost themselves in the choppy waters of hatred and misinterpretation.
Bringing to its readers the real meaning, the core teachings and true spirit of all three Abrahamic religions- Judaism, Christianity and Islam, the authors who are themselves a Rabbi, a Pastor and an Imam have been a success in initiating an interfaith dialogue. The book deals with 4 sore issues which society has had with religion and religious institution: exclusivity (a claim that one's own religion is superior and one's own God the only God), violence (hatred and war propagated in the name of one's religion), inequality between men and women and homophobia. The sheer candour of all three authors to face the issues which plague their scriptures and texts while dealing with these four troubling issues is worth appreciation. While trying to draw commonality amongst all three, a brave effort is made to give modern contextual interpretation to their religious verses. Depending upon readers own ideology, one may or may not agree with everything that is written, but the book does give you a chance to ponder upon the preconceived notions with us. By drawing from their own personal experiences (some prejudicial even), the authors bring us into their own intimate worlds where reality is often distorted in the name of religion. This book is a joint effort for all three authors to bridge the enormous gap between religious identities and ideologies.
Jess Chancey
12 reviews1 follower
February 18, 2021
They tried; bless their hearts, they tried. I commend the efforts for interfaith conversation, and I thoroughly enjoy learning about various religions from adherents to those religions. However, these three men (who call themselves the "Three Amigos," though none of them is Latinx) used some very problematic examples to illustrate what they seem to think of as feminism and acceptance of LGBTQ+ people. For example, referring to LGBTQ+ as "alternate sexualities" only serves to reinforce heteronormativity. They also reinforce the binary between men and women rather than recognizing the full spectrum of gender identity and expression. I do have hope, though, that they could learn and do better in a future edition of the book, if only because they do recognize their own limitations.

Ahmed
7 reviews
May 11, 2018
Arguments are simply not convincing
Shirley Freeman
1,103 reviews10 followers
Read
October 15, 2012
We read this for a book group and I generally liked it -- because I agreed with it. After 9/11, Rabbi Ted Falcon, Pastor Don Mackenzie and Imam Jamal Rahman developed a close friendship and subsequent interfaith dialog. In this book they highlight what they believe are their religion's 'core' teaching (Oneness, Unconditional Love, Compassion) and they talk about areas in which their religion's texts are inconsistent with core teaching. They identified five troublesome areas where they believe each of their religions have struggled with compatibility between text/tradition and core teaching -- Exclusivity, Violence, Inequality of Men and Women, Homophobia, God and Revelation. I especially liked the chapter on God and Revelation. One of my favorite quotes is from Imam Jamal - "If the Face of Allah is everywhere, it behooves us to spend less time and energy on trying to 'understand' God and more time living in a way that expands our awareness of God in every face we meet."
Sally
1,477 reviews50 followers
February 20, 2012
A discussion from the three Abrahamic perspectives of some of today's main difficult areas in these religions: exclusivity based on having the only truth, violence justified by religion, inequality of men and women promoted by religion, and homophobia. There is some good material here, which would be particularly useful to people within the Abrahamic traditions (which I am not). Statements like the following about God made me glad I read it: "That name-which-is-not-pronounced consists of the four Hebrew letters yod-hay-vav-hay and is a form of the three-letter verb root hay-yod-hay, which means "to be." The unspoken name, comprising these four letters, can best be translated "That which is." The name refers to Being without limitation of time or space." (Rabbi Ted Falcon)

Gaylene
48 reviews4 followers
December 3, 2011
The second book written by these three faith leaders, addresses some of the more difficult questions in each tradition. Each author wrote a section on the problems of exclusivity, violence and brutality, inequality of men and women, and homophobia or the denial of legitimacy.
I especially liked the depth of theological insight each author shared in the section following the specific discussion of the four "difficult topics".
There is much to consider in this book and the authors give specific questions to ponder as the reader works through each chapter.

Connie Backus-yoder
112 reviews3 followers
December 29, 2014
As much as I liked the book, there were still some uneasy moments while reading the Muslim side of Interfaith. Reading about the violence of various Muslim groups in the world tempts me to negate everything the Imam shares about the good side of Islam. Yet, in Christian history I find atrocious acts of barbarism each brother against the other of beheadings, burnings at the stake, and etc. It seems we grew out of it, or did we? Maybe Islam will grow out of it too.
Meepspeeps
627 reviews
August 2, 2012
I think the authors helped continue the discussion by tackling difficult subjects across the three major religions such as religious wars and gender inequality. I thought some of the attempts at adjusting the interpretations of offending verses in holy books to be a bit of a stretch. Worth reading in a group.
Marie Laidig
31 reviews
March 20, 2014
It had some good points, and did explain some of the reasons why these religions do what they do. More of tribal rules than actually spiritual. However, there are parts of the book that get a little too deep for me in theology so I would have to put it down for awhile.
Jean
187 reviews8 followers
June 9, 2014
Excellent discussions by Rabbi, Christian minister and Muslim Imam on how 3 major religions so often go astray and cause havoc in our world. Not an easy read but worth it.
Displaying 1 - 10 of 10 reviews