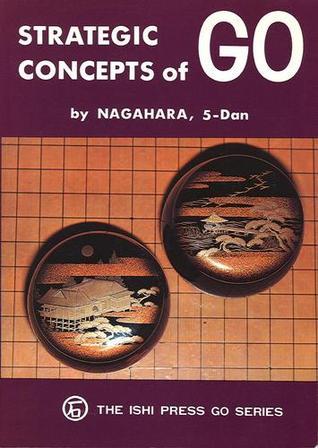 Manny
Author 28 books13.4k followers
February 16, 2016
This short book describes the eight basic strategic principles of the game of Go, and if you're a reasonably good chess player then I kind of recommend looking at it. The striking thing is that most of Nagahara-san's principles are very general - almost philosophical, in fact - and you sort of recognize them from your chess experience, but oddly enough you find you don't have a word for them. It's a strange feeling. After a while, you draw the conclusion that Go theory has to be more advanced than chess theory.

In some cases, you almost have a word. Two of the most basic ideas in Go are sente and its converse gote. Sente is sort of similar to what chess players mean when they say "initiative" or "tempo", but it's more precise. If you start a combination which is intended to achieve something - maybe you want to save a group of your stones from being killed - there will be a sequence of moves where you do something, and your opponent replies, and then you do something else, and so on. The question is who plays last. If your opponent plays last, you can now decide what do next, and you've finished in sente; you've forced him. If you play last, your opponent decides what to do next, and you've finished in gote; you've been forced. The initiative is valuable, so finishing in sente is worth a lot. People expend a lot of cleverness to try and grab sente.

So that's pretty familiar, but other concepts are harder to pin down. Sabaki is another very important concept. Ideally, you'd rather not get into a fight in an area where your opponent is strong and you're weak - but sometimes it's unavoidable, and that's where sabaki comes in. It means playing your stones lightly, so that you don't mind losing a few of them as long as some others survive and you establish a base. The same principle can apply in chess too; everyone knows that in some situations the right thing to do is accept that you're going to lose some material, and try to get positional compensation for that inevitable loss. But I'm struggling to find any way to say it explicitly.

The one that's strangest of all is aji, which sort of means "potential" - except that, once again, the Go term is much more precise. Once some stones are on the board, there are always a lot of possible sequences you can play which might turn out to be useful. Looking at what's going on in the corner over here, I could play this to get an outside wall, or I could play that to get some territory, or I could play the other thing to cut the connection between two of my opponent's groups. But I can only do one of them. You say that each of these sequences is a piece of aji. Usually, I don't know which one will be most useful to me, so I wait until I have a reason for picking one rather than another, and then I take my opportunity. Playing a forcing sequence too early is a beginner's mistake, and it's called ajikeshi - erasing your aji. Chess players sort of know about this too. There's a much-quoted proverb, "Patzer sees a check, patzer checks". And Nimzowitch famously said that the threat is stronger than the execution - if you look at the context, you see, clear as day, that he's warning you about ajikeshi. But no one's invented a word that's caught on.

The more I think about it, the weirder it gets. I mean, us Europeans are the advanced culture, right? But somehow these Chinese and Japanese and Korean guys seem to be way ahead of us. How did that happen?

Frank
352 reviews
June 16, 2022
This is kind of an old book by go standards. It includes several patterns which were standard when the book was written but which have become somewhat dated today [2021].

However the reasoning and explanations of moves and strategy remain perfectly good. I am finding it absorbing and useful, even today. And it makes me happy when I figure out the answer to a problem. The problems are close to dan level I think. And they illustrate good concepts for playing this classic game.
Jim
635 reviews97 followers
Want to read
March 30, 2016
I have seen beautiful moves in chess but know nothing of go. (Know no go)

Perhaps knowledgeable go players might look up these two moves and comment here if they agree they are beautiful.