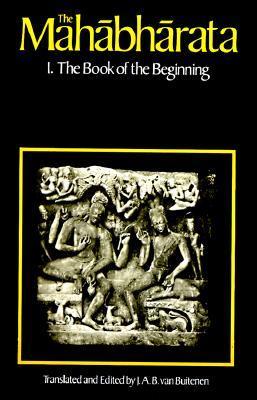 The Mahabharata, Volume 1: Book 1: The Book of the Beginning

4.53
87 ratings6 reviews
Rate this book
The Mahabharata, an ancient and vast Sanskrit poem, is a remarkable collection of epics, legends, romances, theology, and ethical and metaphysical doctrine. The core of this great work is the epic struggle between five heroic brothers, the Pandavas, and their one hundred contentious cousins for rule of the land. This is the first volume in what will ultimately become a multi volume edition encompassing all eighteen books.

12 books6 followers
Johannes Adrianus Bernardus van Buitenen (1928 - 21 September, 1979) was an Indologist at the University of Chicago where he was the George V. Bobrinskoy Professor of Sanskrit in the Department of South Asian Languages and Civilizations. His interests ranged widely over literature, philosophy and philology but toward the end of his career he focused primarily on the Mahābhārata.

van Buitenen studied with Jan Gonda at the Rijksuniversiteit, Utrecht (since 1990 Universiteit Utrecht). His proefschrift was published in 1953 and he emigrated to America where he took a position at the University of Chicago, remaining there until his death in 1979 at the age of fifty-one.

4.53
87 ratings6 reviews
5 stars
58 (66%)
4 stars
18 (20%)
3 stars
10 (11%)
2 stars
1 (1%)
1 star
0 (0%)
Displaying 1 - 6 of 6 reviews
Ramya
301 reviews5 followers
November 16, 2013
Major scholarly effort to translate without interpreting the longest epic poem (written in verse) in the world I.e. ten times the length of the Iliad and Odyssey put together-- The Mahabharatha. However, despite the hard-core attention to referencing and keeping within the scope o the texts -- the reading is tough and dry. You can find intellectual satisfaction only if yo have some prior knowledge and context with which to digest the stories. And, never where the inter-woven complex story within stories to be read by oneself in a single sitting! They were and are meant to be recited and interpreted verbally and visually for the receiver as a gift of knowledge, insight, and ancient history.

Tea Nicolae
13 reviews45 followers
December 17, 2020
the greatest translation in English imo! :)
Saidul Hoque
1 review
September 27, 2022
Nice book and I like to read very much
Ryan Guide
10 reviews1 follower
July 8, 2008
Wow! The Maha Bharata... the longest book on earth! This is the first volume 'expertly' translated into English from Sanskrit. Unfortunately, the translator was killed in a car accident or something less than halfway through the translation. Oddly, one of his students happened to be a Sanskrit teacher at my university and refused me tutelage despite my familiarity with his master's works. Sad.
There's another "Victorian" English translation from 100 years ago that I was 'forced' to read, and it was decent but lacking to some extent, in aesthetics and (contemporary) meaning... a good read (rather, the only), none-the-less.
Just recently, I discovered another translation that has been happening over the past few years, and I'm very tempted to check it out.
If you like the Bhagavad Gita (especially the ISKCON version, or just happen to like Robert Oppenheimer) then check this out! There are other great books like: "The Temptation of Karna," and "The Colloquy of the Brahmin and the Hunter (Fowler)."
It's been 10 years, but I remember these texts like I read them yesterday... they'll definitely enrich your life for the long run (Ghandi used to read'em every day... ha ha).
Silvio Curtis
596 reviews23 followers
October 2, 2009
This is the first volume (in a translation which I’m not clear if it will be finished or not) of the Mahābhārata, an early Hindu epic and religious text that is the longest written epic in the world (even if a little of it is in prose). All of what I’ve read so far is really, really, big on interesting digressions and stories within stories, but this part has the most. In fact, it takes half the volume, or a couple hundred pages, before the main plotline starts to appear through the miscellaneous lore about the gods and various earlier sages and heroes. By the end, though, it has introduced the five royal Pāṇḍava heroes and their jealous, scheming cousin Duryodhana.
Brandon Kendall
19 reviews1 follower
January 12, 2008
many different translations of this story and not sure which is the best, but these myths are very complex and confusing.. not an easy read but that is its charm.. deciphering ancient wisdom is never easy.
Displaying 1 - 6 of 6 reviews