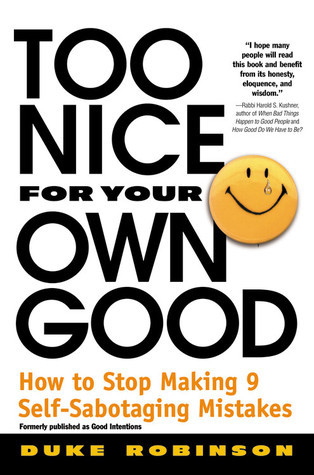 Too Nice for Your Own Good: How to Stop Making 9 Self-Sabotaging Mistakes

3.48
1,587 ratings197 reviews
Rate this book
Are you, like many of us, too nice for your own good? This remarkable book will empower you to get what you need and deserve,out of life...and still be a nice person!
If you're like most folks, you were raised to be "nice". Yet now you find yourself asking: "If I'm so nice, why isn't my life better?" Renowned minister and lecturer Duke Robinson has the answer. Robinson says that well-intended behavior is essential to a humane society, but carries a down side. Being nice often means we take on too much, tell little lies, strive endlessly for perfection, and fall prey to other self-defeating behaviors. Now Robinson outlines the nine unconscious mistakes nice people make daily, and he shows how to correct them and avoid unnecessary stress with life-affirming actions. Learn how to:

Say "no" and save yourself from burnout
Tell others what you want, and actually receive it
Express anger in healing ways that maintain valued relationships
Respond effectively when irrationally criticized or attacked
Liberate your true self. 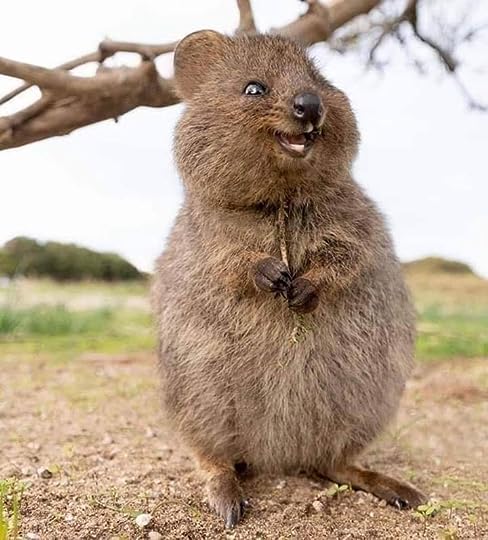 
ROUH
66 reviews3 followers
January 16, 2023
That was like my mother's talk, for stop being good and nice, to stop consuming my energy and emotion for the sake of my freinds relief or the society beliefs in me!!

Although it was recommended by her.

First of all every body quiet understand my hate to those kind of Non-fiction books that most of the author don't mind to understand that what they are advising us is just out of hand; It's easy to speak but gets so hard when it comes to act!

I read many books of this type of self dhdh but I don't get to complete it ,But this book was so great; Robinson had discussed, adviced and made some realistic examples of How to stop and think a little about your own self ,your own mental health, YOURSELF!

Wasn't boring ,was so practical ,he had mentioned some of his own experience without being so HEROIC VERSION OF HIMSELF!
I also noticed that he was speaking to the people who's suffered being nice to others and neglecting their selfs ,And he spoke to the people who judge and criticize others without noticing that it hurts,and It mattered!!

I am not sure if the opposite of being nice to people is being mean to them , also I don't think that you have to be selfish to show caring for yourself;
I believe there is always a mediate in somewhere there .
You can be nice by just being honest,
You can just give..for whom who deserves, Don't get fooled by people's talk ,Don't let anyone tell you're not enough!

Highly recommended, for the people who hate those kind of books as I do, I am telling you it's good and so helpful and practical.

Be Nice and Have courage.🦋❤ 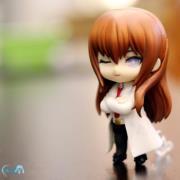 Jen
206 reviews21 followers
September 17, 2010
This book had a lot of good stuff in it. The MOST helpful for me was the section on Assertive vs. Aggressive Communication. I have never seen it laid out so clearly. It gave me a chance to both correct the way I communicate and watch for aggressive communication in others.

I have often been frustrated about the way people talk to me... but I couldn't put my finger on why. I usually settled on there was something wrong with me. Once I read that section, I could point out to myself why it bothered me, and I could choose to share with others if I wanted. It has DRASTICALLY improved my communication with people around me.

"As nice people we have failed to distinguish between being aggressive and being assertive. Seeing the difference between them can free us to tell others what we want. Look at how these two forms of expression differ:

To be aggressive is to dominate people and take away their rightful power.
To be assertive is to express your wants and leave their power intact.

To be aggressive is selfish.
To be assertive expresses a healthy self-love.

We assert ourselves when we respectfully ask something of others that’s appropriate. Rather than aggressively imposing our needs on them and turning them off, our assertiveness makes them feel needed and they find satisfaction in responding.

The freedom to express your desires to others will come only with your decision to live by them. Are you willing to love yourself? Be fully present to those you care about? Assert yourself in a respectful way?

In asserting yourself, whether you want people to stop or start doing something, you need to be positive, specific and direct, rather than negative, indirect, manipulative or moralistic.

Such compelling assertions, because they are clear, honest, and respectful, tend to make others want to give you what you want, desire and deserve. On the other hand, if you’re negative, you create negative responses; if you’re indirect, you burden others with explaining themselves; if you’re manipulative, you make them resentful and resistant; if you’re moralistic, you force them to act out of guilt. Here are examples of healthy assertiveness followed by examples of how unhealthy communications sound:

عموما، انا محتاج لتلك النوعية من الكتب الآن ..
وسأكمل الطريق براءة مزيد من كتب علم النفس في محاولات مستمرة لفهم أفضل وأعمق للنفس البشرية ..
سأظل أحاول ..
Bassel
147 reviews29 followers
November 19, 2020
"لا تكن صلب فتكسر ولا لين فتعصر"
كتاب مهم يوضح الآثار السلبية للزيادة في الاحسان في التعامل مع الآخرين في الأوقات الخاطئة التي تنعكسُ بنتائج عكسية
أعاد نظري في تقييماتٍ خاطئة لأشخاص ضرني زيادةُ إحسانهم فظننته سوءً منهم ومواقف زدتُ الإحسان فيها دون علمٍ بانقلاباته السلبية هذه
Zoe
763 reviews171 followers
April 27, 2017
I cringed reading the first half of the book and especially on the first few "mistakes" because I so see myself in this book. This part of the book resonates strongly with me and gave me an idea of my inner mental workings which have led me often to frustration and anger and I did not know how to express them or help myself. It is so true that I got this in my family education. "Be kind to others", "be humble", "always yield", are ideas so deeply ingrained in me that even today, I hesitate to take the last piece of whatever on the table, even if I really wanted it.

I am very grateful for my parents who have given me everything I need to succeed and function as an useful contributing member of the society. It is up to me to adjust my attitudes, to know that I am my own person and even if my mother may still want me to yield or give others what they need because "I have enough", I may still have to remind myself but I now have the confidence to say no when I want to. I am not responsible for other people's happiness.

The second part of the book became not applicable to me so it didn't make such an impression on the personal level. I could however see how people who are too nice could end up in that situation and need those specific reminders to get themselves out of that black hole.

It is an overall very comforting read. I smiled and felt understood, wondered why I became who I am today and appreciated how far I have come in becoming who I want to be. I wouldn't call it "helpful" or "informative" but it is a self-discovery journey that the writer took which I am myself undertaking therefore my final verdict: a comforting read.
Fadeela
122 reviews50 followers
November 2, 2014
الكتاب موجه إلى فئة معينة من الناس وهم الأشخاص اللطفاء وهم غالباً ما يتضررون من لطفهم الزائد مع الأخرين فإن كنت شخصاً لطيفاً ومنزعجاً من سلوكك مع الآخرين إذن حان وقت التغيير مع قرارك بقراءة هذا الكتاب 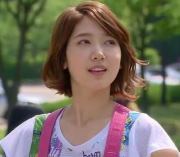 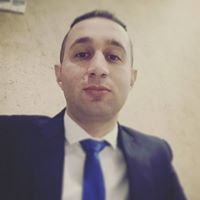