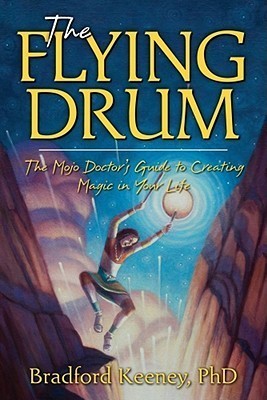 The Flying Drum: The Mojo Doctor's Guide to Creating Magic in Your Life

4.25
12 ratings2 reviews
Rate this book
In "The Flying Drum," author and therapist, Bradford Keeney, presents evidence of real mojo--magical objects and practices from around the globe that have an authenticated history of healing, transformation, and inspiration.

As a modern mojo doctor and therapist, Keeney helps everyday people with real problems by working with the ancient, living mojo in sacred objects. In this book he offers specific prescriptions for taking a journey that introduces a treasure chest of magical experience capable of bringing authentic magic and wonder into everyday life.

Each chapter starts with a story about how the writer received a gift from some spiritual person. He then jumps to an anecdote about how he used that gift to bring 'mojo' or magic into someone's life. This magic exists in the form of proven therapy modalities (e.g., music therapy, doll play, performance magic, words and writing, etc.) but rather than explaining them as such he connects them to shamanic mysticism.

Some of the anecdotal stories come off as ridiculous. In one, he tells a fellow therapist who has become bored to revamp his practice around 'f' words (i.e., words that start with f). Their conversation goes on for pages, and I was left thinking the two men talking must of been high on something.

There's another story where he is in Bali and has a bizarre dream. The description is a textbook example of a hypnogogic hallucination, yet he never calls it that. Given his background, I am sure he knows and this seemed like a great place to bridge science and mysticism, but he didn't.

Still, by the end of the book he redeems himself and writes some things I have long thought are good advice for anyone dealing with depression or an unfulfilled life. He says rather than investing in a shrink, take that money and go out and live your life, take a travel trip, or hire a stand-up comic. The life experiences will create true happy moments that chase the dark feelings away.

So I concluded he is a genius after all, and he is trying to get a message through all the trite ridiculous crap out there that publishers present to us idiot folk. We gotta start somewhere.

Bob
8 reviews
June 23, 2011
Keeney is a therapist who used systems theory and cybernetics and had a national reputation with several publications in the 80's. He was a student of Gregory Bateson and Heinz von Foerster. He has developed a radical approach to therapy which is deeply informed and shaped by shamanism.

If you are interested in this, there is an engaging podcast available that I would recommend with an interview with Keeney by Tami Simon of Sounds True. Here is a link to this podcast: http://www.soundstrue.com/podcast/bra...

"The Flying Drum" book is a fast read. He tells his personal story of his own "professional" development and describes his way he met with shamans from all around the world, received initiations and instructions, and brings what he learned to the world. It is literally fantastic, operating in that domain of what seems unbelievable and yet here in direct experience.

While the book has similarities to New Age books like those of Lynn Andrews, etc., it feels to have more substance and is more grounded in ordinary reality while not shy of stories of the seeming impossible. It is also a bit like Carlos Casteneda's books with many descriptions of encounters and personal experiences but without going into as much of the detail of the stories of his contact with the shamans.

I found this book to be validating and inspiring.
Displaying 1 - 2 of 2 reviews