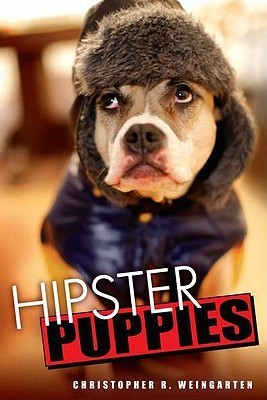 They spend their time sniffing around local farmer's markets, pawing through stacks of vinyl at the record store, and making biting remarks at the caf�. They're hipster puppies-and they're always snarky, impeccably accessorized, and undeniably adorable.

From the site hipsterpuppies.tumblr.com comes never-before-seen photos of these pupsters at play, as well as some of the blog's most popular shots. With their oversized egos-and sunglasses-they run the gamut from music festival fauxhemians to ironic trucker-hat-wearing vegans. And they're guaranteed to melt readers' jaded hearts.

god i hate animals in clothes, i really do. and like Stuff on My Mutt, a lot of this is just dogs wearing glasses or sunglasses. occasionally a scarf. so original.

however - two doggies reading Infinite Jest is more than okay with me.

and while it is true that many of the captions are not funny, you gotta admit "rocko has the most enviable collection of unread chuck klosterman books on the whole dorm floor" is worth a chuckle.

and while this caption is not funny, this dog is the cutest damn thing ever: 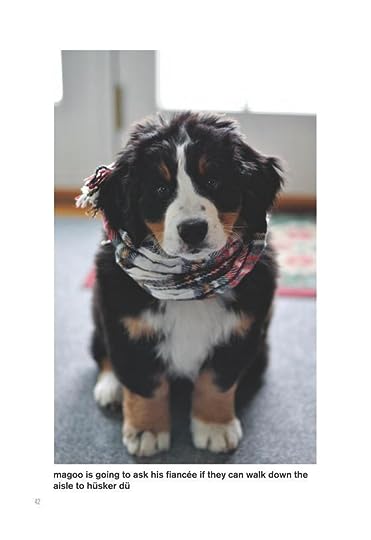 so it gets three stars, mostly because puppies are cute.
although the thought of hipsters putting their expensive sunglasses on their expensive dogs while lounging around in their trust-fund apartments, thinking up new haircuts diminishes my enjoyment.

come to my blog!

Dustin the wind Crazy little brown owl
1,022 reviews139 followers
January 1, 2018
A unique social commentary, specifically regarding Brooklyn, NY but encompassing a wider spectrum as well. This book features photos of dressed up dogs (and one cat that slipped in there)paired with captions that might describe someone you know. You will see lots of pups in glasses, hats, scarves and bandannas. You will see a smaller number of pups with shoes, sweaters, bags, headphones, alcohol, and books. You will see a small fraction of these photos featuring dogs on bikes and skateboards.

Here are some of my favorite parts from the book

From the Introduction aka A Special Message to the People of the Future!:

"Dogs were animals we had domesticated and kept as companions before the recession forced us to use them as food."

"So read this book with an open mind, an open heart and an open wallet. And please remember that hipster puppies are people too."

My favorite captions under the photos (I don't know why the names are not capitalized):


SPECIAL THANKS (at the end of the book)
"This hilarious impulse buy is dedicated to whatever friend or relative gifts it as a last-minute birthday present. My electricity bill is paid with your procrastination and thoughtlessness."

Caitlin
799 reviews33 followers
October 15, 2011
Got this at the book launch event at PowerHouse Arena in Brooklyn, home of hipsters galore. The event was the "Hipster Puppy Pageant" - where some of the dogs actually featured in the book were on parade. The judge was the author, and he signed books after. So, I ended up buying a book that normally would have just made me laugh and move on when I saw it in stores.

It's not much of a read, but the captions and photos are great, and the author's intro is hilarious.

A few of my favorite captions (not as good without the pics, but still...)
"mandy considers herself a francophile because she owns two daft punk records"

"these are jules's "dress chucks"

"scottie's itunes folder is better organized than his life"

"perry could have easily informed the waiter that his order was wrong, but has decided to just write a bad yelp review instead."

"beans could totally be the next dave eggers if he just lived in san francisco, had an interestign background and knew how to write"

"arthur keeps a moleskin notebook... it appears the entirety of his pending novel is 'buy batteries'"

"luna was so excited to be at sundance, she spent 80% of her time texting 'i'm at sundance'"

Dane Cobain
Author 20 books303 followers
May 26, 2016
Hipster Puppies fits alongside books like Elgin Park and Mo’ Urban Dictionary in that it’s a non-fiction book that’s based on a popular internet site. Here, Weingarten collects the funniest photos and captions of Hipster Puppies from the viral blog site, presenting them in full-page spreads that feature a single photo with a single caption.

It’s reasonably amusing, and a fun, quick read – I read it in one sitting on the bus, on my way to work. I wouldn’t go out of your way to get a copy of it, but if you see it around then it’s worth a couple of quid, especially if you like dogs. I know I do! 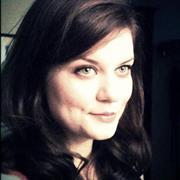 Amanda Schnall
15 reviews
March 19, 2018
Obviously I’m giving it a 5 star review because it’s cute-ass dogs and NOT just because my dog (RIP Topper) is featured in it. Lots of fun, a quick read, and cute pics.
melissa
648 reviews12 followers
August 1, 2017
Cute photos. A quick, fun read/flip through. I'm kinda OK with the fact that I didn't understand some of the references in the photo captions.
Courtney
3 reviews
May 31, 2019
I wish I could give it atleast 7 to 15 more stars. It's that damn good! 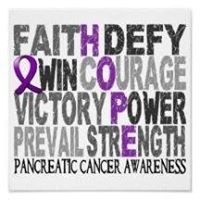 The pups were oh so cute!!!! But the foul language was so incredibly frustrating and so distracting that it really took away from the cuteness of the pictures being displayed and the overall feeling and quality and emotions of me as a reader looking at this piece of artwork in book format. I will never pick up another book by this author or photographer or publisher again…they lost a reader/true fan of the arts in what I had thought was something that was going to be very appealing..but ended up BEING SO VERY VERY APPALLING AND SO RUDE, THAT EVEN KIDDOS WHO LOVE DOGS SHOULD NOT EVEN BE ABLE TO PICK UP THIS BOOK DUE TO THE FOUL MOUTH LANGUAGE. IT JUST WAS DISAPPOINTING AND SO MUCH COULD HAVE BEEN DONE TO NOT GET TO THE POINT TO BE SO OFF-PUTTING AND OFFENSIVE TO SOME PEOPLE LIKE MYSELF.
Carol
1,572 reviews22 followers
August 16, 2011
The reason that I gave this book four stars is that it was just what I needed at the time. I was in the hospital for a six hour operation. I did not need complicated text while in pain, I needed something very simple and heartwarming. A good deal of the pictures had dogs wearing glasses, I am tired of that but I loved the pictures of dogs all bundled up in warm scarves. I think that the pictures were better than the captions so I ended up ignoring most of them.

This book makes an excellent gift for anyone who has surgery coming up. Something soothing and doesn't require a lot of thought. It is the second best thing to having a real pup by your side.

Jeanne
174 reviews2 followers
November 1, 2012
Considering the type of book that it was: funny pictures of dogs dressed up as hipsters with captions, this was pretty good and clever. I even laughed out loud a few times! And...I did find it ironic to find this book in the nonfiction section under puppies in the library! But hey, I guess it's the Truf!

Also, my hubby, would have given it 4 out of 5 stars....so it's possible that I'm being harsh......it's possible...but I'm sticking by my original 3 out of 5 rating.
Jarrett
95 reviews
July 15, 2011
Although the dog on the cover is hipster-ish, most of the dogs inside just have bandanas on or are sitting adjacent to "hip" objects like slr cameras. Not even the snarky comments are that funny (e.g. "Fifi wants to know the sitch with the toilets at the art show because she's on her power cleanse" next to a picture of a dog with a red sweater). Meh.
Jenna
148 reviews5 followers
March 7, 2012
I loved the Hipster Puppies website when it first came out... and was super excited when the coffee table book became a reality! I think this is simply hilarious. Cute dogs, witty sayings, and hipster-bashing make this funny little coffee table book worth reading.
Erin
2,099 reviews27 followers
July 7, 2011
C'mon. It's my favorite thing (puppies) making fun of my least favorite thing (hipsters).
Brooke
85 reviews1 follower
August 14, 2011
Ridiculous. And so entertaining.
Judith
1,354 reviews30 followers
September 12, 2011
Who doesn't love puppies? And especially puppies making fun of hipsters?

Mati
987 reviews1 follower
August 6, 2012
PETA on the author. What are those activist doing when poor animals are dressed up in such horrid manner squeezed in "funny" clothes for some demented fun. Seriously poor animals.

Megalion
1,479 reviews46 followers
April 1, 2016
I confess that I wasn't clear on hipster culture. The dogs were cute but the rest was boring.