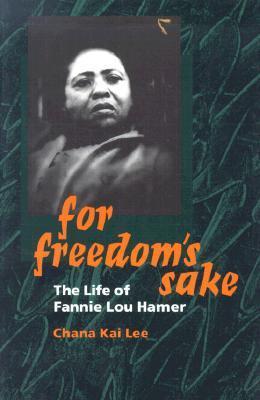 For Freedom's Sake: The Life of Fannie Lou Hamer

4.18
226 ratings15 reviews
Rate this book
The powerful story of Fannie Lou Hamer, who grew up among "the poorest of the poor" in rural Mississippi and became a national figure in the civil rights movement in the 1960s.

Professor Lee teaches the history of the Civil Rights Movement, the history of Georgia, twentieth-century U.S. social history and an introductory course on contemporary issues in African American life and culture. She has served as film consultant on several projects including the critically acclaimed PBS documentary, Citizen King, produced by award-winning director Orlando Bagwell. She has presented numerous conference papers and chaired several panels at conferences organized by various associations, including the Association for the Study of African American Life and History, the American Society for Legal History, the Southern Historical Association, the National Women’s Studies Association, the Berkshire Conference on the History of Women, the Organization of American Historians, and the American Historical Association. She serves on the editorial board of the journal Gender, Women and Families of Color.

Hamer was the youngest of 20 children in a sharecropper family who had no more than a 6th grade education who went on to be a civil rights advocate and champion for the poor in Mississippi. She was beaten by police in retaliation for her work to sign black folks in Mississippi up to vote, to the point that she lost most of her vision in one eye and had kidney problems for the rest of her life.

I like that the book puts Hamer's civil rights work in context, explaining why she worked with a feminist group despite having some differences, how she worked to get black folks registered and represented in their legislature, and how her work around union organizing and providing homes and jobs for poor black folks in Mississippi was all of one piece with her civil rights work.

I did feel the writing was a bit dry, and I wish there'd been a bit more about her personal life. For instance, you know early on that she adopted two girls but you don't really hear much about them until they're both grown. You also find out that her sister-in-laws really loved her and sent her notes of encouragement when she was sick in her later years, but you don't really learn much about her family life after her marriage to Perry "Pap" Hamer.

Overall, though, this was a good read and quite thoroughly covers her activist years. Recommended.

Samantha Hines
Author 7 books12 followers
October 17, 2018
Absolutely inspirational and shockingly relevant.
Abiola
87 reviews
July 3, 2020
I wasn’t family with Fannie Lou Hammer before reading this book but I’m so glad I did. This historic text covers the life and trails of a trail blazing southern activist. What I love most about this text is that it doesn’t overlook the loss or pain of this strong black women but goes to show that she is strong even in her pain.

This is a historic text so expect names and figures but the life of Mrs. Hamer is so exceptional that it’s worth it! An exceptional biography, would recommend!
Jessica
475 reviews9 followers
March 3, 2008
Hamer's life is fascinating and the book does a good job tracing the beginning of her activism and the changes she was able to bring about. A great figure to know about, especially in regards to civil rights.
Bridget
61 reviews
February 10, 2008
A decently written history of a really interesting figure often left out of history books.

Cherisse
37 reviews46 followers
Read
September 5, 2008
Moving and powerful.
Tia
54 reviews2 followers
March 11, 2014
An attempt to cover the public and personal sphere's of an incredible individual. A bit uneven, but very good.
Kevin
Author 20 books27 followers
August 4, 2019
A history of the life and work of civil rights activist Fannie Lou Hamer. There's nothing especially astounding about the biography—it's a fairly standard chronological retelling—though it does explore some of the pain and failure in Hamer's life. For all the work Hamer did, there were few successes. She ran for political office and lost every time, organizations she founded crumbled, and she ended her days battling sickness and depression. Sometimes it's too easy to gloss over the life of activists like Hamer and spin a narrative that they made a stand and justice prevailed and things were better. There was no dramatic victory for Hamer.
Peyton
1,469 reviews16 followers
April 20, 2021
I didn't know much about Fannie Lou Hamer at all before reading this book, and this was a great introduction to her life and work. From sharecropper to powerful advocate for voting equality, she never lost sight of the poor Black people in Mississippi she most wanted to serve. The Winona beating from the white cops was particularly brutal but necessary to read. 4.5 stars.

Pablo Uribe
38 reviews6 followers
December 31, 2018
Compelling account of a powerful and inspiring life. Favorite chapters were in the lead up to MDFP (Mississipi Democratic Freedom Party) challenge at 1964 DNC (ch 5) and about Freedom Farm co-op work following deterioration of her relationship with SNCC (ch 8) the whole thing is brilliant though
Co Ffee
1 review
July 17, 2018
Excited to read this
Elizabeth
9,019 reviews1 follower
Want to read
June 18, 2022
1
(a)lyss(a)
2,766 reviews254 followers
March 19, 2016
"Fannie Lou noticed 'the people that wasn't working, which was the white folks, they had food and they had clothes and everything'."

This book is a wonderfully in depth look at the life of Ms. Hamer.

I learned about this book through 'This Little Light Of Mine' by Kay Mills - it was described as a book about Hamer from the perspective of a woman of color so I wanted to learn more.

This book dives into the true injustices faced by people of color not all that long ago. From being beat and mistreated, being prevented from voting, being sterilized without cause, being tricked into working endlessly picking cotton for pennies a day, this is a thorough look at life under Jim Crow. It also details what an incredible woman Ms. Hamer truly was. By standing up to what she knew to be injustice she blazed the trail for so many woman to follow. And she didn't just talk - this book also dives into the Freedom Farm project and how Ms. Hamer and her supporters brought together a community that was being neglected by the laws that were supposed to protect them.

Harrowing and informative this book should be a part of history curriculum everywhere.
Doris Raines
Author 2 books30 followers
April 7, 2016
I. Love. This. Story.

Anastasia
1,195 reviews
Want to read
April 23, 2017
Putting this back on my to-read shelf, as I can no longer renew it at the library. I got to page 89. It's interesting but it's very dense and reads like history, so it's tough to read more than a few page at a time. I will hopefully pick this up again later or perhaps will read about Hamer from another author.
Displaying 1 - 15 of 15 reviews