Goodreads helps you keep track of books you want to read.
Start by marking “The Lawnmower Man: Stories from Night Shift” as Want to Read: 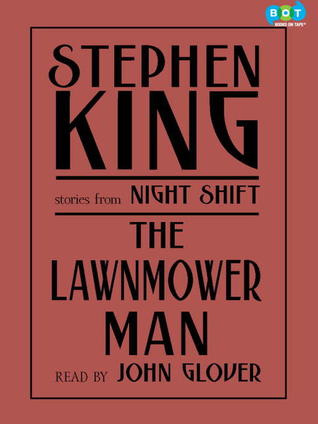 We’d love your help. Let us know what’s wrong with this preview of The Lawnmower Man by Stephen King.

Contains "The Lawnmower Man," "The Ledge," "Sometimes They Come Back," "Quitters, Inc.," and "The Mangler."

Start your review of The Lawnmower Man: Stories from Night Shift

Aug 21, 2015 Sandy *The world could end while I was reading and I would never notice* rated it really liked it  ·  review of another edition
Shelves: 4-star, audio, short-stories
John Glover makes a great job of narrating these four unsettling tales from the pen of Stephen King.

So much so that I have just downloaded The Graveyard Shift.

If you're a King fan, I can highly recommend these short stories. After the last, you may never want to do laundry again......

Jan 19, 2015 Jessica Draewell rated it really liked it
I started to say, "What the hell did I just read?!" Then decided on, "Oh yeah, It's Stephen Fing King!"

Jan 08, 2019 keving chaupiz rated it really liked it
I thought dabbling in the Black Arts would be good for a chuckle, how wrong I was. I should have never read that book.

Apr 11, 2019 Shabbeer Hassan rated it liked it
Shelves: horror, murica, 2019
A decent collection of macabre from King's stable, with a rather top-notch narration from JohnGlover. Personal favourites - "The Ledge" and "Quitters, Inc."

Jul 15, 2013 Gary Phelps rated it it was amazing
Really creepy. NOTE: This story has absolutely nothing to do with the movie; King had to sue to get his name taken off the title.

May 29, 2015 Tamera rated it really liked it
Creepy as hell, so yeah Stephen King.

Nov 07, 2014 Markeisha rated it did not like it
Shelves: horror
Eating grass....and that's supposed to be scary!? BOOO!!

Sep 20, 2019 Laramie Gildon rated it liked it  ·  review of another edition
These were good little short stories. Some better than others but overall enjoyable. I’ve got to drop this to 3 stars, because others that I’ve ranked at 4 or 5 stars I cannot put these on the same level. I hate to do it to King, but I’ve got to. Worth listening to, but not quite at the level of the others. I could definitely see these being made into full length movies or series based on the plots though.

Jan 13, 2019 Simon rated it really liked it  ·  review of another edition
Shelves: short-stories
Honestly, I have been enjoying a lot of these stories far more than I would have thought. Being an older reader probably makes for that being part of the case if anything. There is a whole mix of circumstances in all of these short stories and I have enjoyed the delivery of them with musical aspects and even the odd sound effect.

May 06, 2017 Brian Holmes rated it liked it
Quite a "Creepshow" Feel about this one.

I quite like king but this is quite a bizarre set of stories ranging from great to "What the heck was that?"
"Quit Inc" was superb but the others were very mediocre.

I would put this in the loo library. It isn't something that will engross you but worth a read if just spending a few minutes a time reading it.

read as part of the collection night shift, most probably back in 2008, after 22april.

Jun 10, 2018 Joe rated it really liked it
This edition beautifully read by the always-illuminating John Glover.

Jan 27, 2020 Daniel Guglielmo rated it really liked it
This is my start into reading more (preferably horror) short stories. Creepy but not riveting.

Feb 11, 2020 Michael rated it really liked it
Some of these short stories were pretty cool. I enjoyed getting through them.

Jun 18, 2019 Andrew rated it really liked it
Shelves: audiobook
Five short stories, lawnmower man is WAY shorter than I expected, loved them all, wasn't crazy about The Mangler.

Sep 16, 2016 Scott Cook rated it really liked it  ·  review of another edition
Loved it! I might have read this when I was much younger and I recognized some of the story's from the movie "The Cat's Eye" but my favorite short story of the bunch and the one I thought was the creepiest and also the one I'd never even heard of before was called "The Mangler" about a machine that gets possessed. King seems to have a fascination with devil machines...

Jul 09, 2016 Adam rated it liked it  ·  review of another edition
Shelves: magical, stephen-king, humor, horror, adventure, pop-culture, retro, modern-classics, favorite-authors, iconic-characters
I listened to this audiobook while I was driving on vacation and really enjoyed it.

The Lawnmower Man was my favorite short story in the collection. The story was very campy and enjoyable. It's nothing like the movie adaption. I would love to see King revisit Pastoral Greenery Lawn Care at some point. 3.5*

Sometimes They Come Back was the second best story of the collection. I really wish that King would have made this a novel. There is a lot more potential in with the story and plenty of more I listened to this audiobook while I was driving on vacation and really enjoyed it.

The Lawnmower Man was my favorite short story in the collection. The story was very campy and enjoyable. It's nothing like the movie adaption. I would love to see King revisit Pastoral Greenery Lawn Care at some point. 3.5*

Sometimes They Come Back was the second best story of the collection. I really wish that King would have made this a novel. There is a lot more potential in with the story and plenty of more plot to explore. 3.5*

Quitters, Inc. is such a cool idea. I love the idea of a secret origination that people pay to watch over them who punishes their loved ones if they mess up. It's crazy! The premise of Quitters, Inc. is one of the most frightening that I've ever read. 3.5*

The Ledge is a cliché revenge/mob-esque story with a twist. It's still enjoyable because it's well written. 3*

The Mangler is quite the mess. It's about a possessed laundry machine. While possessed machinery is vintage Stephen King, I didn't enjoy this story as much as I have many of King's others of the same ilk. Again, it's nothing like its movie adaptation. 2*

Overall, this was a very enjoyable collection. It made the drive from Georgia to Kentucky fly by.

Oct 31, 2014 Matt Smith rated it liked it
Shelves: school-novels
I liked the build at the beginning, However, the Lawnmower man himself was just plain amusing! The part I disliked most was the almost non-sequitor of the attack on the protagonist: it seems everything is copesetic, between the two, but then all of a sudden, it's not. It seems that the phone call tipped off the Lawnmower Man, but he was talking about a sacrifice earlier, and indeed take a sacrifice, but I don't know. It seemed too off for me.

Mar 02, 2016 Alishia rated it it was amazing
This was my my favorite collection so far. The stories created a range of emotion...during lawnmower man I laughed and during quitters Inc I was on the edge of my seat. I love Stephen King, and this is a great collection for anyone whose just getting started with him and doesn't want to commit to a 1000 page book, but still satisfy the hard core fans.

May 14, 2015 Alisia rated it it was ok
Shelves: stephen-king
The 2 star rating is strictly for the short story The Lawnmower Man. I am rating and counting each short story in this book individually.

The Lawnmower Man was very creative but silly. It was just ok to me.

Aug 04, 2013 David Ronan rated it liked it
The story was alright but a little bit disappointing considering I was expecting a fair bit from the book.
« previous 1 2 next »

Stephen attended the grammar school in Durham and Lisbon Falls High School, graduating in 1966. From his sophomore year at the University of Maine at Orono, he wrote a weekly column for the school newspaper, THE MAINE CAMPUS. He was also active in student politics, serving as a member of the Student Senate. He came to support the anti-war movement on the Orono campus, arriving at his stance from a conservative view that the war in Vietnam was unconstitutional. He graduated in 1970, with a B.A. in English and qualified to teach on the high school level. A draft board examination immediately post-graduation found him 4-F on grounds of high blood pressure, limited vision, flat feet, and punctured eardrums.

He met Tabitha Spruce in the stacks of the Fogler Library at the University, where they both worked as students; they married in January of 1971. As Stephen was unable to find placement as a teacher immediately, the Kings lived on his earnings as a laborer at an industrial laundry, and her student loan and savings, with an occasional boost from a short story sale to men's magazines.

Stephen made his first professional short story sale ("The Glass Floor") to Startling Mystery Stories in 1967. Throughout the early years of his marriage, he continued to sell stories to men's magazines. Many were gathered into the Night Shift collection or appeared in other anthologies.

In the fall of 1971, Stephen began teaching English at Hampden Academy, the public high school in Hampden, Maine. Writing in the evenings and on the weekends, he continued to produce short stories and to work on novels. ...more

Trivia About The Lawnmower Man...