Your Literary Guide to the Solar Eclipse 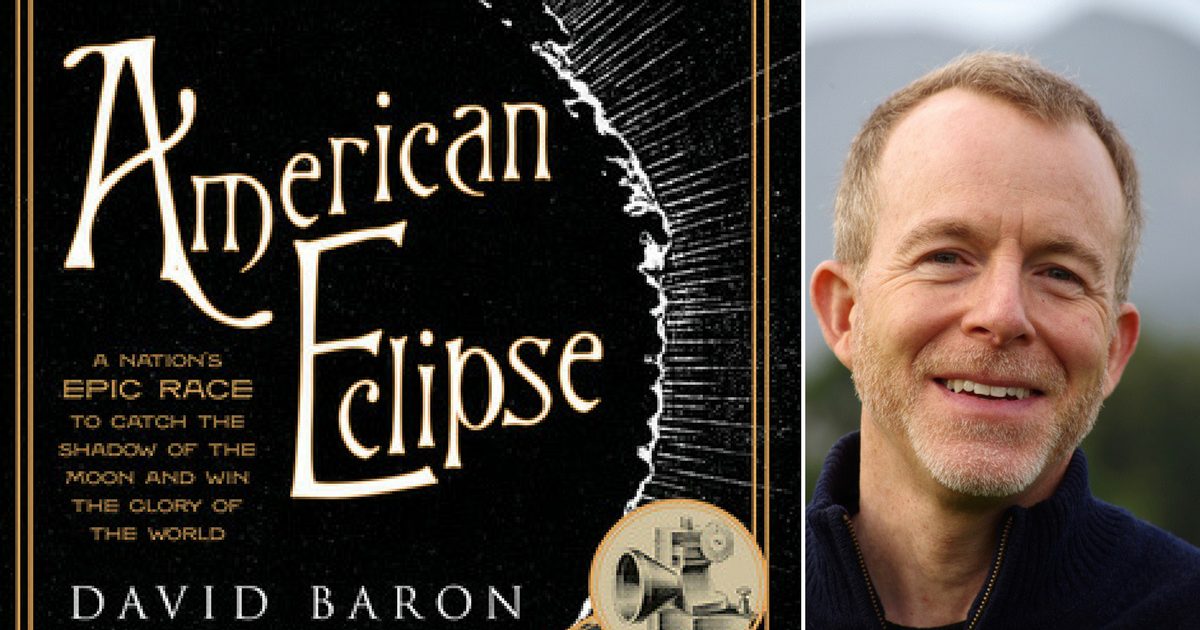 David Baron's new nonfiction work, American Eclipse: A Nation's Epic Race to Catch the Shadow of the Moon and Win the Glory of the World, chronicles how three scientists raced to study the rare solar eclipse of 1878 as it darkened America's wild west. Baron is a journalist, author, and broadcaster who has worked as an environment reporter for NPR. In preparation for the first total solar eclipse to cross the United States from coast to coast in 99 years, Baron wrote this literary guide to the celestial event: 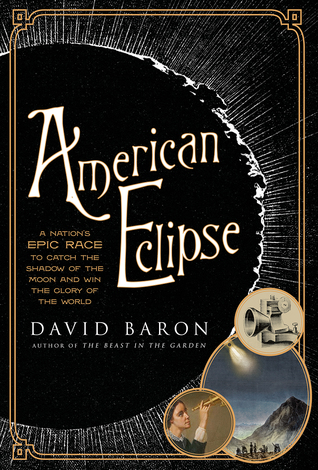 Error rating book. Refresh and try again.
Rate this book
Clear rating
1 of 5 stars2 of 5 stars3 of 5 stars4 of 5 stars5 of 5 stars
When a total solar eclipse—like the one that will cross the United States this August 21—darkened skies above the American West on July 29, 1878, astronomer Samuel Pierpont Langley found himself at a loss for words. "I once experienced an earthquake, and I think this and a total eclipse of the sun are two things that it is no use trying to describe," he explained in a letter to his family. "[Y]ou must feel or see for yourself."

I have had the good fortune of witnessing five total solar eclipses in various parts of the globe. I can attest that they are unlike anything else in the realm of human experience and are impossible to capture fully in words. While writing American Eclipse, however, I did not have the luxury of simply calling the spectacle "indescribable." My charge was to bring the experience to life on the page, and I became fascinated with how others have attempted this daunting feat.

My favorite modern description of a total eclipse comes from the brilliant Annie Dillard. "The sky snapped over the sun like a lens cover. The hatch in the brain slammed," she wrote of the sudden extinguishment of daylight that she observed near Yakima, Washington, in 1979. (Her essay "Total Eclipse" appears in the collection Teaching a Stone to Talk.) "The eyes dried, the arteries drained, the lungs hushed. There was no world. We were the world's dead people rotating and orbiting around and around, embedded in the planet's crust, while the earth rolled down."

Yes, the language is surreal, but that is precisely how one feels—perplexed, disoriented, off-kilter—when the sun disappears.

Almost two centuries earlier, another great writer—the American novelist James Fenimore Cooper (author of The Last of the Mohicans)—witnessed a total eclipse in upstate New York. He was a youth and wrote up his memories much later, in an essay published posthumously (in Putnam's Magazine, September 1869). Although Cooper's prose is of a different era—infused with overt religiosity—he, like Dillard, describes the bewilderment and deep emotion evoked by the sight. "It seemed as if the great Father of the Universe had visibly, and almost palpably, veiled his face in wrath," he recalled. Cooper remembered feeling a profound sense of awe—"a clearer view than I had ever yet had of the majesty of the Almighty, accompanied with a humiliating, and, I trust, a profitable sense of my own utter insignificance."

Science can explain the mechanics of a total eclipse, but it requires the sensibility of a poet to convey how the human mind perceives the experience. Perhaps no one was better suited to the task than Mabel Loomis Todd. Remembered today as Emily Dickinson's editor, who engaged in a scandalous affair with the reclusive poet's brother (see the book Austin and Mabel), Todd was married to an astronomy professor at Amherst College and witnessed a total eclipse on the Japanese coast in 1896. "Grayer and grayer grew the day, narrower and narrower the crescent of shining light. The sea faded to leaden nothingness," Todd wrote in Corona and Coronet. "Well might it have been a prelude to the shriveling and disappearance of the whole world,—weird to horror, and beautiful to heartbreak, heaven and hell in the same sky."

On August 21 millions of Americans will witness this same ineffable sight. They will find themselves with a new understanding of the immensity of the universe—and the inadequacy of language.

David Baron's new book, American Eclipse: A Nation's Epic Race to Catch the Shadow of the Moon and Win the Glory of the World, hit bookshelves in June. On August 21 Baron will be in Jackson Hole, Wyoming, to witness the eclipse. Add his book to your Want to Read shelf here.

Check out more recent blogs:
August's Best Books of the Month
Exclusive Excerpt: Leigh Bardugo's 'The Language of Thorns'
6 Tips for Teachers to Use Goodreads in the Classroom

Fascinating article.
Have just added the book to my ever increasing TBR list.

I saw a total solar eclipse in the early 70's from a NYC apt. A perfect view over the Hudson River. I still can feel the excitement in each of us. Although I will only see part of this one - the same feeling exists. DO oyu ever wonder if anyone out there sees anything from their POV. In the whole universe?

I almost didn't read this, thinking it was yet someone else cashing in on the acting like this is the only eclipse that ever will or has happened. (And in true American fashion, price gauging anything and everything they can even remotely associate with it.) Glad I did read it because it looks like an interesting book. Adding it to me to-read list.

Social media is why we are all frothing at the mouth. This has been part of the cosmos forever.

Everyone in our family is getting ready for the eclipse. We should have had this book earlier!!

I thought it was very interesting. I bought a copy after hearing the author speak at our local library. A lot of local history in that one, was interesting.

Another good option is Totality - The Great American Eclipses of 2017 and 2024 by Mark Littman.

Thanks for the input - we will all witness a great event - partial or total.

Hmmm... well, I live right dead nuts under the center of the (fabled and legendary) "Path of Totality", so now every supposed friend and so-called Relative that I never heard of, suddenly has discovered their undying friendship with me that I never knew existed.

Which is OK, since it stokes my already insufferable sense of self-importance... But I'm having trouble getting all hot and bothered over the eclipse itself, because I already survived one such event back in the 1980's, and it was rather uneventful... the sky was cloudy, it got dark in the middle of the day, and one of my cats barfed.

But other than that... I'm actually hoping the predicted apocalypse of Commufornians causing the Mother of All Wrecks on the highways coupled with total gas shortage and Etc. - a survivalist's wet dream - comes to pass. Now *that* would be entertaining...

The woodwork oozes with new old friends. I too have seen one and II was dazzled but it was 'then' and was a personal thing except at the Museum of Natural History in NYC. And if this is coming of the end - then it comes with a corona light - not with a bang or a whimper.

I have never experienced a total solar eclipse but this article gives a fairly good idea of what it may feel like. The book goes to the top of my TBR list :)

Duane wrote: "Hmmm... well, I live right dead nuts under the center of the (fabled and legendary) "Path of Totality", so now every supposed friend and so-called Relative that I never heard of, suddenly has disco..."

Doesn't surprise me. There are reports of astronomers, pro and amateur, who booked rooms as much as two rooms ago just to have the hotels call them in the last few weeks and say that the computer "lost" their reservation and they must rebook...at ten, twenty or more times the original price. Now, if I were in path of totality, I'd certainly considering putting every sleeping surface in the house up on AirBnB, but I can't see gouging people just because one can.

I've seen more than a couple eclipses. I've always been fascinated by astronomy, so I enjoy them. Still, it's not going to live up to the hype for a lot of people. Considering the hoopla that happens every time there's a so-called "supermoon" and with this eclipse, I figure the build-up for Halley's Comet should be starting any day now and be a religious cult by the end of the next decade. By then, we'll probably have social media blasted directly into our skulls. .~

Nothing is simple or ordinary since social media found a way to blow everything into an event. Even events are no longer just events. And ordinary, fleeting info is not simply that - it has much larger implications. So the lack of discovering anything and savoring it - on one's own - is dimishing daily. This is why I read read books still. There are always things to discover and savor - very quietly. I think many believe social media is the age of miracles and wonders - I think having a foot in both ages is far more fascinating. And ythis is why I read all the time.

Mar. 7, 1970 - a total solar eclipse visible in New York City. Black Panthers had been arrested in connection with the fatal shooting of Fred Hampton, Jr. on Dec. 4, 1969. In Central Park, at a demonstration the chant went up that day of the eclipse - "Free the Panther 21, or we won't give back the sun!"

In the path of totality. I have seen eclipses before, not sure if they were total or not.

The book sounds interesting. Added to my TBR.

I know where I watched in NYC - but it seems as if if there must have been one in 1971 as well.

Duane wrote: "Hmmm... well, I live right dead nuts under the center of the (fabled and legendary) "Path of Totality", so now every supposed friend and so-called Relative that I never heard of, suddenly has disco..."

Don’t you often hate "social media"? Everyone knows everyday damn thing and no one ever thinks before they land fully ready to include you. At your expense. I I am below the "prime path" but I know folks driving to "visit" relatives in COrvallis". That's a long drive. About 1 decade ago I watched so many lunars in Los Angeles and no one was out at 3 in the morning except a few souls Light pollution is a concern - but I still loved it. Now it's today's news today. Takes the fun away.

Best comment for sure. Another revenue stream we did not even have to create.