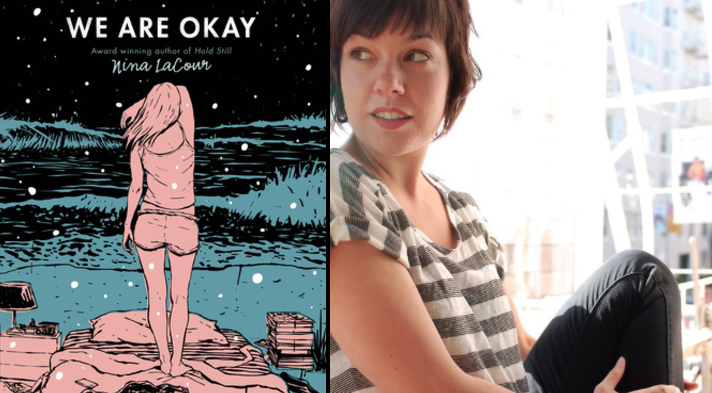 Nina LaCour is the bestselling author of the young adult novels Hold Still and Everything Leads to You. Her latest work is We Are Okay. In honor of June's Pride Month, Goodreads asked LaCour to share some of her favorite LGBT reading and why these books are important to her:

Error rating book. Refresh and try again.
Rate this book
Clear rating
1 of 5 stars2 of 5 stars3 of 5 stars4 of 5 stars5 of 5 stars
I fell in love with another girl when I was nineteen. Before that, I had only dated boys, so for the first time I had trouble finding stories that reflected my newfound identity. Falling in love is falling in love. It makes you soar; it makes you hurt. Sometimes it’s unrequited and sometimes you get lucky, and the person you love loves you in return. But in spite of love’s universality, when I found myself rather unexpectedly in love with a girl, I wanted to see that specific experience reflected back at me.

Finally, I found a book—Oranges Are Not the Only Fruit by Jeanette Winterson—and I read it voraciously. It wasn’t categorized as YA, but it was about a teenage girl who had to deal with her parents and her sexuality. It was everything I wanted to find in a book. Oranges felt like a gift, and I’m happy to say that in our current era of great YA literature, the gifts are abundant.

So in honor of Pride month, whether you’re queer or straight, cis or trans, young or old, here are some gifts for you.

If you like some magic in your stories, try When the Moon Was Ours by Anna-Marie McLemore and Labyrinth Lost by Zoraida Córdova.

Sci-fi more your thing? Check out Proxy by Alex London and Adaptation by Malinda Lo.

Searching for portrayals where queer teens and religion intersect? Get yourself a copy of Georgia Peaches and Other Forbidden Fruit by Jaye Robin Brown; The Miseducation of Cameron Post by Emily M. Danforth; and The Porcupine of Truth by Bill Konigsberg; and Our Own Private Universe by Robin Talley.

Want something to make you sob? Try History is All You Left Me by Adam Silvera—and then cheer yourself up with David Levithan’s Boy Meets Boy or Under the Lights by Dahlia Adler.

How about first love and coming out? So many great ones to choose from! Honor Girl by Maggie Thrash; Tell Me Again How a Crush Should Feel by Sara Farizan; Simon vs. the Homo Sapiens Agenda by Becky Albertali; Aristotle and Dante Discover the Secrets of the Universe by Bejanmin Alire Saenz; I’ll Give You the Sun by Jandy Nelson; If I Was Your Girl by Meredith Russo…(As I said—so many. I could go on and on!)

Nina LaCour's We Are Okay is out now. Add it to your Want to Read shelf here.

Have a great LGBT novel to recommend? Share it in the comments!

We Are Okay is SO! GOOD!

Oranges are not the only Fruit, is amazing. I love the sentence near the end when she's talking about not being able to go home because people remember who you used to be, not who you are. I read it whilst in school and it's stuck with me through the years. :-)

I'd like to add Beast by Brie Spangler as another wonderful book to read!

I'd like to add Looking for Group by Rory Harrison to get some trans representation in here. Also it was a lovely YA book that I devoured in one sitting.

Ash by; Malinda Lo and Of Fire and Stars by: Audrey Coulthurst

I'd love to add 27 Hours by Tristina Wright as a YA sci-fi book that isn't out yet, but is getting a lot of buzz. I mean, even Meredith Russo blurbbed it!

Also, should mention Island of Exiles by Erica Cameron, which is a YA fantasy about a world where bisexuality is the default and there are characters who are intersex and asexual as well.

How about Rita Mae Brown's Six of One? It is one of the few books that I've read twice!

I absolutely adore Nina LaCour and her writing - it's just beautiful. We Are Okay is on my favourites shelf!

She's so incredibly eloquent, and her stories are important, and really touch your soul.

Thank you for the recommendations, Nina! I'll get reading.

Melissa (YA Book Shelf) wrote: "I'd love to add 27 Hours by Tristina Wright as a YA sci-fi book that isn't out yet, but is getting a lot of buzz. I mean, even Meredith Russo blurbbed it!

Also, should mention Island of Exiles by ..."

This is already on my need to read list!!! Can't wait.

Chelsey wrote: "Ash by; Malinda Lo and Of Fire and Stars by: Audrey Coulthurst"

Thanks for this and of course Nina LaCour is a great writer. I would love to add two books which are old, but great. "Annie On My Mind" and "Keeping You A Secret". Also a not so old one is "The Gravity Between Us". All three very good books!

You should add Symptoms of Being Human by Jeff Garvin, it's amazing. Also for some historical LGBTQ books, Lies We Tell Ourselves by Robin Talley and And I Darken by Kiersten White. They're both amazing too.

For me, Ash by Malinda Lo came to me when I needed it most so it has a special place in my heart. Also, I love Siera Maley's books.

Yes! Proxy is a AMAZING book. I had been wanting something like it for so long and when I finally found it I fell in love <3
And Honor Girl: A Graphic Memoir holds a very special place in my heart as well.

Annie On My Mind

A new one I loved was Sympathy. I enjoyed The Price of Salt as well.

Zami: A New Spelling of My Name

Honestly one of the most beautiful books I've ever read, and something that's so important in queer history. Highly, highly recommend.

I'd add At Swim, Two Boys as Joycean literary fiction that shines Joyce-like psychological acumen into the lives of three young gay men in the time leading to the Easter Uprising.

For a deep, often painful but always very honest depiction of being gay in a Somali-American family, I highly recommend A Love Like Blood,

What a great list of recommendations. I haven't read all of them so I am definitely going to look into a great many of the above.

A Necessary Hunger by Nina Revoyr!

Thanks for the list! I really wish it had included thrillers/mystery/crime, though. Somehow I've never had anyone tell me about that kind of book with an LGBT+ protagonist. Why is that?

(I'd write one if I had the talent, but oh well)

Here is a list of mysteries with GBT protagonists:

You should check out

C.B. Archer if you like sexy stories in a world of gaming. My favourite so far is All Men’s Space – In Space!: Bufik Lanet’s Tale.

Superbambi wrote: "Thanks for the list! I really wish it had included thrillers/mystery/crime, though. Somehow I've never had anyone tell me about that kind of book with an LGBT+ protagonist. Why is that?

Last Seen Leaving by Caleb Roehrig is a YA mystery, where the narrator's (who's in the process of coming out as gay to even himself) girlfriend goes missing. I'm not big into thrillers or mystery, so I don't know the genre well, but I enjoyed it.

Look Past by Eric Devine (also YA) will get some trans representation in here, but it's a little terrifying. After the murder of his best friend, the narrator starts receiving anonymous hate messages, requesting that he 'repent' and start living as a girl.

And for more of a thriller, As I Descended by Robin Talley (also YA) is a queer retelling of Macbeth set in a prestigious boarding school.

Also, Lambda Literary has awards for gay/lesbian mystery, so looking into previous nominees and winners would probably be a good place to look as well.

Jeanette Winterson's Written on the Body is perfect. I also highly recommend The Song of Achilles and The Dark Wife. <3

An oldie but goodie that examines the whole way we view sexuality is Ursula LeGuin's The Left Hand of Darkness, set on a planet where everyone is a hermaphrodite and being single-gendered is considered freakish.

Carry On by Rainbow Rowell is a great one.

Superbambi wrote: "Thanks for the list! I really wish it had included thrillers/mystery/crime, though. Somehow I've never had anyone tell me about that kind of book with an LGBT+ protagonist. Why is that?

Anything by Josh Lanyon (the Agatha Christie of the LGBTQ+ mystery romance world!) or I can also recommend Bitter Legacy by Dal Maclean

I just read I’ll Give You The Sun and Simon vs the Homo Sapiens Agenda is on my to-read list!

Hey, this is kind of funny that this was the free book I picked up at the library and I'm totally looking forward to reading it on a roadtrip!

I love I'll give you the sun and Aristotle and Dante discover the secrets of the universe! Some of my favourite series also feature gay relationships: The Raven Boys by Maggie Stiefvater and All For The Game by Nora Sakavic
I also recently read "Silent" by Sara Alva, and it's absolutely beautiful! It is a really unknown book which not only deals with coming to terms with your sexuality, but also focuses on difficult family situations and foster care, and it features a mute character, which in my opinion is very interesting since you don't really know "his side of the story". If you read it I'd love to talk about it (or any of these other books), so write me a message ;)

Superbambi wrote: "Thanks for the list! I really wish it had included thrillers/mystery/crime, though. Somehow I've never had anyone tell me about that kind of book with an LGBT+ protagonist. Why is that?"

If you're okay with YA books (and mention of drug addiction), I enjoyed reading Far From You by Tess Sharpe - a murder mystery with a bisexual female protagonist.

Also the urban fantasy series "Magic Ex Libris" by Jim C Hines, it's amazing! It's YA.

I loved Everything Leads To You and We Are Okay is on my Top TBR!
Also...The Miseducation of Cameron Post is on my TBR as well!

I just finished When We Rise: My Life in the Movement and highly recommend it!

Her Name in the Sky by Kelly Quindlen.

I'll be screaming about this book until it makes it onto lists like this.

Caitlin wrote: "I'd like to add Looking for Group by Rory Harrison to get some trans representation in here. Also it was a lovely YA book that I devoured in one sitting."

Well then you're lucky it's a (mostly) free world where you can read whatever you'd like & keep your hatred to yourself.

I'd like to add Keeping You a Secret by Julie Anne Peters. I can't keep that one on my classroom shelf.

I really enjoyed Georgia, Peaches & Other Forbidden Fruit and Ari and Dante. I loved Simon vs. too - but especially loved its sequel Leah on the Offbeat - bi rep!

Also would really recommend Autoboyography - another one addressing sexuality X religion, and I feel like this book is underrated.