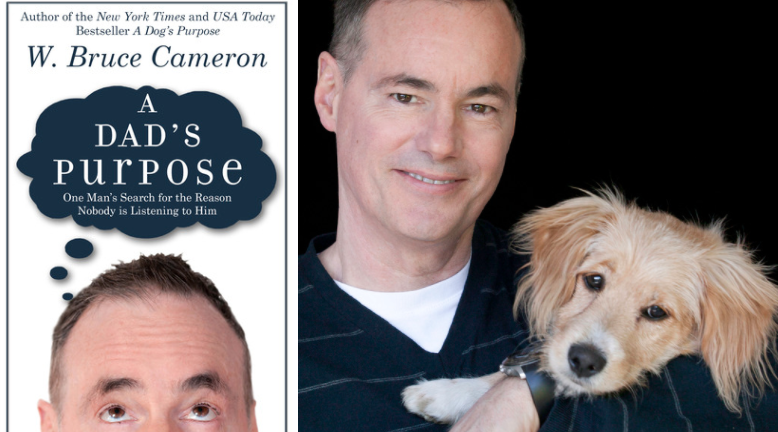 W. Bruce Cameron is the bestselling author of A Dog's Purpose and 8 Simple Rules for Dating My Teenage Daughter. In his latest work, A Dad's Purpose: One Man's Search for the Reason Nobody is Listening to Him, Cameron focuses on his favorite role: Dad. For this Father's Day, Goodreads asked Cameron to share his thoughts on being a son, father, and imagining the good life of someday being a grandfather:

When I was a teenaged boy, I asked my father if there was anything he wished he had inherited from his parents. He replied, "infertility."

At the time I wasn't precisely sure what he meant, but that was because I couldn't smell myself. I also felt I had won the last debate we'd had, which was something like, "Resolved: I'm sixteen and deserve to drive a sports car." I was confident I'd won all of my debates with him.

"Resolved: Grades are not that important because your generation has ruined the planet anyway." 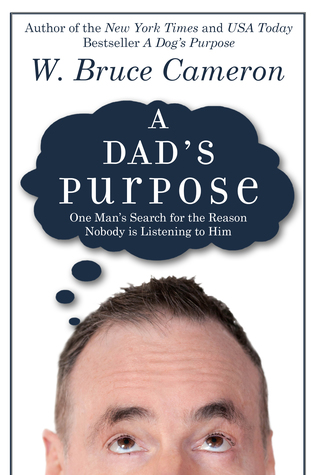 "Resolved: The second I turn eighteen I am getting my own apartment and moving out of here."

(Oddly, when it came to this last debate, I actually did win, with my father telling me he "couldn't wait for the day." Though when I actually turned eighteen I didn't move anywhere.)

It wasn't until my own son entered the painful, venomous period known as puberty that I fully grasped what my father had been trying to tell me.

"Oh my God," I cried in realization, "I was such a jerk to my father!"

Never mind the paradoxical point that by the time you're having conversations with your son about such things as "body spray is no substitute for a shower especially after six days" it's a little late to be wishing for a case of infertility. I'm simply saying that I promise you there isn't a parent in the world who hasn't at some point wistfully wondered what it would be like to be childless.

When there are babies in the house, the lack of sleep makes your eyes feel like they've spent the night rolling in a beach in New Jersey. Remember the movie Contagion, where there's a scene that has hundreds of people lying sick on cots in a high school gymnasium? I saw that part and thought, "they are so lucky, they get to sleep."

Of course, having children in school means you are living a contagion. You'll catch every virus and flu and worse, but will you get to sleep until you feel better? Of course not! Your kids are sick! Get out of bed, one of them just threw up on your face.

Just about the time they start sleeping through the night on a regular basis, they'll get their driver's licenses. And you thought you were having insomnia before. Or your daughters will start dating, which they used to call "courting," as in, "my daughter is courting danger." You think serial killers never went to prom? Of course they did! Your daughter is probably dating a serial killer right now.

This is what it is like to be a dad—you know exactly what is going on, but no one will listen to you except maybe the dog. Certainly your own parents will be no help.

Me: "I left my kids a list of chores to do this weekend while I went to work, and they didn't do a single thing on the list!"

My Mom: "What do they want for Christmas?"

Me: "I told them they're grounded, and they all yelled at me and went to their rooms and slammed the door and called their friends to say I'm the meanest man in the world."

A few days later, when I call again, my dad is still laughing.

"All of this," I advise my dog, "is them trying to drive me insane so they can have me committed and then trade in my car for a Jeep."

My dog regards me with wonderfully sympathetic eyes. He seems to understand everything I am saying. Is that crazy? Yes! This is my point. Having kids will make you crazy. In fact, in certain languages, "father" translates to "crazy person." This must be true because my dog says that it is.

So yes, there are times when I suppose I would agree with my father that a little infertility here and there wouldn't have hurt too much. Although, I guess I have to concede that infertility isn't exactly an inheritable trait. Plus, eventually your fertility will show up in your own children. Then they'll be the ones operating on no sleep and two quarts of cold medicine. They'll be the ones who can't get their kids to do chores.

W. Bruce Cameron's A Dad's Purpose: One Man's Search for the Reason Nobody is Listening to Him is out now. Add it to your Want to Read shelf here.

Have some great literary father's day advice? Share it in the comments!

My dad used to smile and say "Ah, the chickens come home to roost" when I would complain to him about my kids. He always had some folksy old saying like that.

My mother-in-law actually apologized to me for wishing "one just like you" on my husband. When is was clear to her we had one!

My Dad (man do I miss him) simply spoiled my boys rotten then sent them home to me! Funny thing about it? Both boys were so well behaved with him, full of respect and awe. It is a generational thing for sure, but it doesn't make it any easier for us hapless parents. With that said, we must live for the days when we become the elders, laughing at our kids as they rear their own unruly brood!

After reading this I really miss my dad but I did laugh in some places. Remember our children are what we were like when we were them.

Great essay! My dad was 92 when he passed. This reminds me of him and the fact that I miss him each day. Thanks for the humor :)

I was just talking about this book. Sadly, my dad died when I was only 8 (he was 37) or I would have given him this book for father's day. I love W. Bruce Cameron!

My Dad told me aren't comeuppance fun. I now ask my kids don't you wish you taken all the naps I wanted you to take. I love getting one of my 4 granddaughters for a couple hours every other Sunday. Especially letting them help make cookies and letting them take most of the cookies home knowing that they are going to drive their parents crazy for awhile. Also my kids have begged me to take the mothers curse off. You're kids are going to be 10 times worse than you.

Reminds me of my dad buying his first grandson a little red flyer wagon for Christmas and said to me "this is payback". LOL ....

Papa Joe died NYE 2013, age 82. He taught me how to paint the house properly at a very young age and I've always remembered that. I also remember mom telling me to go into my room and wait for daddy to come home from work. By the time he got home, I had stuffed about a dozen washcloths down the back of my pants cause I just knew I was going to get a whooping. He laughed so hard. LOL Dads - God love them!

Children are the best revenge for being a brat to your parents!

I love the Navajo way of bring up children. On the mothers side , they see to it that the child always has food clothing and a place to sleep. On the Fathers - that side is responsible for helping the child discover their skills, their self worth, how they will make their may in the world. The whole expended family is involved, with parents taking care of the day to day, the Grand parents teaching the wisdom of the old, Aunts and Uncles teaching possibilities and other ways of thinking. In the small town that I was raised in, pretty much anybody took in kids for dinners after paying ball or king of the hill. Once I moved to Phoenix, we knew very few people and never played with kids - they were too far away!
I was always grateful to understand that I had access to tools that my parents didn't. so I didn't have the prejudice they did to gays or minorities. The one thing is I didn't have a way to communicate with them without it turning into a right/wrong, good/bad or because I said so. Because of that, because I was so different, I was a rebel, I was a black sheep of the family, where my sister - who grew up emulating my parents, became their golden girl. Thank heavens that we got the Internet, so I could make my own family who loved me inspite of being different!

They say we inevitably turn into our parents.

Shortly before my Granda passed my dad was constantly complaining that he was a crotchety old so-and-so who wouldn't listen to the doctor/him, wouldn't take his pills, wouldn't eat right etc. etc. I've waned him that when he starts doing that to me (and he will) I will remind him of how he used to complain and I'll expect him to listen to me (which he won't, but what can you do?).

Good read! :) More great words and insight from an amazing author. It makes me think of my father, and miss my grandfather who I was very close with.

Love this author and his work. Made me think of my Dad and how he would say to all five of us (his kids) when an argument ensued ..."You're all nuts!" Everyone laughed and it was all okay.

I wish I had a father or parent who actually cared when I was a teenager. My son does not understand what its like to have parents who just did not care about what I was doing as a teenager.

I'm sorry to hear that Jeanne. You deserved better. And sounds as though you are being the parent to your son that you deserved. Blessings to you.

It’s hard being a parent never knowing how these little people will develop, but be assured that at some stage you as a parent will feel frustrated, angry, sad but most of all protective as you will remember what you were like at that age! But the laughter, love and secrets they share with you will be remembered for a life time. My 31yr old son & wife have a baby and already we are laughing at the outrageous ideas they have on getting him to sleep, eat & poop on demand! Don’t you just love them knowing that you were once, three times for me, were in the same sleep deprived state they are in now