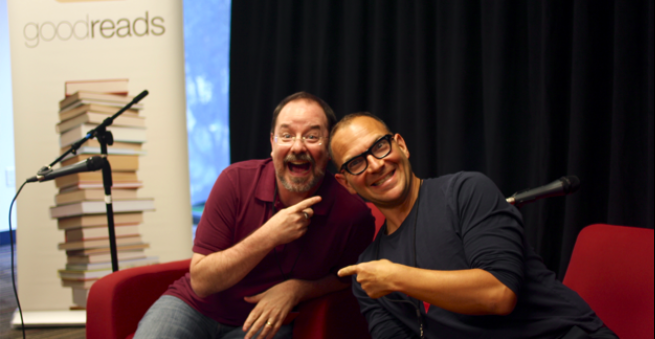 We were thrilled to have not just one but two great science fiction authors grace our hallways in San Francisco for a recent authors@goodreads event: John Scalzi and Cory Doctorow came to talk about their new books—Scalzi’s The Collapsing Empire and Doctorow's Walkaway—and answer a few questions from both readers and employees.
Goodreads: Tell us about your new books.

John Scalzi: The basic concept of The Collapsing Empire is that there is this empire…and it collapses. I know right? Spoiler alert! It kind of gives it away right there in the title. [laughter]

Cory Doctorow: Walkaway is an optimistic disaster novel. Disasters are things you get whether you’re an optimistic or pessimist. Doesn’t matter how Pollyanna your outlook is or how well ordered your society is, it’s going to be subject to exogenous shots. You’re going to have belligerent asshole neighbors, or earthquakes, or tsunamis, or mutating microbes, or meteor strikes. What really matters is not whether you have disasters but what happens after them. Does the disaster become a catastrophe? Do people take it as a signal to unleash their bestial nature? Or is it the moment where people rise to the occasion, to see how they can help? 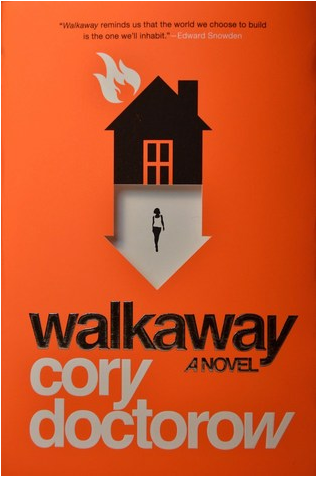 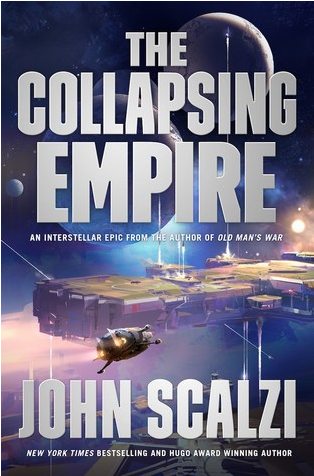 Scalzi: This is actually an example of author being completely clueless to the rest of the world while following up on a weird interest of his own.

I was thinking about the age of sail and empire from the 15th to 18th century and how it would have been drastically different if, for example, the jet stream and the major Atlantic Ocean currents had just gone away and what that would mean for Portugal and Spain and the UK.

In the course of the writing there do seem to be a lot of parallels to what’s going on in the world today. People will come up to me at an event and be like, “I just read your book. It’s clearly about oil.” And you’re just like, “OK!” Because after a certain point once the book is out, it’s not just a book you brought up in your own head, it’s a book that exists in a space between your brain and the brain of the reader. What the reader reads into it is not invalid even if it’s not something you were directly on point to.

For me it was just what happens when you have this natural feature of the world or universe that everyone relies on: It could be a river, it could be the forest, and everyone just assumes it going to be there. But then the forest goes away because the climate changes or the river changes its riverbed because it does—the Mississippi does it all the time. What happens then and what happens to those people who think that feature is always going to be there? It wasn’t about modern times, but of course I live in the world and the modern world is going to get into it no matter what.

Doctorow: We assume books are about things and that authors know what those things are, and both of those statements are contestable.

Ray Bradbury went to his grave swearing Fahrenheit 451 was not a novel about censorship, but that it was about the evils of television. And if someone that much smarter than me can be that sure about something that is so manifestly wrong… [laughter]

But that said, I drew my inspiration from a lot of places. The most proximate cause was reading a San Francisco writer, Rebecca Solnit. Her book, A Paradise Built in Hell, is about how kind people are in disasters, how noble and wonderful people are in disasters, and how completely certain the people who hold the reigns of power are that in times of disaster the poor are coming to eat them, and what they do preemptively to stop that from happening and how that gets in the way.

Also, Thomas Piketty’s Capital in the Twenty-First Century. It's a wonderful book. I think it’s unfortunate that he took 700 pages to say what he could have said in 100 pages because it intimidated a lot of people. Just read the first 100 pages you’re good! His seminal work on wealth and equality was very, very influential on me.

And then there’s a writer named Bruce Sterling, a science fiction writer and now media critic. He created this movement in the late 90s called the Viridian Greens, the answer to the Austere Greens or the Green Left. Bruce said what you need is a luxurious green, a leisure green, a green that is about the celebration of the material culture. The superiority of material culture that is designed to be beautiful and wonderfully made and to bring you pleasure, but is also designed to gracefully decompose back into the material stream when it’s done.

Read the full interview with Scalzi and Doctorow here.

Janice wrote: "Loved Red Shirts. A good "spoof" of Classic Star Trek. Beam Me Up, Scotty!"
Sounds great........I'm such a Trekkie! Thanks for the recommendation:)

Both of the books featured in this post are now in my to read list. I once did a survey assessment of my own writing and the particular project was compared to the style of Corey Doctorow's writing, interesting post!

Looking forward to it too

Thank you for sharing such a great and informative post.

Welcome to online Cordless Drill Batteries Store, we offer a complete line of power tool batteries and cordless drill chargers for most cordless tools at www.drill-battery.com.au

Welcome to online avg antivirus support. We give help 24/7 to our Customers at avg retail card

An amazing post that you are shared...I am actually getting ready to across this information, is very helpful for me. Bitdefender Service Support Thanks for sharing such an amazing article. I really appreciated.