What do you believe in? You can find out (if you don't know already) when the television adaptation of American Gods premieres this Sunday on Starz.

While the story may be new to some of the people tuning in, Goodreads members have been a fan of Neil Gaiman's unforgettable tale since its publication in 2001. Check out the most-liked quotes from the book, including an epic speech about humanity, destiny, and belief. 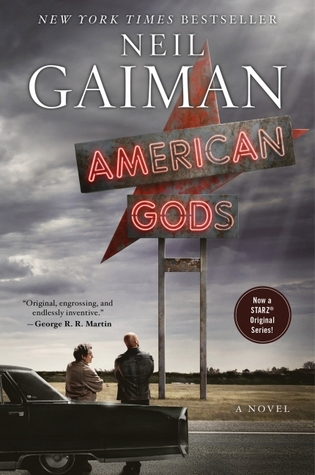 #4. "All your questions can be answered, if that is what you want. But once you learn your answers, you can never unlearn them."

#3. "'Hey,' said Shadow. 'Huginn or Muninn, or whoever you are.'
The bird turned, head tipped, suspiciously, on one side, and it stared at him with bright eyes.
'Say 'Nevermore,' said Shadow.
'Fuck you,' said the raven."

#2. "What I say is, a town isn't a town without a bookstore. It may call itself a town, but unless it's got a bookstore, it knows it's not foolin' a soul."

I can believe in Santa Claus and the Easter Bunny and the Beatles and Marilyn Monroe and Elvis and Mister Ed. Listen—I believe that people are perfectable, that knowledge is infinite, that the world is run by secret banking cartels and is visited by aliens on a regular basis, nice ones that look like wrinkled lemurs and bad ones who mutilate cattle and want our water and our women.

I believe that antibacterial soap is destroying our resistance to dirt and disease so that one day we'll all be wiped out by the common cold like martians in War of the Worlds.

I believe that the greatest poets of the last century were Edith Sitwell and Don Marquis, that jade is dried dragon sperm, and that thousands of years ago in a former life I was a one-armed Siberian shaman.

I believe that mankind's destiny lies in the stars. I believe that candy really did taste better when I was a kid, that it's aerodynamically impossible for a bumble bee to fly, that light is a wave and a particle, that there's a cat in a box somewhere who's alive and dead at the same time (although if they don't ever open the box to feed it it'll eventually just be two different kinds of dead), and that there are stars in the universe billions of years older than the universe itself.

What's your favorite quote from American Gods? Share it with us in the comments!

I came here looking for "I believe that anyone who says sex is overrated just hasn't done it properly", and wasn't disappointed. It was nice to get the director's cut of it, though.

“Not only are there no happy endings,' she told him, 'there aren't even any endings.”

“We have fucking reprogrammed reality. Tell him that language is a virus and that religion is an operating system and that prayers are just fucking spam.”

While I like most of the quotes my favorite is Quote #2. Every town should have a bookstore--and every sizable city should have several bookstores.

“Gods die. And when they truly die they are unmourned and unremembered. Ideas are more difficult to kill than people, but they can be killed, in the end.”

Praveen wrote: "“We have fucking reprogrammed reality. Tell him that language is a virus and that religion is an operating system and that prayers are just fucking spam.”"

I loved that one.

My favorite:
“This is the only country in the world," said Wednesday, into the stillness, "that worries about what it is."
"What?"
"The rest of them know what they are. No one ever needs to go searching for the heart of Norway. Or looks for the soul of Mozambique. They know what they are.”

I've always liked "If Hell is other people... then Purgatory is airports."

#1 absolutely blew my mind when I first heard it on the audiobook, and I'm not even sure why. I suppose it encapsulates the huge unacknowledged contradictions in most people's worldviews and in life in general.

Then he grinned, like a fox eating shit from a barbed wire fence.