Marissa Meyer Enters Wonderland and the Mind of a Villain 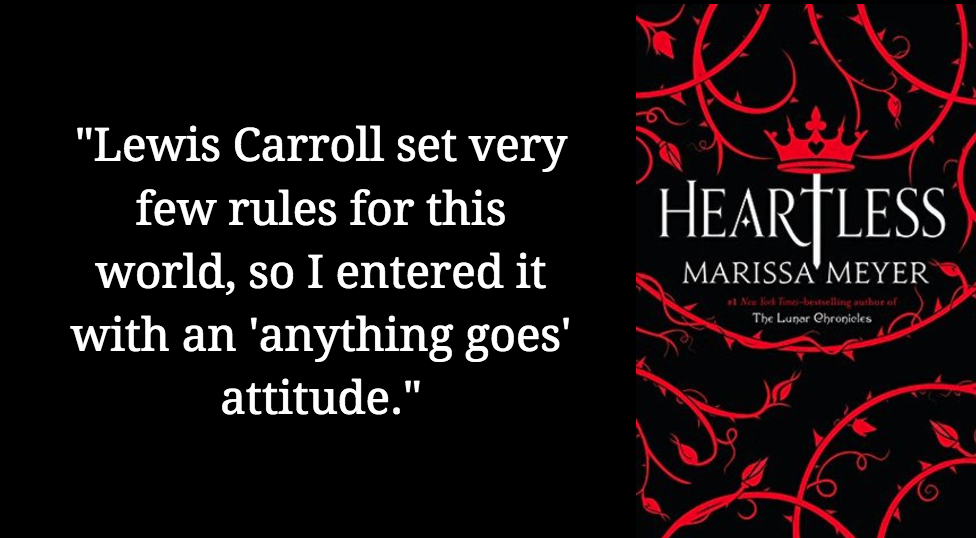 Readers have devoured Marissa Meyer's futuristic take on beloved fairytale characters in The Lunar Chronicles since the 2012 release of Cinder.

Now comes Heartless, in which Meyer turns to Alice in Wonderland, offering a prequel to the Lewis Carroll classic and exploring the vicious Queen of Hearts' backstory. In short, she's leaving the heroines behind and going full villain.

Meyer talked to Goodreads about going to Wonderland and getting into the head of one of literature's most famous bad girls.

"I absolutely love villain origin stories, especially when they take everything you think you know about a villain and completely turn it around, making it so the reader can understand, maybe even sympathize, with this character that once they may have despised.

I loved the idea of taking on a similar challenge to create a new perception of the infamous Queen of Hearts. We learn so little about her character in Alice in Wonderland, and I felt there was so much potential to craft a backstory that would bring her to life in a brand-new way."

She added that one of her favorite aspects of writing Heartless was being able to craft her own version of Wonderland.

"Lewis Carroll set very few rules for this world, so I entered it with an 'anything goes' attitude. I wanted to grasp that same feeling of nonsense and silliness that we get from Alice while slipping in extra layers of darkness as well.

It really gave me the chance to let my imagination run wild, which is something I was craving as a writer, especially after all the rules of technology and science and world-building I'd built into the universe of The Lunar Chronicles."

Read our full interview with Marissa Meyer. And add more of Meyer's books to your Want to Read list here.
Like · 49 likes · 5 comments

Oh look, somebody noticing a one dimension character in an influential piece of literature and deciding to explore that character and go beyond the one dimension sketch - continuing an incredibly intellectually valid and literally centuries old tradition carried out by some of the most canonical authors in literature. This is not a new or 'copycat' trend!

Most villains do tend to have harrowing backstories. It is th..."

Most villains do tend to have harrowing backstories. It is th..."

That's totally true. Some of them have sad stories that that bitterness turn them into bad people. Not everybody knows how to face adversity.