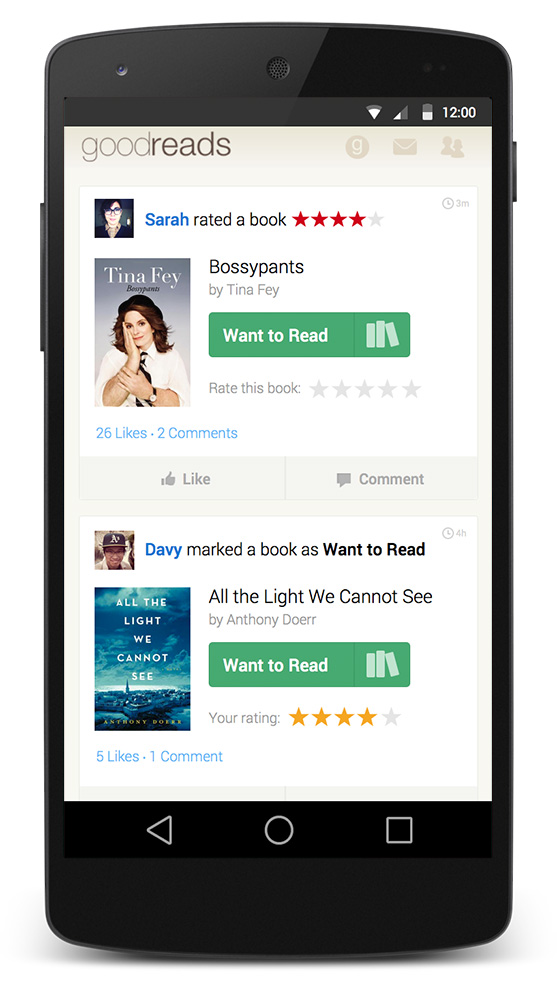 Download the updated app from the Google Play Store or Amazon App Store, and tell us what you think!
Like · 71 likes · 42 comments

(haven't checked it out yet, but it can only be better)

Thank you sooo much!! Best news of the day behind my book win ;)

This is great. What's still missing is the ability to follow post/comment/discussion thread (set notification for new post). I need to find manually, scrolling my friends' reviews to check whether they already replied. Same goes for discussions in groups.

Wish there was support for quotes!

I'd like to be able to see all of my shelves. When I add a book, my shelves get cut off and I have to go back to the book when I'm next on the website and add it to the missing shelves. Is this addressed in this update?

I think I'm the only one who didn't like it. :/ Apart from what's missing and what's not, it didn't look appealing to me. It looks more like Goodreads mobile than Goodreads Android app. Thanks for the update anyway.

At the risk of sounding ungrateful... That's it? Bug fixes, a minor upgrade, and a new font? Sorry, but compared to the mammoth upgrade iOS got (months ago) and the lovely new modern ui to match iOS 7 and 8, this is what Android users get? Android 5 brought with it Material Design amd a whole new design standard for Android, and you guys gave us this... When (when?!!) will we finally get something that looks like it was made this side of 2006? Something even vaguely resembling Google's design standards for Android would be nice.

Unimpressed, but thanks anyway.

Edit: Jesus, even the screenshots show a Nexus 5 running Android 5 Lollipop... So you guys know what Material Design looks like, right?

I'm not sure why iOS gets the focus for apps? Even in the US, Android has a bigger market share.

I mean, thanks for the update and all, because I *DO* think it looks nice, but... why does iOS get all the good stuff? Please, for once, can we get something as nice as iOS? Jeez.

This is a welcome change thank you for the update. =-)

Am I the only one who:
1. If comments on a status are spread on more than 1 page, can't read them. I receive notification about a new comment, but can't read anything from page 2 onwards.
2. can't read spoilers in comments in groups discussions (I haven't checked yet on users' reviews)
?

The new update feed is much better than the old one, but with those bugs, the app is basically useless to me.

It got better! Thanks for the update :D

Omg! Finally, but not impressed #sorrynotsorry

I haven't check it up yet, the real thing I want for this app to be better is the possibility to exit from the app. It's kinda annoying when you have to close it from the "home" button of the smartphone and it doesn't have an option within the app (and the back button goes back to the previous page instead of exit the app). =(

Lys wrote: "Am I the only one who:
1. If comments on a status are spread on more than 1 page, can't read them. I receive notification about a new comment, but can't read anything from page 2 onwards.
2. can't ..."

I find not being able to read the spoilers annoying too. Also links created to a certain comment don't work when accessed from the app.

Thanks for the updates but it could get more better.

Went to update my Goodreads app and I love the new look! So sleek!

Thanks a lot for the updates, but still "searching for quotes" is not available for android users, so please take this into consideration and hope to make it available as soon as possible

Great news. Can't wait for it to be fully functional. ;)

Ellen wrote: "I would like to see my reading challenge."

Tina wrote: "Ellen wrote: "I would like to see my reading challenge."

Looks nice, but I'd love to see my reading challenge, spoilers, and explore options.

Jennifer wrote: "Looks nice, but I'd love to see my reading challenge, spoilers, and explore options."

This is a very welcome change from the ancient feed of the previous version but what I would really like is the new books page from the iOS. That looks amazing and that would look even better on Android tablets.

on all of them.

Noel wrote: "At the risk of sounding ungrateful... That's it? Bug fixes, a minor upgrade, and a new font? Sorry, but compared to the mammoth upgrade iOS got (months ago) and the lovely new modern ui to match iO..."

Lolll I knew it would still suck without even needing to look at it but thanks for the confirmation.

Thank you for all of your hard work. But is anyone else having this issue?

When I check notifications and try to open a thread from a group, the app redirects back to the app homepage. I can't open any of my notifications from groups. Did not have this issue prior to update; hope it's patched soon.

This is definitely a big step in the right direction, and I am happy for it - but I also hope you guys know that there is much room for improvement. Material is a positively gorgeous visual language, and I believe the app would benefit a lot from it. I realize it's a ton of work to update it, especially because the app was never Holo in the first place, but at this point it's the single most wanted "feature" in my list.

Noel wrote: "At the risk of sounding ungrateful... That's it? Bug fixes, a minor upgrade, and a new font? Sorry, but compared to the mammoth upgrade iOS got (months ago) and the lovely new modern ui to match iO..."

I agree with you - hardly anything seems done. One of the main gripes I was waiting for is when they allow you see to yearly reading challenge progress...right now you can't at all, which is so bizarre.

Melanie wrote: "I'm not sure why iOS gets the focus for apps? Even in the US, Android has a bigger market share."

Yeah I don't get that either, I've seen the same thing happen with other sites and getting priority first.

thank you for the very nice article

Get back to me when you totally revamp the app and make it functional on Apple AND Android. As of right now you, I'd rather use the site than the app on my Android phone or my iPad, even if you paid me to use the app.

apple support the new Android update are useful for the user of android and it more updates will be great if it would not harm any apps which is running right now.