Raise Your Glass to These St. Paddy's Day Reads

Posted by Jessica on March 12, 2014
10 likes · 11 comments
Here at Goodreads, we've ordered some Guinness for our kegerator and learned two essential phrases in preparation for St. Patrick's Day:


If your Irish vocab stops there, you're not alone. Irish, aka Gaeilge or Irish Gaelic (not to be confused with Scottish Gaelic!), is one of the world's dying languages. Recent estimates put the number of speakers who use it daily as low as 80,000, out of 4.5 million people living in Ireland. However, Irish is still taught in schools and a devoted population still lives in Irish-speaking regions, called the Gaeltacht, which are spread across the west coast of the island country. Irish speakers have a grand tradition of storytelling and general gift of the gab—or craic (pronounced "crack").

In honor of the day we've picked some of the top-rated Irish language works on Goodreads. And don't worry—they are all readily available in English, too. 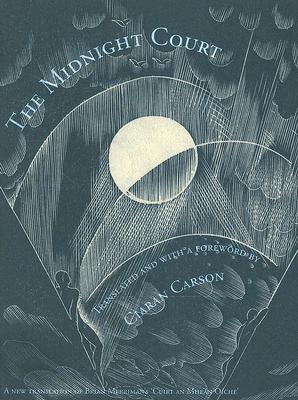 Cúirt An Mheán Oíche, The Midnight Court
by Brian Merriman

Trade in your bawdy limericks for Irish literature's favorite work of comic poetry. It's got a wandering poet, a fairy queen, and an epic battle of the sexes that argues the case for both wanton promiscuity and pure celibacy. Goodreads member Bruce calls it "rollicking and ribald" and adds "plot description is entirely inadequate to convey the cleverness and roistering wit of the poetry." Read the full poem in English here. 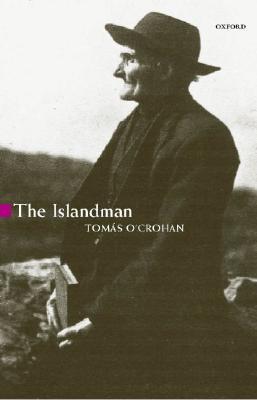 No longer inhabited, Great Blasket Island was formerly Ireland's westernmost community, teetering on the edge of the unforgiving Atlantic Ocean. The island remains famous for its writerly output, including this 1929 autobiography about eking out an existence in the isolated and harsh environment. Goodreads member Anna says, "Sometimes a book is written for a distinct purpose, as this one was, but another evolves, a great beauty unfolding. The Islandman is such a tale, regaling [us with] a unique history while capturing one small moment, never to return." 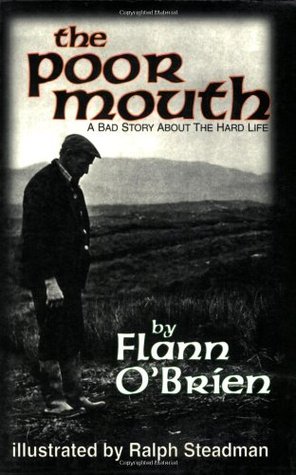 An Béal Bocht, The Poor Mouth: A Bad Story about the Hard Life
by Flann O'Brien (aka Myles na gCopaleen, aka Brian O'Nolan)

Being poor is a competitive sport in Irish lore, and this sharp satire of the quintessentially Irish "poorer than poor" memoir tells the tale of one Bonaparte O'Coonassa, who lives in abject poverty in the fictional village of Corkadoragha, where it's always raining and there's nothing to eat but potatoes. Goodreads member Geoff calls it "not a rib-tickler or a knee-slapper but a whole body- and soul-shaker. Books like this make you glad to be a human being, alive and well and of unsound mind." 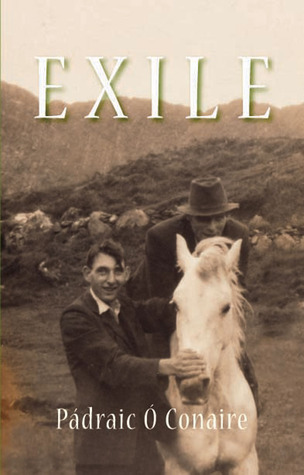 Particularly prolific before his death at age 46, Ó Conaire wrote hundreds of short stories and dozens of books and was a central figure in the Gaelic revival, a resurgence of interest in the Irish language at the end of the 19th century. His best-known novel, Exile, tells the audacious story of a double amputee who must join the circus to make a living. 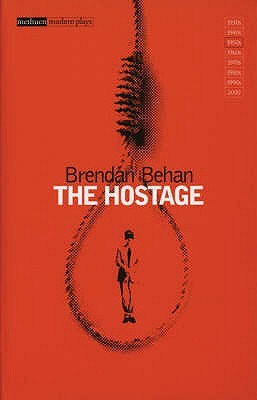 An Giall, The Hostage
by Brendan Behan

Caught with explosives at age 16, IRA volunteer Behan spent the remainder of his teen years in British prison and immortalized his experience in the classic memoir, Borstal Boy. He soon became as infamous for his carousing as for his writing, which included fiction, poetry, and several plays. Goodreads member Everett says, "Filled with lyric and song, The Hostage is more like a musical than a drama...it's poignant and funny and has that famed Irish wit and black humor backing it up." 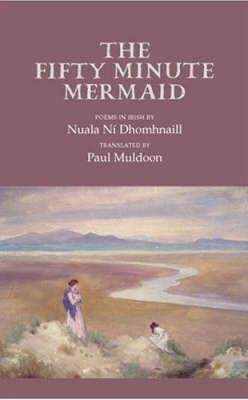 Read the Irish and English texts side by side in this poetry collection about mermaids who come to live on land, translated by Paul Muldoon (poet and poetry editor for The New Yorker). A folklore lover, Ní Dhomhnaill is considered one of Ireland's best living poets. Goodreads member Rachel calls her work "beautiful, haunting, strongly feminist."

Along with your pint of Guinness, what famed Irish writers will warm up your insides this St. Patrick's Day? Tell us in the comments!

If you want something more contemporary, but still heavily Irish influenced, you could try my most recent release, Green Wings to Eden (Dec 2013). https://www.goodreads.com/book/show/1....

The House on the Irish Hillside - Felicity Hayes-McCoy is a book of non-fiction, a memoir of her life from growing up in Dublin, visiting the coast of Dingal while learning to speak the Irish language, not 'gaelic' and her life in London as an actress/writer for the BBC. In it she mentions the interesting people she meets along the way, her subsequent marriage, the time they would leave London for short holidays to the area and their final decision to move there and re-hab the house and work from home. And that is not even the first half of the book as I am currently reading it. Very enjoyable read!

Another good Irish read is The Crocodile by the Door: the Story of a House, a Farm and a Family by Selina Guinness. It's about home and farm renovation, Dublin style. Highly recommended.

The Tailor and Ansty by Eric Cross, an earthy account of this couples life that caused grave consequences for them when published; Foster by Claire Keegan, a stunning novella of 1980s Ireland that feels utterly timeless; Death and Nightingales by Eugene McCabe - beautiful and bleak.

I read Trinity by Leon Uris over 30 years ago and I still think it's one of the best books I've ever read!

you might want to check out a short read celebrating the Irish traditional Lisdoonvarna Festival.
Check out the recently published: Holiday Magic: An Irish Romance

The Irish American writer, Lisa Carey, wrote a book called, "The Mermaids Singing" that is truly one of my favorite books of all times. It is a beautiful book written from the vantage point of 3 Irish women ( from the same family) as they tell their version of the same story. Haunting, resonate, mesmerizing, this book is a must read for all those intrigued by the land of Eire.

reply | flag
message 10: by [deleted user] (new)
Apr 01, 2014 10:58AM
The Question: So what was Ireland really like when old J.C. was being hammered to the plus sign?
Answer: Don’t be sacrilegious. It was inhabited by many different warring tribes, who were obsessed with owning cattle and pagan rituals when they weren’t trying to bump each other off. Far from invading Ireland, the Romans in Britain were themselves subject to frequent raids by Celtic warlords and kings from Ireland, some of whom settled abroad in places like Scotland. Scoti is the old Latin word for Irish, which is why Scotland means Land of the Irish. While Christianity was spreading throughout the Middle East and Roman civilisation was diminishing in its power, Celtic warlords would attack an underdefended Britain and carry thousands of slaves back to Ireland. One such was a Welshman called Maewyn Succat, who spent seven years as a drudge in the Wood of Voclut in County Mayo.
Question: Never heard of him. Who was he?
Answer: Not much is known about him either. But myth is more fun than truth, so here goes. He was born on the West coast of Roman Britain, in a village called Bannavem Taburniae, some time in the early 5th century AD. His father Calpurnius was a deacon and a town councillor. His grandfather Potitus was a Christian priest. He is believed to have trained for the priesthood under St Germanus at Auxerre.
Question: Why is he important?
Answer: Official Irish history starts with him, because he introduced writing into Ireland. Before him, it was all stories, handed down from generation to generation. His documents, written in a coarse Latin, provide the earliest record of the non-violent conversion of Ireland to Christianity. Although a prominent missionary himself in the North and West of Ireland, who had received a vision telling him to return to pagan Ireland, he was not the first to preach the gospel. Palladius had been sent by Pope Celestine before him, to be ‘the first bishop to the Irish believers in Christ’. Succat began the episcopal system of church government, whereby each bishop exercised control over his own diocese. He established monastic life on the island, with lay abbots in charge of the monasteries. More than anyone else, he is credited with transforming a pagan land into the isle of saints and scholars. After his death, many missionaries left Ireland to convert heathens in other countries and Ireland became a true haven of faith and learning for the rest of Europe during the dark ages that followed Rome’s fall. That’s the blurb. The real reason for such a dramatic growth in Christianity in pagan Ireland between the 5th and 7th centuries was climactic catastrophe, possibly caused by a comet strike or immense volcanic activity. The sun dimmed, crops failed, famines were recorded. In 542 A.D. there was a plague. Throughout Europe barbaric tribes had started to establish new pagan kingdoms among the ruins of the Roman villas and palaces. The Church became a source of hope to the masses and the cult of the relics took hold. For some reason people believed that touching the bits left over from dead saints would protect them against sickness and plague, rather than having the opposite effect.
Question: But what about the shamrock, the mountain, the snakes and the holiday?
Answer: Legend has it that Maewyn used a three-leaved clover to explain the doctrine of the Blessed Trinity to some Celtic chieftains. One stem with three leaves equated to one God and the Father, Son and Holy Ghost. ‘Now do you understand? This is the daddy leaf, here’s the wee boy’s one, the last fellow’s … eh … the … Holy … Ghost. Down below is … heh, heh, heh … God. Are you with me? Hello? Hello?’ Except that he’d be speaking in Latin as he couldn’t manage more than a couple of fuckles of the local lingo. To impress them he called on God to make it snow, and it did. Then he blessed himself and it stopped. This proof of miraculous powers wasn’t quite enough to turn the Celtic kings away from sun worship, but they did grant him permission to preach his Christian message. So it was actually the serfs and vassals that heard the call and took to the faith. His message would have brought great hope to a people whose lives were spent picking up the king’s droppings and frying them up into a manageable stew. Maewyn probably never visited that mountain in Co. Mayo, which was part of a much older pagan pilgrim route and harvest festival, held in honour of the great God Lug. There is no evidence to suggest that snakes ever existed on the island of Ireland and if they did, Maewyn Succat was the only one who saw them. Itself a worrying thought. Although these serpents were probably symbols of the evil that his mission removed from the island, it’s more likely that this particular myth stems from the definition of the word Gael as coming from Gaodhal Glas (gale glass), a leader of the Milesians. Moses cured him of snake-bite and promised that none of his descendants would be plagued by snakes. Anyway, Maewyn may have died on March 17th, year unknown. And St. Patrick’s Day sounds a whole lot better than Maewyn Succat Day, doesn’t it?
Question: Begorra. So the Patron Saint of Ireland was a Brit. Now that’s just fucking brilliant. How in God’s name did that happen?
Answer: God himself only knows. Maewyn came first. St Brigit, who may have been a pagan goddess of fertility, was a close second, and St Colum Cille brought up the rear as usual, the filthy hound.
truth about St. Patrick, an extract from my history of Ireland: