The Winners of the 2013 Goodreads Choice Awards! 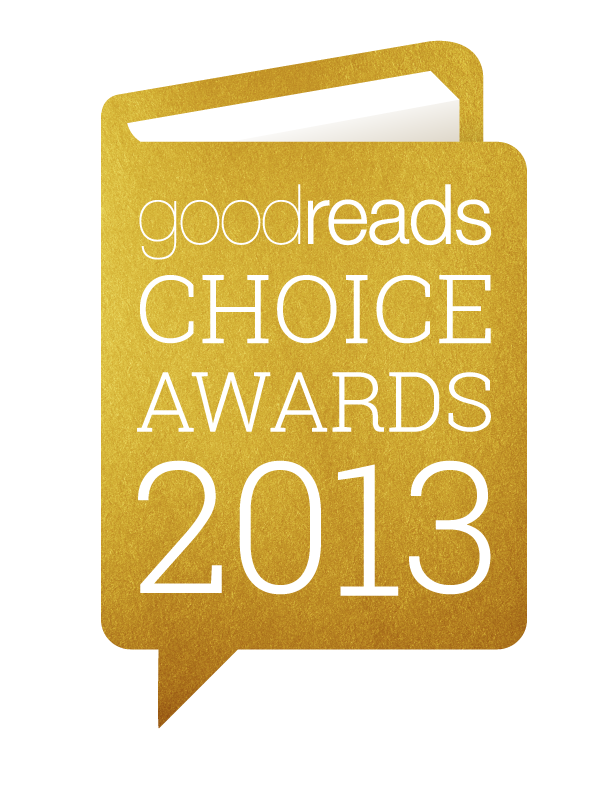 Stop the presses! We have our winners! Casting nearly 2 million votes in the 5th annual Goodreads Choice Awards, readers have chosen their best books of the year. No other major book award tells you what the readers think—our nominations and voting rounds are all about what the readers love. Plain and simple.

View the winners & runners-up in 20 categories »

Khaled Hosseini is the runaway winner in Best Fiction for his moving novel And the Mountains Echoed. In a closer race, Temple Grandin took the top prize in Best Nonfiction for The Autistic Brain, despite stiff competition from Mary Roach and Sheryl Sandberg.

For the third year in a row, a book in Veronica Roth's Divergent series is the big winner in Best Young Adult Fantasy & Science Fiction. Her perfect trifecta began with Divergent in 2011, followed by Insurgent in 2012. She caps it off this year with the series finale, Allegiant.

The most hotly contested category was Best Mystery & Thriller, where Dan Brown edged out Robert Galbraith (a.k.a. J.K. Rowling) by only 296 votes! Perhaps sleuth Robert Langdon can consult with Detective Cormoran Strike for his next madcap case.

Kate Atkinson's time-bending Life After Life won with a dominant lead in Best Historical Fiction. Stephen King also won by a large spread in Best Horror for his sequel to The Shining Doctor Sleep, although the win may be bittersweet, because the runner-up in that category is his talented son, Joe Hill! Telling hair-raising stories runs deep in that family.

Earning the most votes of any single book awards-wide, Neil Gaiman's The Ocean at the End of the Lane won Best Fantasy by the widest margin of this year's Choice Awards, beating runner-up A Memory of Light by 30,513 votes! Yet the tables were turned in Best Children's Books, where Rick Riordan beat Gaiman by almost the same margin, 30,017 votes. Undaunted, Gaiman was definitely this year's MVP. The triple nominee also secured a third-place finish in Best Picture Books, behind winner Drew Daywalt's The Day the Crayons Quit and Lemony Snicket's The Dark.

Other winners include I Am Malala in Best Memoir & Autobiography and Jim Henson: The Biography in Best History & Biography. And don't miss Rainbow Rowell's major accomplishment in Best Young Adult Fiction, taking first and second place for Eleanor & Park and Fangirl. No easy feat!

You can view the vote breakdown for all 400 nominated books in 20 categories, and if you haven't read them all (we'd be pretty impressed if you had!), you can start adding this year's best books of the year to your to-read list. Thank you to all the voters who came out to support their favorite authors and cheer on their favorites from round to round. And now we're starting to wonder...what will be the big books of 2014?

Congratulations to our winners! » 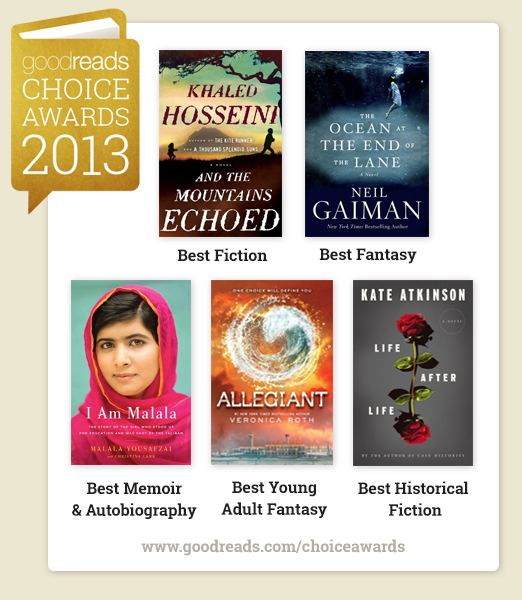 I had read at least five of the nominees, including one big winner. I had rated none with five stars, and chose not to vote for them. But there certainly are some here that I'd like to read.

Why did Allegiant win? :O I absolutely loved the first book. Second book was OK. Can't get through the third book, though...
"Unravel me" by Taheref Mafi is just perfect, hoped that one would win :(

Buck wrote: "I had read at least five of the nominees, including one big winner. I had rated none with five stars, and chose not to vote for them. But there certainly are some here that I'd like to read."

I read one of the big winners and rated it one star and chose not to vote for it and it won anyways LOL I guess that shows how different we all are :)

I think some newcomers should have won.

What blah winners. It's more like "What was the bestselling book in this category this year?"
Bestselling fiction of the year on Amazon in separate categories:
Inferno - Win
House of Hades - Win
Mountains Echoed - Win
Allegiant - Win
Doctor Sleep - Win
Yawn.

I only cared for the Life after Life win despite the high level of unevenness in the book.

Not happy about COLD DAYS by Jim Butcher not being listed in the announcement.

Honestly, the fact that Scott Lynch's "The Republic of Thieves" didn't win in the Fantasy category just... fills me with white-hot rage and makes me want to go out and kick puppies.

Congrats to Allegiant winning, though I was hoping that Steelheart would somehow win. But... a new book at the start of a new series, vs the end of a series with a dedicated fan base... Yeah, the odds weren't with it. Though, honestly, I haven't read Allegiant yet, haven't even gotten to Insurgent yet. Too many other books to read. lol

I totally agree with that!!

I'm not going to pretend I didn't see it coming, but seriously, Allegiant? Lazy writing, shitty character development (when it's even attempted), an ending so fucked-up and, yeah, LAZY, that in comparison Clare's things look like a masterpiece... (Honestly, once Through the Ever Night was out, yeah, I voted for Clockwork Princess, although it's an incredibly stupid book and its epilogue sucks balls, but at least the characters are MOSTLY bearable). And people vote for THAT? Ugh.

I completely agree with both of these, although I think Allegiant *could have* been an absolutely incredible book. We all know this. It did not have to be that heart-wrenching.

Jeremy, anything less than a 4 star rating sucks.

ME TOOO ME TOOOOOO

I MOST CERTAINLY AGREE WITH YOU ALL

It's a shame Inferno won. Inferno is nothing but a tourist guide book. I have great respect for Dan Brown, but Inferno is probably the worst novel I ever read - what a waste of time. I am sorry but this book doesn't deserve any nod at all. My vote went to Ordinary Grace.

They didn't pick books that deserved to win i think.

You should have picked my book...LOL

The only book that won that I actually read was "The Ocean at the End of the Lane", which I didn't like. A couple of the winners I plan to read but the rest...didn't even catch my attention. Pretty disappointing overall.

Actually, it seems like a few of the books were recent releases and a lot of people didn't have a chance to read them...me included.

"Allegiant? Lazy writing, shitty character development (when it's even attempted), an ending so fucked-up and, yeah, LAZY.

Clockwork Princess, although it's an incredibly stupid book and its epilogue sucks balls."

Yeah, what's with the war? Both are sucky authors who write bad books.

This is an interesting list of the most popular books as voted by Goodreads members, but I don't want to read the most popular books - I want to read the best books. I don't think that you can determine which books are the best in terms of quality by asking a lot of people who read books. Instead of relying on Goodreads or my friends and family, I try to find reviewers and literary critics who share some of my tastes and follow their recommendations.

And even they don't always get it right, either, John.

Allegiant? Really? Did people actually read that novel? There was no character development, an odd plot that obviously involved little to no research into what a gene really is, and an ending used just for the shock value. Why did it win?
Well, at least House of Hades by Rick Riordan won for middle grade. But that's the only book that I can honestly say I'm pleased with that won. Then again, I haven't read some of the other authors.

Damieka *Compulsive Book Buyer* wrote: "Allegiant? Really? Did people actually read that novel? There was no character development, an odd plot that obviously involved little to no research into what a gene really is, and an ending used ..."

i agree with you

If you want to read The Dresden Files, start with the graphic novel called *Welcome to the Jungle.* It takes place just prior to the events of Jim Butcher's debut novel *Storm Front* which was also the first novel of The Dresden Files, Damieka.

On the bright side of YA awards— at least

didn't win. I would have lost hope in humanity (or in teenagers?) if that had happened. Of course, I'm no way happy with Allegiant winning either.

Since I have been on Goodreads and receiving these monthly advertising shots I have dip selected the books and found only traditionally published authors. Furthermore, the majority of these authors have lower ratings than many Indies.
Are you being paid by PHs to promote their authors? If so just say it, and we Indies will cancel our memberships and take our readership bases elsewhere as it is our readers you want, not us.

Parmida wrote: "Damieka *Compulsive Book Buyer* wrote: "Allegiant? Really? Did people actually read that novel? There was no character development, an odd plot that obviously involved little to no research into wh..."

Parmida, it is getting to rather like the Kindle Book Review. Whoever stumps up the most money for advertising gets the big review.

That's what i thought too. It's probably a matter of advertising for these books and promoting them.

In a similar way to that which a song hits the top ten without anyone previously hearing it. The label has bought advertising with the radio stations.

"If you want to read The Dresden Files, start with the graphic novel called Welcome to the Jungle."

Or, start with Book 3 if you actually want to get excited about the series. The graphic novel is average, the first 2 books are good but don't show how great the series will become.

I was referring to the actual chronology of events, not how exciting they are..., Jason.

I thought I could actually read books on here, I may be a complete idiot but what idiot gives out their facebook info just so that I can mark somewhere that I read a book..... I still use a notebook.. thanks. Fuck you guys I've been telling my daughter to wait a minute for the last hour... way to go you have the shittiest website ever

Boy, I wish I could find the time and wherewithal to read all these amazing books. Goodreads is such a great site for books and for the promotion of reading books. But still...so many great books...and so little time!

Udemy Course
The OMG Piano course is unlike anything you’ve ever seen. I’ve condensed years of piano training into a step-by-step system that shows you exactly how to start playing, by ear, your favorite songs on the piano in a matter of days. This course, gives you the skills to sound like a polished piano player without having to spend years studying the piano.
Go To here for more info:>> https://www.udemy.com/learn-to-play-t...

I wish I really find time to read all Goodreads books and it is a very nice site to promote all the books: https://www.mytectra.com/