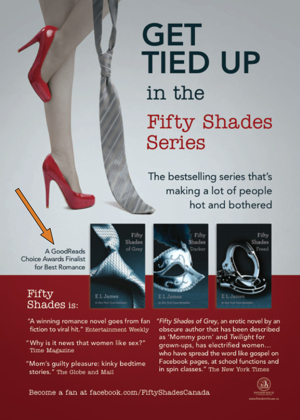 Fifty Shades of Grey poster for the Toronto subway.

When we dreamed up the Goodreads Choice Awards in 2009, our goal was to bring greater attention to books championed by readers. In the most organic way, it's readers who discover great books and share them with friends. Fifty Shades of Grey is a textbook example of a book spreading virally through word of mouth simply because people love it. That's how it earned its nomination in the first place.

When nominations were announced in November 2011, Fifty Shades of Grey had a reasonably sized (but not huge) readership of about 1,000 ratings. It hadn't yet found its magic momentum, but these readers fell hard for this book. The steamy story of a sexual affair between a college student and a wealthy businessman boasted a phenomenal average rating: 4.45 out of 5 stars—the highest average rating of any Goodreads Choice nominee in the 2011 Best Romance category. James ended up placing 2nd in the final round, which is a major achievement for a small press author, considering that the 1st place finisher was J.R. Ward, one of the biggest names in romance writing.

From the first day of its Goodreads Choice nomination, Fifty Shades of Grey saw a jump in readers adding it to their to-read shelves, and the growth never stopped. The to-read numbers continued to climb after the awards completed, and James even visited the site to answer fan questions. Then in March, the novel received mainstream media attention on the Today Show and more press followed. News outlets investigated how an X-rated book about sexual submission went viral. Fifty Shades of Grey is now a bestseller with a new book deal and a film adaptation in the works, and many more readers continue to discover the book on Goodreads. Its average rating dropped slightly as its audience expanded, with a current average rating of 4.14, the amorous novel still earns strong reviews.

We think this is yet one more example of how Goodreads Choice is designed for you—the readers! We also hope that authors such as E.L. James will be able to benefit from their nominations and wins as they market and sell their books. As we announced in February, the new paperback edition of Divergent features its Goodreads Choice win for Favorite Book of 2011 on the cover. So, dear all-knowing reader, what's the next big thing in books? Who is out in front for 2012?

Nick wrote: "*facepalm*"
where is the LIKE/LOVE button for your comment!!!

Sooooo, this isn't a joke?

Maybe a bit of devil's advocate, but, by nature, a Goodreads award is going to have a bit of the "madness of crowds" about it, no? Plus, it's mention is as "Best Romance." Surely you're not going to begrudge it for being voted popular in a popularity contest within its genre for being of its genre?

If it was cheaper i woukld get the book for my kindle. Im not spending 9.99 for a book that ill finish in a day or 2

Francena wrote: "If it was cheaper i woukld get the book for my kindle. Im not spending 9.99 for a book that ill finish in a day or 2"

It was a Twilight Fanficion. If you have strong Google-fu you could probably still find it. For free.

Randall wrote: "Maybe a bit of devil's advocate, but, by nature, a Goodreads award is going to have a bit of the "madness of crowds" about it, no? Plus, it's mention is as "Best Romance." Surely you're not going t..."

This is an atrocity. Just because something gains popularity doesn't mean it is good!

So disappointed that Goodreads picked this.

I have to agree with Emily. Just because it's popular at the time doesn't make it good. It's like comparing the Backstreet Boys to John Coltrane. Which do you think sold more albums or is respected more and stands the test of time better?

This is disgusting. It's a giant blemish on Goodreads. Especially since I'm willing to put money on the fact there were a lot of sockpuppets involved in that Goodreads Choice nomination.

How about we support the real authors on this site who wrote their own stories with their own characters and didn't need to steal from other authors and fan fictions.

Francena wrote: "If it was cheaper i woukld get the book for my kindle. Im not spending 9.99 for a book that ill finish in a day or 2"My wife expressed interest in this the other day. I offered to buy the Kindle version. It was more expensive than the actual book. She went out and purchased all three books and read them all in a day and a half.

Should have just downloaded the original off the Internet. It's free and there were almost no changes.