At This Year's Oscars, Books Steal the Show

Posted by Patrick Brown on February 24, 2012
12 likes · 5 comments
While some of us may be peeved that Bridesmaids wasn't nominated for Best Picture, what we can celebrate is that the literary world is well-represented at this year's Oscars. So, keep your eyes peeled for a few lucky authors on the red carpet. Then again, amidst all the movie stars, they might be easy to miss. They may not score interviews with Ryan Seacrest, but Hollywood still owes them a major debt for dreaming up most of the stories we enjoyed on the silver screen in 2011.

Literary adaptations dominate most of the major categories, including Best Picture. Of the nine nominees up for the big prize, six are adaptations and another, Woody Allen's valentine to the Roaring Twenties, Midnight in Paris, draws heavily from literature, featuring cameos from Ernest Hemingway, F. Scott Fitzgerald, Gertrude Stein, and others. Of the films to receive four or more nominations only The Artist isn't based on a book. Even categories like Costume Design (Jane Eyre) and Art Direction (Harry Potter and the Deathly Hallows Part 2) feature movies adapted from literature. There are so many adaptations nominated this year, it's a wonder that The Twilight Saga: Breaking Dawn Part 1 didn't get a nomination.

In fact, there's a bit of potential history in the works. If The Help is able to win Best Picture at this Sunday's Academy Awards, it will be the most popular book (in terms of Goodreads ratings) ever to win the Oscar for Best Picture. With more than 260,000 ratings, Gone with the Wind currently holds that distinction, but The Help towers over the legendary novel with more than 300,000 ratings. For the record, Vegas doesn't love The Help's chances—it's currently running middle of the pack, with odds anywhere from 12/1 to 25/1. The Artist, one of the few nominees that has nothing to do with books, is the current favorite.

The other adaptations range from bestsellers to relatively obscure books. Here's a graph of the adaptations nominated for Best Picture in order of the number of ratings on Goodreads: 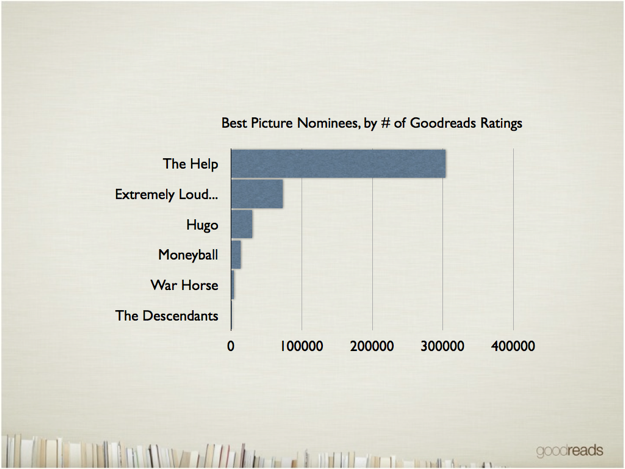 The Help is obviously very popular with Goodreads members. But raw popularity is probably not a great indicator of Oscar success (as we noted last year, relatively few very popular books have become Best Picture-winning movies), though one imagines it must help with the box office. After all, most readers prefer to read the book before seeing the movie. And an Oscar nomination may even give some future readers that extra nudge they were looking for. For instance, both The Descendants and the already popular Extremely Loud & Incredibly Close are currently enjoying a fresh burst of attention from Goodreads members. 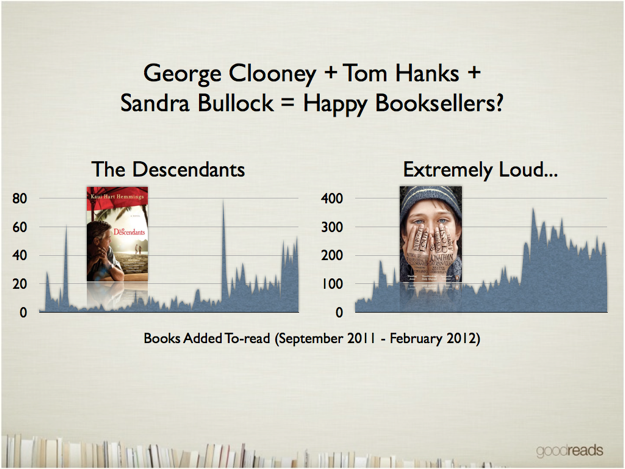 One more exciting note: There are two Goodreads Authors with adaptations in this year's race. Congratulations to both Kathryn Stockett and Kaui Hart Hemmings! As an added treat, Kaui Hart Hemmings will be chatting with Goodreads members on March 13 about what it was like seeing her novel The Descendants adapted for the big screen. Who knows, maybe it will be a Best Picture winner by then.

Who do you think will take home the Oscar? This year, I'll be rooting for movies that were books first. And wishing that Bridesmaids had been nominated. Not that I'm bitter.
Like · 12 likes · 5 comments

I noticed the "adds" for Extremely loud and incredibly close ripple across my friends, and it was amazing to see how a book moves across a social group like that.
Similarly, when I added a couple books, I was the "trend setter" for others to also add. It was a very ego-boosting experience!
Do you have tools on the "inside" that measure this kind of influence? Can you see a particular group spread across the user community? I would image it would look a lot like a bacteria spreading in a petri dish.

Horrible article. Too much commentary from someone whose opinions turned me off. Don't believe Blogs belong on Goodreads. I don't care if you are talking about books Patrick, all you did was write an insulting article about movies. Where is the dislike button?! Wouldn't have even found this if it hadn't shown up in my Facebook feed. Don't think it belonged their either!

What?! Of course blogs belong on goodreads. One of the best part of books is being able to discuss them with other people. And I didn't find anything offensive in this article. I thought it was really interesting, and for someone who doesn't pay too much attention to the nominations, I liked finding out which books were represented. I think I'll have to add a few to my list too...

There was nothing insulting about movies in this post. Books to movies is always interesting and just the chance it will get someone who does not usually read to pick up a book is wonderful. Blogs belong everywhere, in my opionion. The more information people have the better off they are. And, I might add, the more open minded they will be . . .

I always feel a little saddened when a modern novel/movie "overtakes" a Golden Oldie, or is said to do so. Your example of 'The Help' and 'Gone with the Wind' is what is driving my thoughts here, but we see this kind of thing numerous times.

The thing is that quoting numbers isn't a true comparison. It's like saying that wages have gone up dramatically and illustrating it with my current weekly income of $700 (actually, I'm currently unemployed so have NO income, but let's say ...) and what I earned when I was fresh in the workforce and earned the princely sum of $40.

You'll respond with, "But that's the result of inflation," and I'll say, "I rest my case!" The world's population has also inflated in the last 40 years, and I would posit that the reading population has increased much more than that proportionally. And yes, 'Gone with the Wind' has been around for much longer and therefore has had much more exposure to readers, but it never had talk-shows to advertise it, nor online book clubs to spread the word like wildfire.

As a postscript, I saw 'Gone with the Wind' in 1974 but have not read it - I'm not a fan of historical epics and so it's not even on my list of must-read-one-day. I have neither seen nor read 'The Help', though I saw shorts for the movie and am sure I'd enjoy both that and the book. But it's not a comparison that I'm concerned about, it's simply that I think we can't compare them, and really shouldn't use statistics to do so.