"Best of" Lists -- TIME and the Goodreads Community

Posted by Patrick Brown on September 2, 2011
8 likes · 5 comments
This past week, TIME Magazine launched its All-TIME 100 Best Non-Fiction Books. It featured a diverse selection of books -- from Fastfood Nation to I Know Why the Caged Bird Sings to The Elements of Style -- and it has generated a lot of talk across the web. Lists like this are a lot of fun, as they provide a lot of fuel for our to-read shelves. I added couple of books I'd been meaning to read to my shelf yesterday, and it looks like I wasn't alone. Since the list was announced on Tuesday, almost 5,000 people have added over 14,000 books from the list to their Goodreads shelves. Perhaps it's not surprising that so many people felt the need to get reading -- the average Goodreads user has only read 6.7 of the books on the list.

Another reasons lists like this are so fun is that they provide a chance to debate books (And who doesn't love that?). No "best of" or "most influential" list can ever be perfect, so we thought it would be interesting to see where TIME's list differed from what the Goodreads users would have chosen. To start, we looked at a previously existing list on Goodreads, Best Non-Fiction (non biography). For the purposes of comparison, we only looked at the first 100 books on this list (which, incidentally, is over 1,300 books long. As its top book, Goodreads users chose a book that didn't make TIME's list at all, The Devil in the White City. In fact, of its top 10, six of the books on the user-generated list didn't make TIME's list at all. In total, there are only 17 books in common between the two lists. They are:

In case you're curious, the average Goodreads member has read 10.6 of the books on the "Best Non-Fiction (non-biography)" list. One thing that's interesting to note is that, while many users added books from the TIME list to their shelves, the shelf they added them to varies from title to title. For instance, the popular The Elements of Style was the one of the most added books from the list, but many people not only added it but rated it, as well. This implies that they've actually read the book but hadn't added it to Goodreads yet: 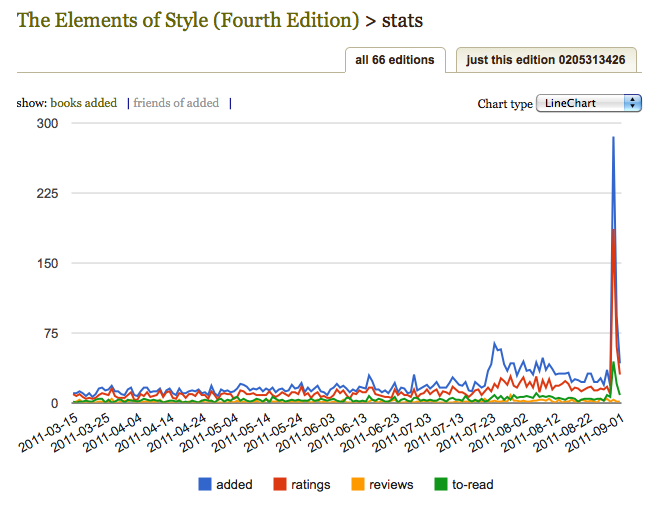 In contrast, the relatively obscure The Paranoid Style in American Politics by Richard Hofstadtler was added to plenty of shelves, but most people marked it "to-read." 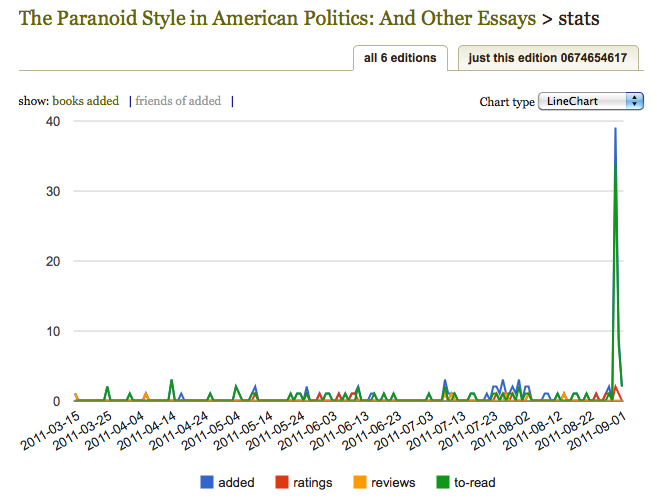 My own personal "best of" non-fiction list would probably be a hybrid of the TIME list, which I think did a fine job of choosing influential books, and the user-generated list, which I was happy to see includes the excellent Homicide by David Simon and We Wish to Inform You That Tomorrow We Will be Killed with Our Families by Philip Gourevitch. I would also choose Clay Shirky's influential Here Comes Everybody. I might also include The New Bill James Historical Baseball Abstract. What? It's a good book! What books would be on your Best Non-Fiction List?
Like · 8 likes · 5 comments

And in a technical note, two of the list titles in the blog post are, um, wrong. The DF Wallace is " A Supposedly FUN Thing etc.", and the Jared Diamond is "Guns, Germs and STEEL." Not Death. Although in the latter case, I can see how a reader might remember it that way...

I'm afraid I have only read 4 books of the 17 mentioned in this post. I read non-fiction books about music, biography and history and don't see many - or any - of them in either list.

I'm embarrassed to admit I've only read 14 of the top 100, and that is if you include Elements of Style, which I suspect very few people have actually "read", but many have used. There were several that I started but didn't finish. Added a few to my list, though.

Hey, a blogger who actually reads comments and acts on them!
(I was glad to see I wasn't the only pedant correcting titles misspelled.)