That sound you might have heard last night at midnight was hundreds of thousands of people rushing to their local bookstores or turning on their Kindles and Nooks to begin reading one of the most highly anticipated books of the year. Yes, today is the day that the latest installment of George R.R. Martin's immensely popular series A Song of Fire and Ice, A Dance with Dragons, is released. And not surprisingly, Goodreads members have flocked to add it to their shelves: 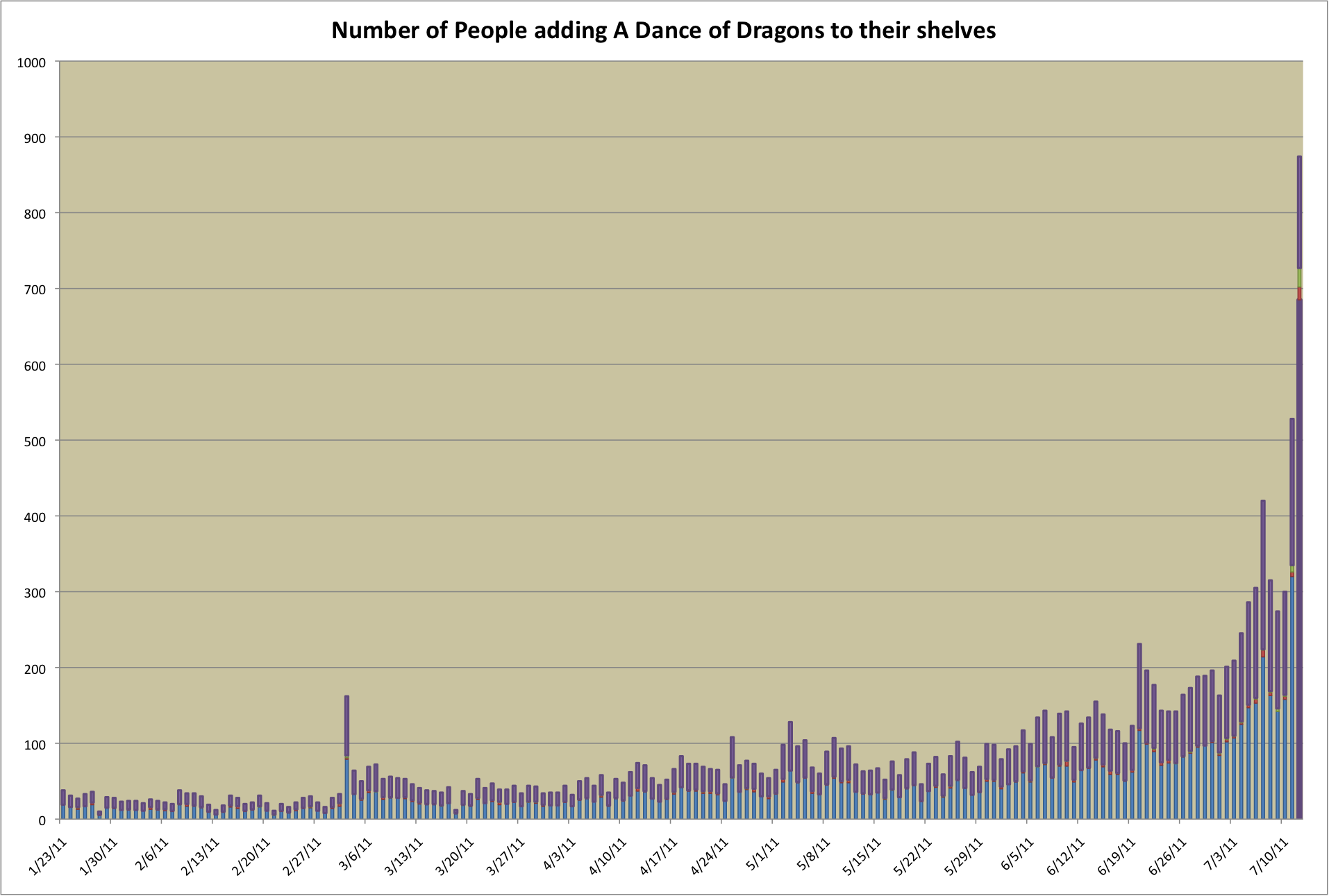 That's a serious one-day spike for any book, but it's doubly impressive for such a heavy tome (Dragons weighs in at more than 1000 pages).

What's drawn people to this volume? Obviously, they're eager for the story to continue, it seems likely that the book has also experienced a spike in popularity after the HBO adaptation of the first book in the series, A Game of Thrones. Adaptations usually expand the audience for the adapted work, and this is likely no exception. Indeed, dozens of Goodreads members mention the HBO series in their reviews of the book. Interestingly, a New York Times article suggested that the show had been sexed up to appeal to female viewers who might not be fans of the book:

"The true perversion, though, is the sense you get that all of this illicitness has been tossed in as a little something for the ladies, out of a justifiable fear, perhaps, that no woman alive would watch otherwise. While I do not doubt that there are women in the world who read books like Mr. Martin’s, I can honestly say that I have never met a single woman who has stood up in indignation at her book club and refused to read the latest from Lorrie Moore unless everyone agreed to “The Hobbit” first. “Game of Thrones” is boy fiction patronizingly turned out to reach the population’s other half."

After the significant internet outcry over this story, we looked at the demographic breakdown of readership for A Game of Thrones and found that better than a third of the book's 30,000 readers were women.

So what is Martin's appeal? Some readers liken him to an American Tolkein. John Wiswell, in his Goodreads review of the book, says "This may be the best Fantasy I've read since J.R.R. Tolkien. I highly recommend it to any fans of the Lord of the Rings series who have been disappointed by the other supposed epics that have shown up since." And Goodreads staffer Louise says "A Game of Thrones is one of the best fantasy novels I’ve ever read. This may sound like high praise especially after only reading the first book of the series, but A Song of Ice and Fire series may just well be the Lord of the Rings of my generation." And Ethan Miller suggests that the series deserves a place in the canon: "If Science Fiction and Fantasy weren't considered silly step children to those that define what is "Great" in the western literary cannon than the first three books of this series would surely rank amongst the greatest works of the last 25 years."

Whatever the appeal, it's clear that A Dance of Dragons is one of the hot books of the summer. Is it on your to-read shelf?
Like · 11 likes · 6 comments

No and it never will.

For the statistics: I'm a girl who got into George R.R. Martin's book series A Song of Ice and Fire thanks to the HBO production, and yes, I most certainly did enjoy the serious sexiness of sexy scenes with Khal Drogo. But I also enjoyed most of the rest.

As to A Dance of Dragons, I shall make an informed decision on whether I want to read it once I've finished the first four books - and I'm still working on the first right now.

I knew nothing of the series until I watched the first episode of Game of Thrones on HBO. I immediately downloaded the book and read the first four books in a month. I am a woman who really enjoyed the characters in the books and the ways that they are entwined throughout the books. I will be getting the latest book today and look forward to catching up on the characters that were omitted in the fourth novel.

The true perversion, though, is the sense you get that all of this illicitness has been tossed in as a little something for the ladies, out of a justifiable fear, perhaps, that no woman alive would watch otherwise.

The author of that article has got to be kidding. For the ladies? We've nicknamed it Game of Breasts around here for all the gratuitous naked women - that scene in the whorehouse with Littlefinger didn't exist in the books, and was strictly there as a ratings booster, not to mention the "education" scene with Daenerys and her maid.

I already have it on TBR :)
I never watch the series but it's supposed to be very good... maybe I'l watch it someday :) It's gonna take a long time before I will read this book.. I have over 1100 books on my TBR :)
But the story sounds interesting enough :)

I was among those tortured souls who started reading this series and then had to wait 5(?) years for Dances to come out. It was worth it. Swords and sex initially drew me into Game of Thrones, but it was the characters and plot twists that kept me reading the others. GRRM is a master story teller to me. Favorite sentence in DWD that I have ever read: "A reader lives a thousand lives before he dies." Love that! (And if it needs clarified: I'm a female Pat)