Posted by Otis Chandler on May 22, 2011
12 likes · 12 comments
Amazon released a big milestone on thursday by saying:

We decided to see if we could mine our own data and find a similar trend. After analyzing 19 million books people have marked as finished on Goodreads over the past three years and the 22 thousand books members currently mark as as finished each day, we found some pretty explosive looking ebook growth: 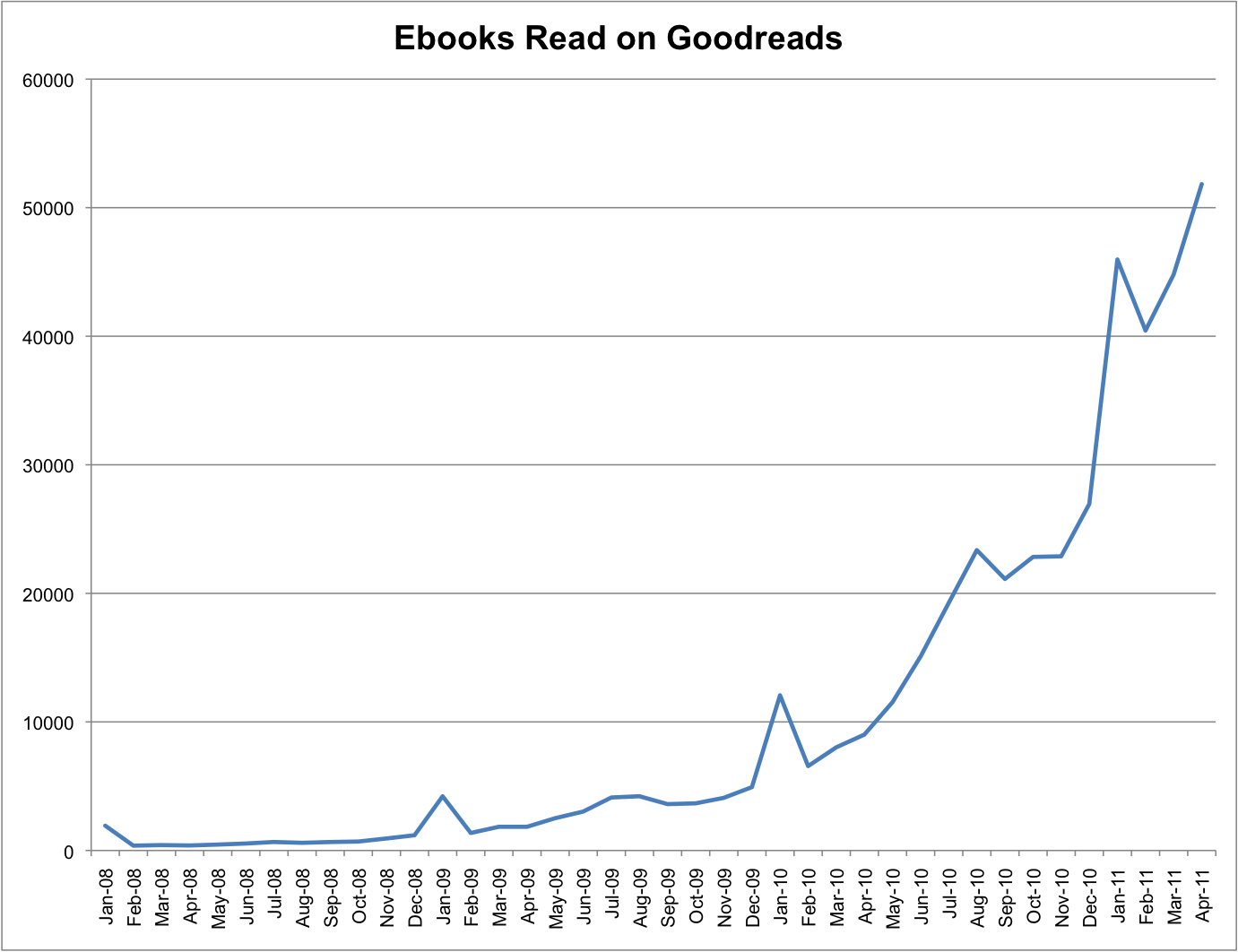 The number of people who are reading ebooks in 2011 went up 163% over last year, and 36% up over the 4 months prior to 2011. This kind of growth is exciting and disruptive, and signifies that the publishing industry, which hasn't really changed in hundreds of years, is changing rapidly right before our eyes.

We should note that the numbers in the graph are probably actually higher, as not all members pay close attention to the format they catalog, and the hardcover edition is often the default. The trend however, is pretty clear.

Our data may confirm Amazon's trend report, but there are a few caveats that are important to keep in mind before we start declaring print is dead. Book readers buy books in all kinds of places, not just on Amazon. Recent news shows that the major publishers are seeing about 20% of their sales from ebooks. Recent internal surveys we have run show that people are still buying plenty of books from local bookstores and borrowing lots of books from the library.

Let's look at the Amazon data versus Goodreads data from one other perspective. As you know, at Goodreads we are more concerned with what people are reading rather than what people are buying. As such, we analyzed our database for the top read ebooks of 2011:

It's telling to note that two of the top 10 most read ebooks on Goodreads in 2011 have an explicit connection to Amazon. The Hangman's Daughter, ranked fourth on the list, was published as part of Amazon Crossing, the e-retailers publishing imprint that specializes in repackaging popular titles from other countries and translating them. The ninth book on our list, Fate, is by Amanda Hocking. Hocking is a self-published author who until recently only sold her books online through the Kindle and other online stores. Earlier this year she made news when she revealed that she made over a million dollars last year.

Based on our data, Amazon's statement, and other industry analysis, we think authors should look closely next time they open a fortune cookie. Perhaps it will say; There are ebooks in your future, and profits on the horizon.
Like · 12 likes · 12 comments

This is why I love GoodReads. You gave us the story, the data, but then in reaching the conclusion you didn't just drink the Kool Aid and go for a walk. Critical thinking kicked in. Ahh, love GoodReads!!

I've been active on GR for five years, and still don't know how to recognize format, perhaps an enhancement is in order? I just keep a separate shelf for audio.

As someone who is losing their vision, I have found e-books to be a little bit of a saving grace for me. I can enlarge the fonts on my e-reader and not struggle nearly as hard to do what I love (read). Large print books may rapidly become a thing of the past thanks to e-books.

Interesting, and I think you're absolutely right that the percentage of ebooks read is even higher. I have 341 books on my Goodreads shelves and I estimate probably 80 of them were read as ebooks but I never bothered to mark the format. In some cases, like with Chris Beckett's THE TURING TEST, I could only find one version, and it was print.

What I find remarkable about this list, Otis, is that 7 out of the 10 books are (or were at one point) "lendable" in Nook/Kindle catalog. Amanda Hocking's books, The Hangman's Daughter, and The Hunger Games series are currently the most popular borrowed books at http://eBookFling.com. Subsequently they are also the most available to be loaned from eBookFlingers who own copies. The Stieg Larsson series were once "lendable" when eBookFling first launched and at the time, represented the most-borrowed.

Amazon book lending launched in January this year. Just take a look at the spiking graph here. I believe that ebook lending can lead to ebook sales and this Goodreads analysis helps support this thesis.

when you are viewing a book julie, on the right side of the screen it will say "other editions" that is how you change it.

I'm no statistician, but of course, Goodreads's membership has grown quite a bit during this 3 year period as well, also in a more or less non-linear way. I think to give meaningful numbers, you'd have to correct for that, and possibly also show a comparison against traditional books read during the same time period. Otherwise, this graph doesn't really show anything.

With "The number of people are[sic] reading ebooks in 2011 went up 163% over last year", the same could be true. Looking at the *percentage* of total active users reading ebooks within the same time period last year might be a little more meaningful.

@Michelle, I can see the other editions, but over 50% of my books are via Overdrive WMA Audio, which I have yet to see as an option. Personally I don't care if it's MP3 or CD or WMA, since they're usually identical recordings.

@will you are right - and we did correct for overall growth

Julie ~ you can always sign up to become a goodreads librian and then you can add the edition that you are reading yourself and others will be happy you did and can choose it as well. =) I can't stand when my book doesn't match up with what edition i'm reading. It bugs me. I dont' know why... it will just eat at me all day, so I decided to do exactly what I told you to do, so then if I can't find my edition, i just add it! =)

The number on the vertical axis makes it look as if that axis represents the absolute number of books read "on" Goodreads. If you corrected for changes in the # of users, I guess the number means something else?

As an aside, I think this terminology (read "on" Goodreads) is also a little potentially confusing, since most of these numbers don't refer to the books read using Goodreads's ebook reader, but ebooks which users of Goodreads read offline and posted about on GR.

Basically, while Goodreads has a very diverse membership and its members tend to be tech-savvy, it may not provide a representative sample of the general population.