Posted by Patrick Brown on December 8, 2010
2 likes · 15 comments
The end of the year is nearly upon us. Here in the US, the weather is getting cooler (yes, even in California), the days are getting shorter, and the holiday season is underway. One sign the season has begun is the deluge of year-end, best-of lists. The New York Times has released its 10 Best Books of 2010, and the Goodreads Choice Awards are up and running, already having received over 64,000 votes.

One of my favorite end of the year series is The Millions Year in Reading. I like it because it focuses on the best books people read in 2010, regardless of when they were published. After all, not everyone reads only the latest, newest books. Many of us are still working our way through the hot books of 2000, let alone the bestsellers from 2010. In fact, books are unique, in that a reader in 2010 might finish Eat Pray Love, a bestseller from 2006, one day and begin Pride and Prejudice, first published in 1813, the next.

With that in mind, we thought it might be fun to look at when the books people enjoyed in 2010 were published. This is a graph that shows the number of reviews posted on Goodreads in 2010 sorted by the publication date of the book being reviewed: 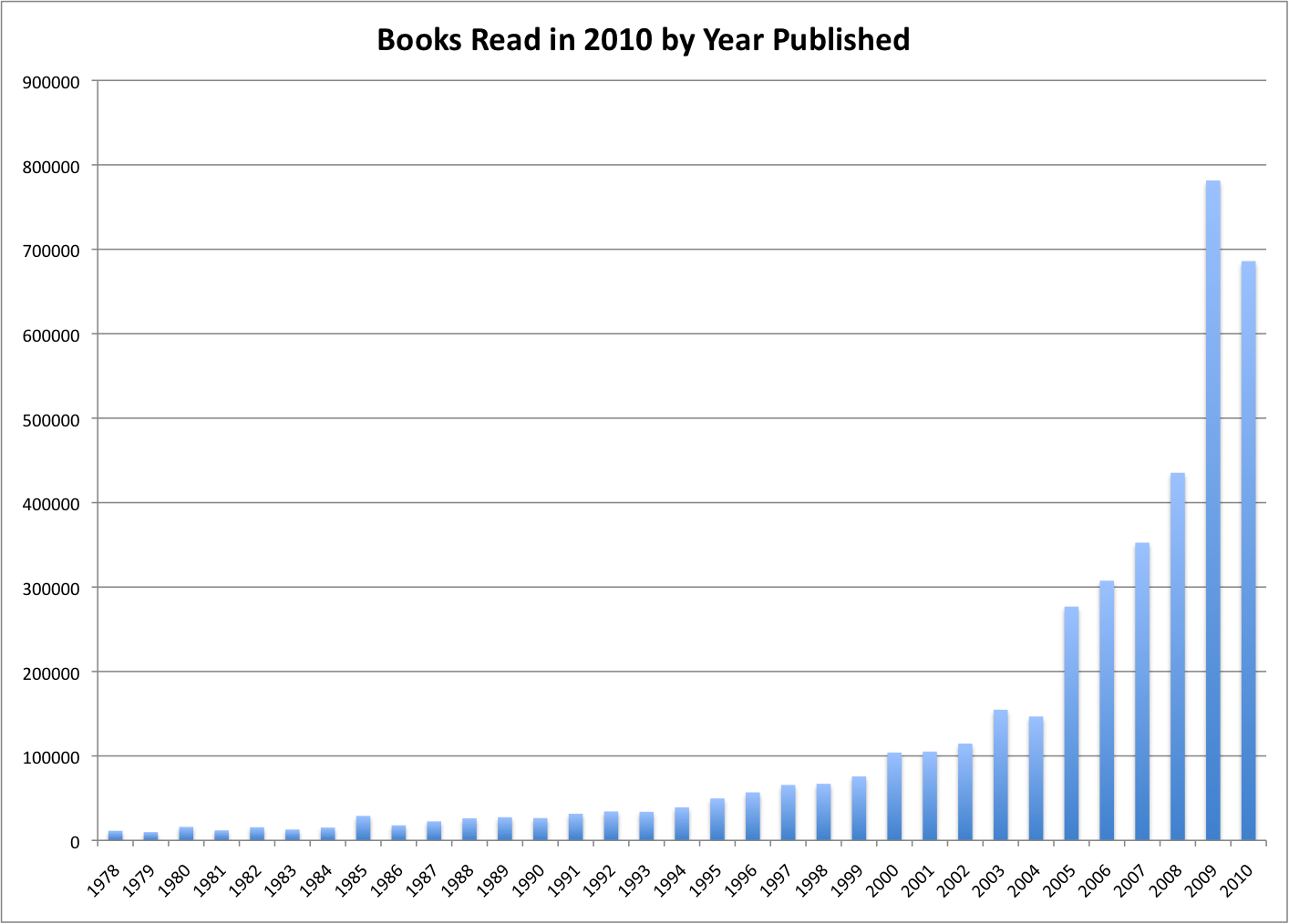 As you can see, Goodreads users read more books from 2009 than from 2010, with books from the past decade being quite a bit more popular than books from the decades preceding it. A few interesting notes:

And just for kicks, take a look at the long tail of books read in 2010: 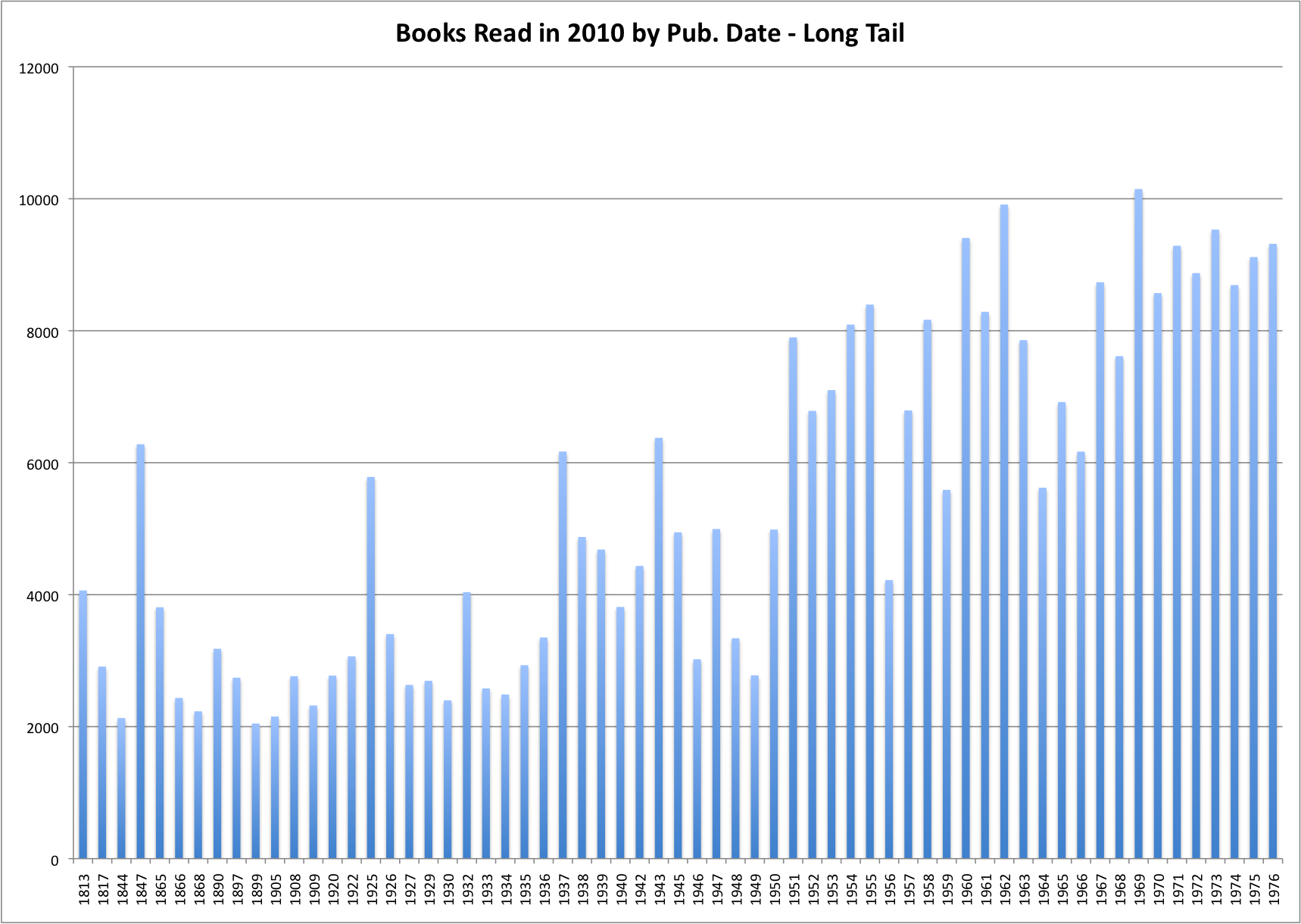 You can see that it generally follows the same pattern as the more recent years, with books from the 1960s and 1970s being more popular than books from earlier in the century, and so on, but the data is much noisier.

How do your reading habits stack up against the rest of the site? Do you tend to read newer books or do you stick to the classics?
Like · 2 likes · 15 comments

I'm reading more classics, because I can get them for free on my Kindle! I do also own a great many in hardcover or paperback - I'm less thrilled with newer books.

Does Oprah Book Club selections have an effect? Grapes of Wrath comes to mind. It will be interesting to follow her new selection.

I keep a list of books I've read by date and your data matches my data. 2009 was by far my most popular year for books for my 2010 reading with 2010 coming in second.

noddy and big ears is illuminating.

Do you think the preponderance of 2009 books read this year can be attributed to 2009's hardcovers coming out in paperback in 2010? Or are you counting this year's paperbacks as 2010 publications?

Pamela wrote: "Do you think the preponderance of 2009 books read this year can be attributed to 2009's hardcovers coming out in paperback in 2010? Or are you counting this year's paperbacks as 2010 publications?"

Are the pre-1950 spikes accounted for largely by one or two books in each case? 1847 is Jane Eyre and Wuthering Heights, presumably; 1925 must be The Great Gatsby; what are 1937 and 1943? 1937 might be largely Of Mice And Men, but I can't find anything from 1943 that would make it so popular, unless everyone is reading The Glass Bead Game or Being and Nothingness, which I didn't think they were.

Just what I was wondering. Fascinating.

ETA: 1865 is probably Alice in Wonderland.

Not just a booklover, but a nerdy one at that! Love a chart that makes me crawl through my bookshelf trying to see how I compare with the masses.
I'm one of those people who generally likes to wait for the second versions of things. I guess that means I usually go paperback too. Unless it's an author I adore, like David Mitchell, and I'll do something rash like pre-order before it's even published.
My other tendency is to admire my new books, let them settle on my shelf for a bit, and then pull them out to read when I'm in the mood. I've got 145 unread books on my shelf at the moment -- give or take -- and I guess some need more ageing than others. Kind of like wine, maybe?

(now, on a completely unrelated topic, who do I need to talk to to get this site to allow halves in the star ratings? There's a massive difference between a 3 and a 4 and sometimes it really needs a 3-1/2)

I read a bit of everything, and tend to focus on those books my friends recommend to me. I mean that's wut goodreads is all about right?

I wanted to figure out how I could do this for my own books, so I had a play around with Excel. (Yes, I have nothing better to do, but it only took 5 minutes)

If anyone cares, here are my graphs for books read in 2010. Should you also have nothing better to do and want to know how to do it, send me a message. 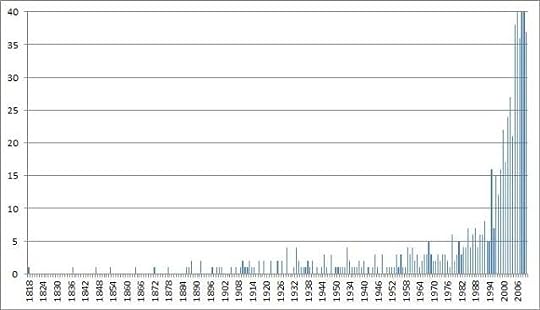 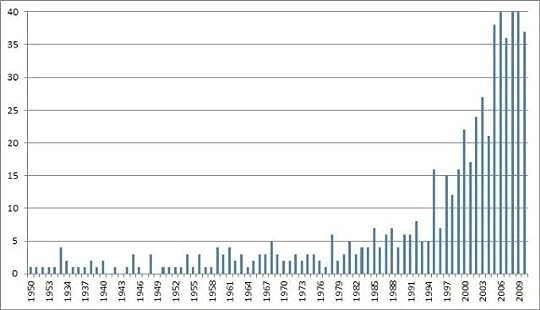 My reading habits vary greatly. Most of the books that I read are ones that I stumble upon in the bookstore, or books that have been recommended to me. Many times I will read reviews posted by other readers to get a general feel to the story especially before I go out and buy a series. (I'm one of those readers who, normally, if I want to read a series, I must get ALL of the books - or at least all that are available - prior to me starting) So generally I do not read too many "fresh off the presses" books, unless I receive them as an ARC, or I have been waiting on it as a sequel.

I have quite a few books that I bought and am waiting to read because there are just so many wonderful books to read that I may be interested in a book on week, and something else that really captures me is brought to my attention, and last week's book is put back on the shelf for a while. I do get around to them, but I must satisfy my "gotta read it now" impulses.

Dana wrote: "Not just a booklover, but a nerdy one at that! Love a chart that makes me crawl through my bookshelf trying to see how I compare with the masses.
I'm one of those people who generally likes to wai..."


And I completely agree with Dana!! A half star rating option would be so much nicer to have. She is correct. There are HUGE differences between the stars, and being able to utilize a more accurate rating system would be fabulous!!

Thanks for your support Amy. I've been reading threads on half stars for a number of weeks now and it seems some people are frightened of them. I reckon give us the option, and those who want it can use it, and those who don't don't have to. But that's just me...