Posted by Patrick Brown on June 4, 2010
4 likes · 4 comments
Last week, the Goodreads team traveled to New York for our first ever event outside Southern California. After the success of our first Literary Pub Crawl we figured a similar event would be the perfect way to say hello to our New York City members. And we were right!

The evening began at Housing Works, as folks poured in, grabbed a drink and started mingling. It was great to see so many people eager to meet and talk about what they were reading! Much of the Goodreads team had just spent three whirlwind days at Book Expo America (BEA), the book industry's annual conference. This year, many people wanted BEA to open its doors to the people who actually make the industry go -- the readers. As I stood in Housing Works, surrounded by books from floor to ceiling, listening to writers and publishers talking to actual readers about their favorite books and what they were reading, it occurred to me that this is what many people wish BEA could be.

After an hour or so of bookish conversation, it was time for the readings to begin. Emily St. John Mandel kicked things off with a few pages from her new literary thriller The Singer's Gun. Amy King followed with a few poems, including some that were thematically realted to the night's festivities. 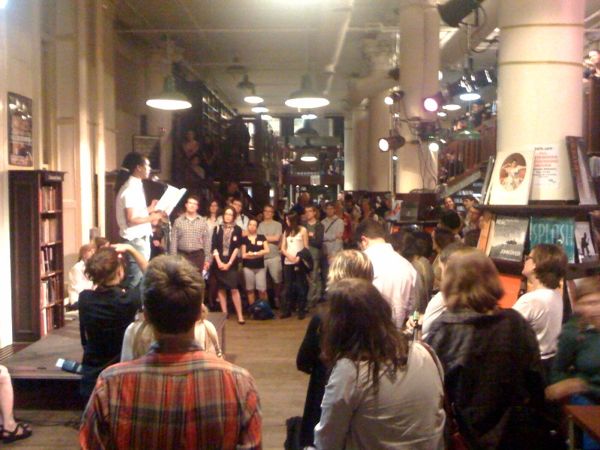 Finally, Colson Whitehead took the stage. He announced that he was going to read from his latest novel, Sag Harbor, "which has an average rating of 1.25 stars on Goodreads," he said (He was joking; the actual average star rating is 3.41). The passage he read was beautiful and hilarious and the perfect thing to send us off into the night.

Following the readings, we all headed to the other bars on the crawl. Some of us met new friends, some of us connected with old friends, and many of us had to explain why we were wearing stickers that said what book we were currently reading.

The event was a huge success, and a few literary celebrities turned out to do a bit of crawling. The Wall Street Journal even wrote about the event. It was a great evening, and thank you so much to all who attended! We hope to see you out at the next crawl.
Like · 4 likes · 4 comments

How absolutely fantastic is THIS. You guys are outstanding. These evenings will actually wake up the publishers to the many, many people who are STILL out here reading away as fast as they can read. And then, not to mention, there's all the social fun of events like this! Thanks for sharing.

A little angry I missed it. When will the next one in NY be?

Are you going to other cities sometime?

Unfortunately not. I live in South Korea, but I'm going back to NYC for a few months. Trying to catch as many book related events as possible. Though I missed this one...